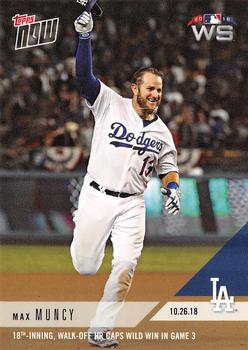 Because the third game of the 2018 World Series was being played in a National League city, NL rules applied – which meant there was no designated hitter. Red Sox manager Alex Cora elected to have J.D. Martinez play left field and Andrew Benintendi remain on the bench.

Both teams started right-handers, Walker Buehler for the Dodgers and Rick Porcello for the Red Sox. The Dodgers put their power hitters into the lineup. None of their four top homer hitters had started in either Game One or Game Two – Joc Pederson, Max Muncy, Cody Bellinger, and Yasmani Grandal.1

Buehler had started 23 games for the Dodgers and finished the season 8-5 with a 2.62 ERA and a WHIP of 0.961.2 He had struggled in his first two postseason outings but had started Game Seven of the NLCS and allowed just one run in 4⅔ innings. He set down the first six Red Sox batters in order, though it took him 26 pitches to get through the first inning.

Porcello walked Muncy in the first inning, but he was the only batter who reached base in the first two. Porcello (a Cy Young Award winner for Boston in 2016) had been 17-7 in the regular season, but with a 4.28 ERA and a WHIP of 1.176.3

In the third inning, the Sox singled twice, but Jackie Bradley Jr. was out trying to steal second after the first single. Porcello laid down a sacrifice bunt to move Christian Vazquez to second, but Buehler got Mookie Betts to fly out to center.

In the bottom of the third, with two outs, the Dodgers took a 1-0 lead when Joc Pederson swung at the first pitch and homered down the right-field line.

No one reached base for either team in the fourth, nor in the Red Sox fifth. When Pederson came up again in the bottom of the fifth, with two outs and no one on, lefty Eduardo Rodriguez relieved Porcello and struck out the Dodgers batter.

Buehler worked through the sixth and seventh, one-two-three in both innings. He had thrown seven shutout innings with just two hits and had not walked a man. The Red Sox had Joe Kelly work the sixth and Ryan Brasier the seventh. Matt Kemp pinch-hit for Buehler and grounded out for the third out of the bottom of the seventh.

Chad Finn of the Boston Globe wrote of Buehler’s effort that when he “came out after 108 pitches, it felt like a reprieve for the Red Sox.”4

Kenley Jansen took over pitching for Los Angeles. He’d had extraordinary bad luck in 2018, the team’s closer with a season ERA of 3.01 but a record of 1-5. After getting two outs, he served up a 2-and-0 pitch to Jackie Bradley Jr., which the Red Sox center fielder pounded a few rows deep into the right-field seats.

Matt Barnes pitched the bottom of the eighth for the Red Sox. A single was the only base hit.

Jansen retired all three Red Sox batters in the top of the ninth. Alex Cora turned to David Price to pitch the bottom of the ninth.

The Red Sox were doing a great deal of defensive shifting, starting in the eighth. When right-hander Manny Machado came to bat with two outs, center fielder Bradley had moved to left, Mookie Betts moved from right to center, and J.D. Martinez moved from left over to right. Machado struck out. In the ninth, the three outfielders all moved back to their original positions, but with two outs and a runner on, and Craig Kimbrel – who took over for Price – walked Chris Taylor, they all shifted again with pinch-hitter Brian Dozier at the plate. Dozier fouled out to the catcher and the game went into extra innings.

J.D. Martinez left for a pinch-runner in the top of the 10th. No one scored, thanks to a terrific throw home from Bellinger in center field.5 There was more shifting come the bottom of the 10th.6

Both teams worked a base on balls in the 11th. No one scored. The 12th inning saw three-up, three-down for both teams.

In the 13th, the Red Sox scored a go-ahead run. Leading off, Brock Holt walked. And stole second. Eduardo Nunez hit a ball that took a high chop and came down in the no-man’s land between the pitcher’s mound and first base. Both ran to field it, pitcher Scott Alexander grabbing it and then tossing to the second baseman covering the bag at first. Holt easily made it to third. Nunez was safe on a close play and the throw went astray (error on Alexander); Holt ran home. It was 2-1, advantage Red Sox. Despite a later double and an intentional walk, the Red Sox couldn’t add to their score. Xander Bogaerts ended the inning by grounding a ball about two feet in front of the plate. The catcher picked up the ball and stepped on the plate to force out the runner coming from third.

Sandy Leon came in to catch for Boston, with Vazquez taking over at first base. Scheduled Game Four starter Nathan Eovaldi was pressed into action. He pitched an eventless 12th, but ran into some trouble in the 13th with a walk. With one out, Bellinger hit a foul ball that third baseman Nunez caught – but fell into the stands while doing so.7 Muncy alertly tagged up at first and took second base on the play. But there were two outs. Yasiel Puig came up. He hit an infield grounder toward the middle that could have produced the third out, but Ian Kinsler stumbled on the somewhat “cushiony” turf (the word was Roberts’s) and threw the ball well wide of first base – an error that allowed Muncy to score, tying the game, 2-2.8

Each team had scored one run in the 13th, and both runs came on errors.

The game kept going. Dylan Floro had gotten the Dodgers out of the 13th; he set the Red Sox down in order in the 14th. Eovaldi gave up a single, but no more.

Kenta Maeda pitched the 15th for Los Angeles. David Freese had pinch-hit for Floro. He took over at first base, Muncy moved to play second, and Enrique Hernandez moved to left field. With an infield single and a walk, the first two runners got on. Vazquez laid down a very good bunt, but Maeda pounced on it and fired to third base for an out. Maeda then struck out the next two Red Sox. Eovaldi struck out two (though a foul ball by Muncy came close to going out) and got a popup to second base.

Maeda struck out all three Red Sox he faced in the top of the 16th, and Eovaldi retired the side in order, too. The game passed the seven-hour mark. The Red Sox had only one pitcher left in the bullpen, Drew Pomeranz. Eovaldi was the ninth pitcher Boston had used.

Julio Urias relieved Maeda in the 17th. The only one to reach base was Bradley, on a two-out walk. Eovaldi retired the three batters he faced, one of whom was Clayton Kershaw, pinch-hitting for Maeda. He made contact, but lined out to right field.

It was the 18th inning. Alex Wood took the mound for the Dodgers, their ninth pitcher of the game. He walked Leon. The Red Sox had two good hitters up – Mookie Betts and Xander Bogaerts. Eovaldi was the next one due up. Betts grounded into a force play at second base. Eovaldi had already pitched six innings. The Red Sox were going with him all the way. They had no one up in the bullpen and he was in the on-deck circle. Bogaerts hit into a 6-4-3 double play.

Eovaldi faced Max Muncy leading off the bottom of the 19th. He had already thrown 90 pitches in relief, but he was still throwing heat. Fox announcer Joe Buck noted pitches of 97 and 98 miles per hour. The count went to 3-and-2. On his seventh pitch of the at-bat, Muncy homered to left-center. The game was over. Angelenos who had stayed up past midnight (gasp!) could finally go to bed. In New England, the game ended at 3:30 A.M.

It had been the longest World Series game of all time, both in terms of innings played and in time elapsed (7 hours 20 minutes). Between them, the two teams had used 18 pitchers. Most of the Dodger Stadium crowd had stayed until the end.

“We’re feeling pretty good about ourselves right now,’’ Dave Roberts said after the game. “Considering where we’re at … I think there’s a little bit of momentum on our side.’’9

Back in Boston, Eovaldi was lionized for his heroic effort.10

In addition to the sources cited in the Notes, the author consulted Baseball-Reference.com, Retrosheet.org, and a YouTube broadcast of the game.

1 All four of them had appeared in both games, though, coming in as pinch-hitters or defensive replacements. In those games, they batted a combined 1-for-11. Three of them were left-handed hitters; Grandal was a switch-hitter. The quartet had hit 109 regular-season home runs.

5 “I was glad I had a chance to redeem myself,” he said after the game. “I would not have been able to sleep.” He was referring to his baserunning gaffe in the bottom of the ninth. Bill Plaschke, “Max Muncy and the Dodgers’ 18-Inning World Series Victory Changed Everything,” Los Angeles Times, October 27, 2018.

6 Ian Kinsler had been the pinch-runner. He stayed in the game to play second base. Brock Holt, who’d been at second, went out to left field. Eduardo Nunez, who had pinch-hit for Rafael Devers and hit into an inning-ending double play, played third base. Bradley moved from left back to center, and Betts moved over from center to right. After Muncy hit a two-out double, Bradley moved to left, Betts to center, and Holt from left to right. Machado popped up to short. By the end of the game, Betts – to name one fielder—had been shifted six times.

7 Nunez was taking a beating. It was the third time in the game that the trainer had to come out to look at Nunez – and he’d only come into the game in the 10th. Before tumbling into the seats, he’d earlier been knocked over by the catcher at the plate and had later fallen while running over first base. Rick Porcello said he jokingly told Nunez, “Get up. We’re tired of watching you roll around in the dirt and then be fine.’” After the game, Nunez said, in Spanish, “I’m a little injured but we don’t have any other options. We have to play. We have to win two more games. … You have to give it your all.” See Maria Torres, “Eduardo Nunez Has a Rough Time in Game 3,” Los Angeles Times, October 27, 2018. Torres quoted Nunez after the game: “We have three months to recuperate.”

8 Needless to say, an opponent scoring from second on an error in a World Series game reminded many Red Sox fans of Game Six of the 1986 World Series. Dan Shaughnessy, “After This Stunner, It’s a Series,” Boston Globe, October 27, 2018: A1, C4. As to the turf quality, see Peter Abraham, “David Price Announced as the Game 5 Starter,” Boston Globe, October 28, 2018: C16.

10 See, for instance, Nick Cafardo, “Eovaldi Heroic in Defeat,” Boston Globe, October 27, 2018: C1. “Never been more proud of a teammate than I am right now,” wrote David Price on Instagram. See Peter Abraham, “David Price Announced as the Game 5 Starter.” Abraham quoted Rick Porcello as saying, “After the game I started crying, because that was … I mean, he’s grinding. Every pitch. He literally gave everything he had on every pitch. … That’s the epitome of reaching down deep.”