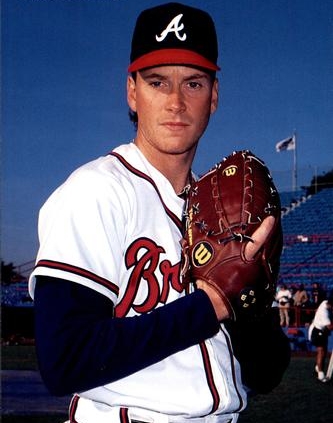 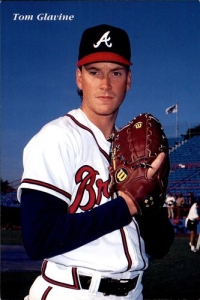 It was only fitting that Tom Glavine was on the mound for the Atlanta Braves in Game Six of the 1995 World Series.

After all, he was on the mound during the franchise’s leanest years, leading the National League in losses in 1988. He was on the mound for the Braves’ dramatic turnaround in 1991, winning the NL’s Cy Young Award for the first time. And he was on the mound in 1995 when major-league players returned to the field after a costly labor dispute that had canceled the previous year’s World Series. Throughout the season, Glavine was booed by the hometown fans for his outspoken role as a representative for the players union.

As the longest tenured player on the Braves World Series roster,1 Glavine had seen it all. On their shared car ride to the ballpark the previous day, teammate Greg Maddux told him “how glad he was that I was getting a chance to win it, that I deserved it, the fact that I had been here longer than anybody. … A lot of people have come up to me and said this is the perfect game for me to pitch. Certainly, this is a unique opportunity,” Glavine said.2

If all eyes were on the Braves’ starting pitcher, their fans’ ears were all tuned in to David Justice. The star right fielder made headlines on the morning of Game Six with a controversial rant about the lack of support from Atlanta’s home crowds during the fall classic:

“What happens if we don’t win? When’s the parade then? They’ll run us out of Atlanta. … If we don’t win, they’ll probably burn our houses down. … If we get down 1-0 tonight, they will probably boo us out of the stadium. You have to do something great to get them out of their seats. … I’m the only guy that will sit here and say it, but there are a lot of people that feel this way.”3

Glavine was far more diplomatic, pointing out that Indians fans in Cleveland were giddy about snapping their 41-year World Series drought and that Braves fans had been just as enthusiastic a few years earlier: “I don’t think it’s fair to expect our fans to be the same as in 1991. … You can’t recapture that,” he said.4

If Justice’s intention was to fire up the sellout crowd of 51,875 at Atlanta-Fulton County Stadium, he certainly accomplished his goal. He was loudly booed during player introductions and one fan behind home plate held up a sign that read, “Justice, hope your bat is as big as your mouth!”

The biggest bats in baseball belonged to the Cleveland Indians, who led the major leagues in nearly every offensive category during the regular season. Their .291 batting average was the highest by any team since the 1950 Boston Red Sox. After beating Maddux in Game Five, the Indians returned to Atlanta with a confident outlook. Glavine took it personally when some Cleveland players said they had already beaten the Braves’ best pitcher.5

On a crisp 56-degree night, Glavine coolly dispatched the Indians from the moment he took the mound in Game Six, holding the Tribe hitters helpless with his trademark circle changeup. Through the first five innings, he didn’t allow a hit at all. His only blemishes were two walks to Albert Belle, Cleveland’s powerful cleanup hitter.

Home-plate umpire Joe Brinkman, who had never called a Glavine start during the regular season,6 said the Braves left-hander lived up to his reputation for making hitters chase outside pitches.

“Tommy had a lot of pop on the outside corner,” Brinkman said. “He just kept popping guys, outside, outside, outside. … He can lull you to sleep out there and finally, as an umpire, you have to say, ‘Okay, that’s as much as you’re going to get out there.’ … It was the most masterful performance.”7

Tony Peña finally ended Glavine’s bid for a no-hitter to lead off the sixth inning, poking a soft single to right-center field. But Glavine worked around the base hit to keep the game scoreless.

Meanwhile, the Braves could do little damage against Indians starter Dennis Martínez. The 41-year-old right-hander from Nicaragua flirted with danger, allowing four hits and five walks in 4⅔ innings, but Atlanta could not push any runs across. Justice began a two-out rally in the fourth inning with a double to left-center and the Braves quickly loaded the bases, but weak-hitting Rafael Belliard flied out to end the rally.

Justice had been virtually invisible in the postseason, with no extra-base hits and just five RBIs entering Game Six. As he stepped up to the plate to lead off the sixth inning, Braves fans were ready to forgive him for his critical pregame statements if he could help deliver the city’s first World Series championship.

Facing a tough left-handed reliever in Jim Poole — who had played college baseball just a few miles north at Georgia Tech — Justice drove a 1-and-1 fastball deep into the right-field seats. The ballpark erupted in a pent-up display of emotion and fans showered love on their outspoken outfielder. On NBC’s television broadcast, Baseball Hall of Famer Joe Morgan quipped, “It’s okay to talk the talk if you can walk the walk.”8

“I have never felt that much pressure in any game I’ve played in my life,” Justice said. “Nor do I think I ever will again.”9

With a 1-0 lead, Glavine looked nearly invincible. He cruised through the seventh and eighth innings, allowing just three walks and the single to Peña on 109 pitches. But his shoulder stiffened up when the Braves’ offense spent a long time at the plate in the seventh (again failing to score after loading the bases). When manager Bobby Cox and pitching coach Leo Mazzone asked Glavine how he felt before the ninth inning, he told them he was tired and getting away with a lot of mistakes. Cox decided to bring in fireballing closer Mark Wohlers to finish the game.

“It says a lot for the relationship we have with Tommy, that he would be able to come to us in that spot and tell us the truth,” Cox said. “So many other pitchers would have said nothing. … Those who weren’t true to themselves in a situation like that, how would they be able to stomach it if they’d blown it?”10

After struggling to connect with Glavine’s changing speeds for eight innings, the Indians had little chance against Wohlers’ 100-mph fastballs. Wohlers had emerged as a reliable stopper out of the bullpen, which had long been the Braves’ biggest downfall in their disappointing postseason runs since 1991. He set down Kenny Lofton, Paul Sorrento, and Carlos Baerga in order in the ninth. When center fielder Marquis Grissom ran down Baerga’s fly ball and squeezed it in his glove for the final out, Atlanta could finally celebrate its long-awaited championship.

No one was happier than the left-handed pitcher who had been with the Braves since the beginning, through the last-place seasons of the 1980s, two heartbreaking World Series defeats, and the player strike that turned some hometown fans against him.

“It’s the best feeling in the world,” said Glavine, who was honored as the World Series MVP after throwing the first one-hitter in a World Series game since Boston’s Jim Lonborg in 1967.

“The first time we saw Glavine I wondered how this guy had won so many games. Now I know,” Baerga said.11

1 Jeff Blauser, like Glavine, made his debut with the Braves in 1987 but he did not play in the 1995 World Series due to a leg injury suffered in a collision with the Reds’ Hal Morris during the NLCS.

6 As an American League umpire, Brinkman’s only prior experience calling Glavine’s pitches was in the 1991 All-Star Game in Toronto.

9 Jayson Stark, “A Deciding Game That Lived Up to Its Predecessors,” Philadelphia Inquirer, October 29, 1995: C4.