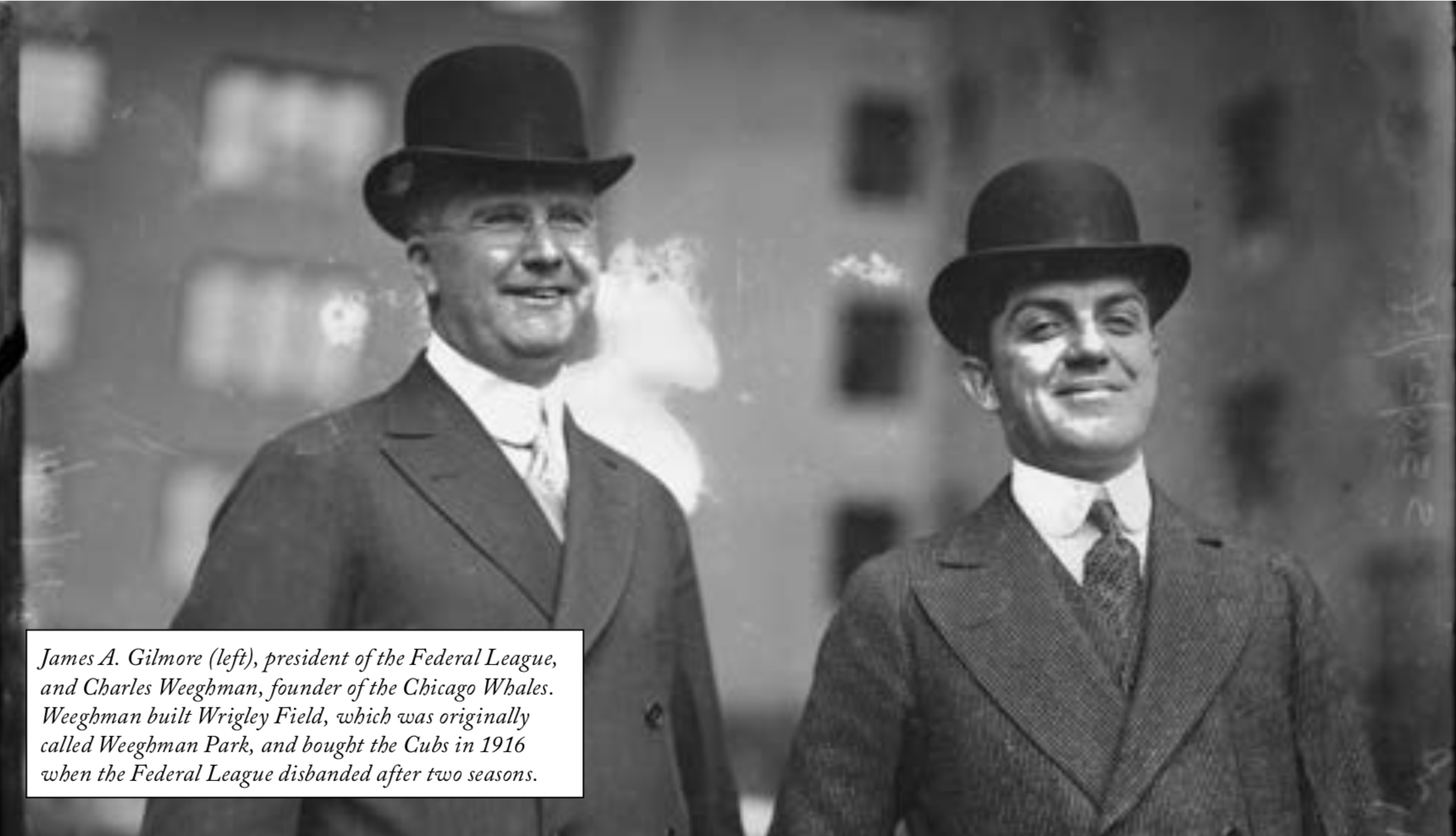 A Rebel without a glove of glue allowed the Chicago Whales to eke out the second and final title in the truncated two-year history of the Federal League. By rebuffing the Pittsburgh Rebels 3-0 in the second game of a doubleheader halted by darkness after 6½ innings on the last day of the season, the Whales won the crown by one one-thousandth of a percentage point.

The Whales and the Rebels closed the 1915 season by playing six games against each other in two cities in five days. The first four games would take place in Pittsburgh. When the series began, three teams remained in contention:

Chicago beat Pittsburgh 6-3 on September 29 to slip into second place. The Rebels rebounded to tip the Whales 8-4 and send Chicago back to third place on September 30. As a result of rain on October 1, the season would come down to a pair of doubleheaders, the first in Pittsburgh on October 2 and the second in Chicago on October 3.

With a sweep in Pittsburgh, the Whales went from third to first with one day to go. The events in Pittsburgh generated considerable excitement in Chicago: “Even before the report of the Whales’ double victory ticked over the wires … [Chicago] President Charles H. Weeghman sent out letters to … friends inviting them to be present at Whales park today to see Tinker’s boys win the pennant. Secretary Williams … was making preparations to handle the largest crowd in the history of the north side park.”1

The preparations proved necessary. In a “spectacular battle”2 in front of a sold-out crowd that filled the elevated trains, the streets, and even parts of the playing field, Chicago took the title thanks to a two-hitter by Bill Bailey, a Whale-come-lately, acquired from the Baltimore Terrapins on September 14. Having staggered to a 3-18 record for the 1910 St. Louis Browns, Bailey did little better for Baltimore five years later with a 6-19 record. But wearing the duds of the Whales, he surged to a 3-1 mark, with all three wins coming by shutout. A “fortunate addition to the Whale forces,”3 Bailey had three whitewashings in five games started for Chicago; over the rest of his career, he had just five shutouts in 112 games started.

Elmer Knetzer had received credit for the victory in the opener of the doubleheader thanks to three innings of one-hit relief. Knetzer improved to 18-14 as the Rebels rallied to sink the Whales 5-4 in 11 innings. Center fielder-manager Rebel Oakes, from whom Pittsburgh took its name, tapped the right-handed Knetzer to start the nightcap although a newspaper brief from the prior day had indicated that the southpaw Frank Allen would start instead.4 Going into the final game, Allen had a 2-2 record against Chicago in 1915, while Knetzer was 1-3 following his relief effort earlier in the day.

Through five innings, the teams combined to place just one man in scoring position. In the third, Chicago shortstop Mickey Doolin, also picked up by the Whales from the Terps in September, singled and stole second base but did not advance beyond that bag.

Doolin started the triumphant rally in the sixth with a second single. Eschewing a steal attempt this time, Doolin went to second on Bailey’s sacrifice. Leadoff man Rollie Zeider grounded out, pushing Doolin to third.

At this point in the contest, Knetzer had held Chicago scoreless for 8⅔ innings, yielding just four hits in the process. To end the inning, he had a big obstacle to overcome in Max Flack, the right fielder for the Whales who would finish the 1915 season with a .314 batting average, tied for the third-highest mark in the Federal League.

“Knetzer worked the count to two and two … then Max caught one on the nose and drove a terrific loft to right center,” the Chicago Tribune reported. “Oakes and [Cy] Rheam dashed madly after the ball and the Rebel did manage to get his hands on it, but the sphere hopped out and into the crowd for two bases, driving in … the one run necessary.”5

Dutch Zwilling followed Flack’s 20th double of the season with a two-bagger of his own. The hit drove in Flack and gave Zwilling his 94th RBI of the campaign, which would allow him to edge out Ed Konetchy of the Rebels (93) for the Federal League’s final RBI crown.

Art Wilson’s bloop scored Zwilling to push the Chicago lead to 3-0. Charlie Pechous followed with a single, meaning that the Whales had four consecutive hits off Knetzer after getting only four off him over his prior 8⅔ innings. Baseball is indeed a funny game.

Too late, Oakes opted to replace Knetzer with Allen, who retired Les Mann on a popout to Konetchy.

Bailey set down Pittsburgh in the seventh before play ceased. “Before the second game started, Umpire Bill Brennan asked the press box the exact minute of sundown” according to the Tribune. “It was 5:24, and apparently Brennan warned both clubs he would call the game at that precise moment, for all the athletes understood the battle was over after Pittsburgh’s seventh. The watches showed 5:25 when the last putout was made.”6

Had Oakes held on to the ball, the game likely could have ended in a scoreless tie. In that case, Pittsburgh would have won the crown with the final standings looking like this:

The Flack swat in the nick of time saved the Chicago nine as the Whales won the 1915 FL title7 by the slimmest of margins:

1 This quotation comes from an article in a box with neither author nor headline on the front page of the sports section of the Chicago Sunday Tribune, October 3, 1915. Tinker “enjoyed great success as player-manager of the Chicago Whales. Playing in their brand-new ballpark, Weeghman Field, the Whales finished a close second in 1914 and won the Federal League pennant the following year, outdrawing the Cubs in both seasons.” Lenny Jacobsen, “Joe Tinker,” sabr.org/bioproj/person/bc0df648 (emphasis added).

5 Alcock. Presumably the reference to the crowd was to spectators on the field rather than on the other side of the fence, which would have given Flack a homer rather than a ground-rule double. Perhaps the proximity of the large crowd affected Oakes’s ability to catch the ball. “Oakes took after the drive, tracking the ball in the dusk, and headed towards the roped-in standing crowd along the perimeter of the outfield. For a costly moment, just short of the standees, he took his eye off the ball’s flight, and it ‘struck his glove and bounded out.’” Phil Williams, “Rebel Oakes,” sabr.org/bioproj/person/37539897.

7 For a closer look at the 1915 Chicago Whales, see Mark S. Sternman, “The Last Best Day: When Chicago Had Three First-Place Teams,” available at sabr.org/research/last-best-day-when-chicago-had-three-first-place-teams.