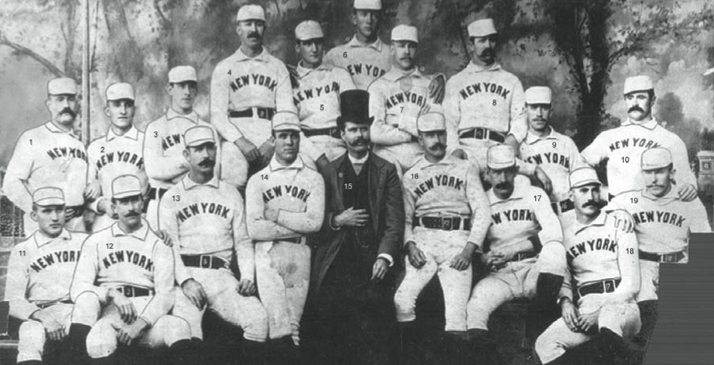 The 1889 New York Giants were loaded with talent and charisma, but they still needed to overcome formidable challenges off and on the diamond if they were to repeat as world champions. Prompted by private real-estate interests, city fathers in February evicted the team from the Polo Grounds, their home park at 110th Street and Fifth Avenue, so that 111th Street could be extended through the field. Giants owner John B. Day moved the team to swampy Oakdale Park in Jersey City for two games to begin the season and then to the St. George Grounds in Staten Island for an extended stay as he sought a new venue in Manhattan.1

The team was also wracked by internal divisions. Since the end of the 1888 season the press had been full of speculation that star shortstop John Montgomery Ward would seek to leave the Giants—Boston and Washington were often mentioned as destinations. Nor was Ward popular with some teammates. On the eve of the 1889 season, one player, speaking anonymously, described Ward as “a very jealous man,” who “could not bear to see the club win with Buck Ewing as captain. … I voice the sentiment of nearly all the players when I say that the Giants can play good ball and win the championship without the services of Ward.”2

Even more ominously, Giants players—led by Ward and pitcher Tim Keefe—formed the backbone of the Brotherhood of Professional Base Ball Players, which claimed the allegiance of a majority of National League players. The team owners’ decision in the offseason to impose the Brush Classification Plan, a salary cap that would take into account a player’s “habits, earnestness, and special qualities,” outraged Brotherhood members, who sought more bargaining power in contract negotiations.3

The ongoing labor tension almost overshadowed the thrilling final stages of the pennant race. The Giants fell a game behind the Beaneaters after losing to Pittsburgh on October 1. They regained the top spot the next day with a 6–3 win over the Alleghenies while Boston lost to Cleveland. Both teams won their next two games, leaving the New York at 82– 43 and Boston at 83–44. The pennant race would thus be decided on the last game of the season. To make sure that Boston did not resort to any “underhand work” to steal the pennant, New York manager Jim Mutrie left his team in Cleveland before its final contest and departed for Pittsburgh, where the Beaneaters and Alleghenies were playing, so he could monitor any shenanigans firsthand.4 (Before the crucial games of Saturday, October 5, Boston manager Jim Hart and star pitcher John Clarkson sent a telegram to Cleveland manager Tom Loftus offering the Spiders starting battery $500 and an equal sum to the rest of the team if Boston won the pennant.) Mutrie announced before his trip to Pittsburgh that Tim Keefe would start the deciding game for the Giants. Keefe, who had thrown a two-hitter against Cleveland on October 3, declared that he would pitch the best game of his life.5

New York’s contest against Cleveland, played before a crowd peppered with a surprisingly large number of Giants fans, was a “grand one.”6 Giant center fielder George Gore led off the first inning with a four-pitch walk and Mike Tiernan followed immediately with a home run. The Giants scored again in the fourth when Art Whitney’s sacrifice brought in big Roger Connor from third. Cleveland narrowed the score to 3–2 in the fifth inning, when Paul Radford doubled home Jay Faatz and Sy Sutcliffe, but New York responded with a run in the bottom of the inning and another in the sixth. Sutcliffe drove in the Spiders’ Bob Gilks with a sacrifice fly in the ninth inning, but a fly ball by Cleveland pitcher Henry Gruber to Gore ended the game with New York a 5–3 victor. Keefe was almost as good as his promise, striking out five and yielding only six hits.

In Pittsburgh, meanwhile, the Alleghenies took a 3–0 lead over a weary and wild John Clarkson in the first inning. The Boston Herald wrote that the Beaneaters appeared “anxious” and “overconfident” at the same time—in part, no doubt, because the progress of the Giants-Spiders game was posted on the left-field fence.7 When the Giants’ win was announced, many people in the stands felt the life go out of the Beaneaters, who managed but five hits and committed five errors in a 6–1 loss. New York was again champion. “There are [G]iants in our day,” lamented the Boston Gazette, “but they live in New-York, not in Boston”—and only after the closest race in the National League’s 14-year history.8

The Giants spent the evening in “jollification” at Cleveland’s Hollenden Hotel as congratulatory telegrams rolled in, including one from the Boston team. So large was the celebrating mob upon the club’s arrival in Jersey City the next day that team members had trouble boarding the ferryboat to take them across the Hudson River. When the craft reached Manhattan, the Giants were met by another enthusiastic crowd, which cheered them at every street corner until the players disappeared into their homes.9

Within weeks, the mood had soured: Ward’s Brotherhood issued a manifesto declaring that “players have been bought, sold, and exchanged as though they were sheep instead of American citizens.” Within months the new Players League began play. Although it lasted only one season, the league ripped away the core of the Giants and pushed John Day toward financial ruin. New York would not be National League champion again for 15 years. 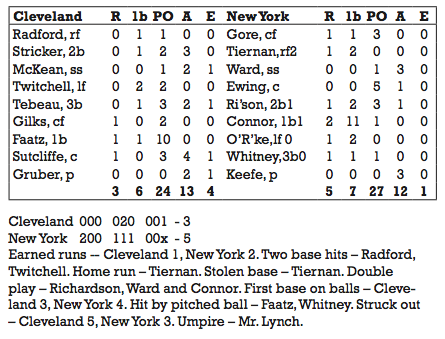