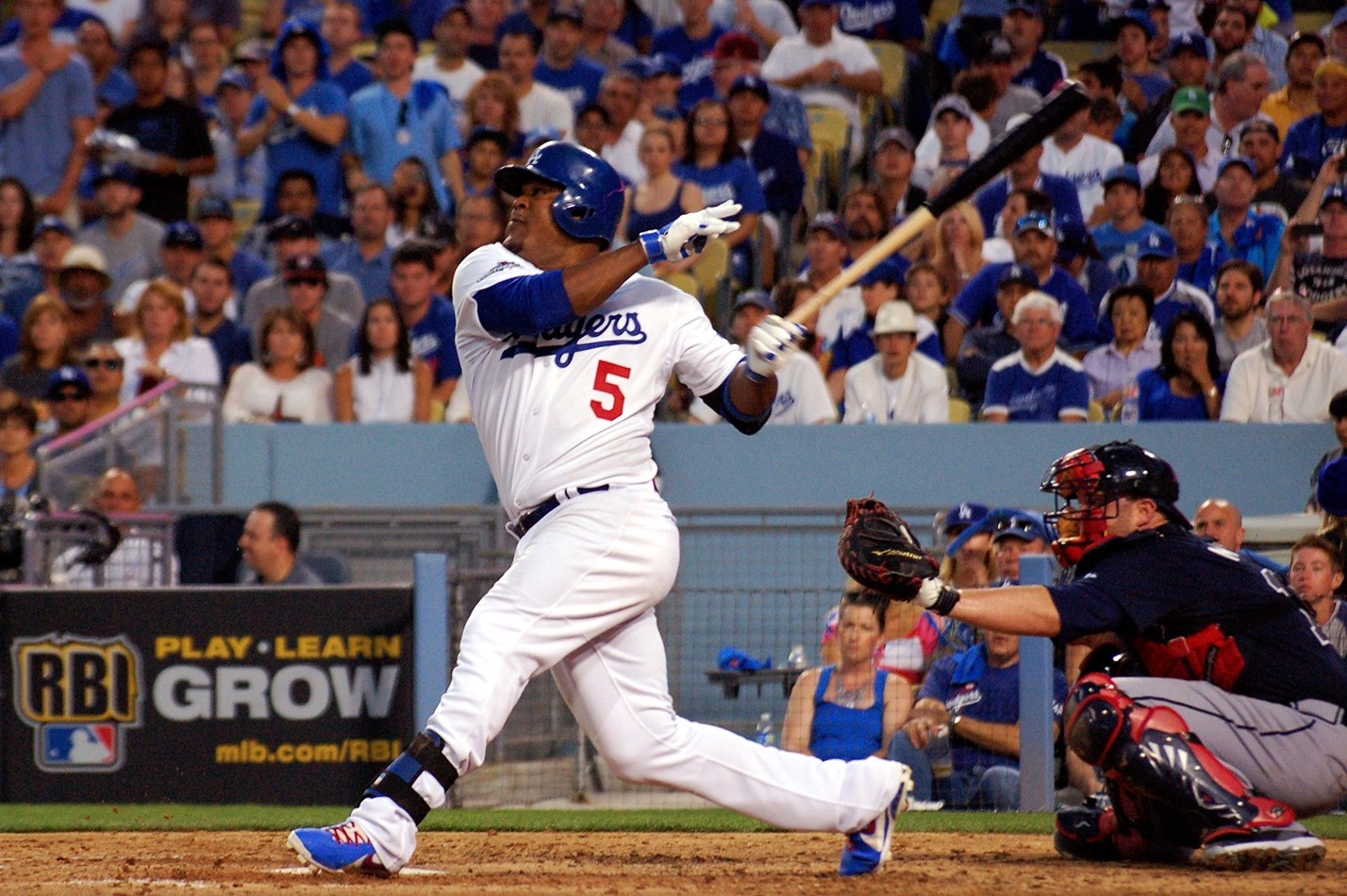 On a clear, 71-degree October night in the hills above downtown Los Angeles, the Atlanta Braves, one loss from postseason elimination but also one win from forcing a winner-take-all game on their home field, lined up to face the Los Angeles Dodgers in Game Four of the 2013 National League Division Series.

The Dodgers’ manager, Don Mattingly, on thin ice in the third and final year of his contract, had only two options: Clayton Kershaw, bound for his second career Cy Young Award and coming off a 12-strikeout masterpiece in Game One of the series, or journeyman Ricky Nolasco.1 With 54,438 at Dodger Stadium eagerly waiting in anticipation of the first pitch at 6:38 P.M., Kershaw jogged out to the mound. In his sixth major-league season, it was the 25-year-old left-hander’s first career start on three days’ rest.

But the Braves would be no easy foe for Kershaw: They had led the NL in home runs and were second in wins (96, to the Dodgers’ 92). Each team had won its respective division. In this series the Dodgers had seized a two-games-to-one lead, winning 13-6 a day earlier to push Atlanta to the brink of elimination.

On the opposing side, 37-year-old Freddy Garcia, a back-to-back All-Star more than 10 years earlier, was entrusted with the ball. Garcia, with a high-80s fastball, a sharp slider, and a deceiving splitter, planned to take down the Dodgers by filling up the zone and forcing soft contact.2

The game did not start off well for Garcia, who allowed Carl Crawford a leadoff home run on a hanging breaking ball — giving the 32-year-old left fielder home runs in back-to-back games. Garcia ran into more trouble later in the inning, surrendering a single and stolen base to Hanley Ramirez before getting dynamic rookie Yasiel Puig to fly out to the warning track to end the inning.

In the bottom of the third, Crawford hit another solo shot, just inside the right-field foul pole, to put the Dodgers ahead 2-0.

Meanwhile, Kershaw was breezing through the Braves’ hitters, touching 95 mph, with only one scare — when Garcia launched a ball that was caught five feet short of the left-field wall. But the Braves capitalized on the Dodgers’ poor defense in the fourth to tie the game: a single by Freddie Freeman followed by a crucial throwing error by first baseman Adrian González, a wild pitch, a single, and a fielder’s choice. Both runs were unearned.

A Dodgers rally in the bottom of the sixth was quelled quickly by a 5-4-3 double play, punctuated by Freeman’s incredible scoop at first to get Puig by a half-step. At the end of the sixth, Kershaw, his pitch count at 91, was removed from the game with the score still tied, 2-2.

Once Kershaw exited, Atlanta’s offense attacked reliever Ronald Belisario in the top of the seventh. Second baseman Elliot Johnson roped a ball down the right-field line, where Puig misplayed it, resulting in a standup triple, Johnson’s first hit of the series. A pinch-hit single by José Constanza, batting for Garcia, put the Braves in the lead for the first time all night.3

As the game headed to the bottom of the eighth, the Braves, with right-hander David Carpenter, their third pitcher of the night, on the mound, were six outs from moving the series back home to Turner Field for Game Five. After stranding men in scoring position in the sixth and seventh innings, however, the Dodgers started the eighth with a leadoff double by Puig.

Juan Uribe, at age 34 in his third season as a utility infielder in Los Angeles, with World Series rings from the 2005 Chicago White Sox and 2010 San Francisco Giants, stepped up to bat. Mattingly called for a bunt, intending to advance Puig to third for a better chance at scoring the tying run.

But Dodgers fans, looking for Uribe to knot the game himself after a double in his previous at-bat, roared their disapproval, hurling insults in Mattingly’s direction.

On the first pitch, Uribe squared up … and his bunt rolled foul. The crowd booed Mattingly: “Let him hit!”

On the second pitch, Uribe squared around again, and the fans groaned in disbelief at another foul bunt.

With two strikes, Uribe had no choice but to swing away.

After taking two balls, he did just that on the fifth pitch, raising both hands to the sky as he finished the swing, dropping the bat and watching the ball soar farther and farther until it landed in the Dodgers bullpen, just over the outfield wall in left. The Dodgers now led, 4-3.

TV cameras panned to Craig Kimbrel standing in Atlanta’s bullpen — with his 1.21 ERA and league-leading 50 saves — hands on his hips, still waiting to be called in … too late.4

The fans, who had been relatively quiet since the third inning, exploded into ecstasy and excitement. They continued to roar as Uribe rounded the bases, celebrated with his teammates pouring out of the dugout, and came out for a curtain call.

In the top of the ninth, 26-year-old closer Kenley Jansen wasted no time in finishing the Braves’ offense, striking out all three hitters he faced. His second strikeout was aided by a favorable call from the home-plate umpire on a pitch outside the strike zone to Jason Heyward, and then Jansen finished Justin Upton off with a high cutter, his signature pitch, sending the Dodgers to the National League Championship Series. Ultimately, the Dodgers fell to the St. Louis Cardinals in six games, due to poor performances by Kershaw and Jansen, along with below-average hitting.

But for the second time in his career, Uribe’s home run had made the difference in the final game of a postseason series. His eighth-inning homer off Ryan Madson of the Philadelphia Phillies in Game Six of the 2010 NLCS had put the Giants in the World Series.

When asked about his heroic 2013 feat in a postgame interview, Uribe said, “You know, when they gave me the bunt sign … I’m thinking … I need to do my job: try to move the runner. [But] they gave me a hanging breaking ball. … [I saw] the ball, and hit it.”5

So how did the two stars of the game, Juan Uribe and Carl Crawford, end their careers? Uribe had an under-the-radar season in 2014, the year after his famous homer, collecting a 4.0 Wins Above Replacement, as determined by Baseball-Reference.com (bWAR), in only 103 games. Sadly, this was his last good season, as in the remaining two years of his career his bWAR never surpassed 1.0; in 2015 he played for three teams before ending his career in 2016, playing in only 73 games prior to his release. Still, he solidified his place in Dodgers lore with the home run.

Crawford’s career ended similarly to Uribe’s. Crawford, who had been traded to the Dodgers from the Boston Red Sox in a nine-player deal in August 2012, less than two years after signing a seven-year, $142 million contract with Boston, had an above-average season in 2014, but he was both unhealthy and inconsistent in 2015 and 2016, leading to his release with $35 million left on his contract.

As for the Braves, the 23-year-old Freeman turned into one of the most consistent hitters in the league. The Braves’ third-base coach in 2013, Brian Snitker, became the manager in 2016, replacing Fredi González, who had managed Atlanta since 2011.

The Braves-Dodgers rivalry remained heated, as the former NL West divisional foes faced off in a seven-game Championship Series in 2020, which the Dodgers won en route to their first World Series title since 1988, with Kershaw and Jansen the only players remaining in Los Angeles from the 2013 team.

The Braves extracted their vengeance in 2021 — managed by Snitker and with Freeman their only on-field link to 2013 — beating the Dodgers in six games in the NLCS en route to winning the World Series and breaking a 26-year title drought of their own.

This game was the first postseason game I ever attended. I was 8 years old and will always remember jumping up and down with my father after the two-run blast.

The author accessed Baseball Reference and Retrosheet for general game information and play-by-play data. The author also watched the full game on YouTube.

2 Garcia’s 1.9 walks per nine innings (BB/9) in 2013 were far below the league average 3.02. By the end of his career, Garcia was purely a contact pitcher; his opponent’s contact percentage, and his first-pitch strike percentage, were greatly above average, according to Fangraphs.com.

3 At this point, the Braves had a Win Expectancy of 72 percent, according to Baseball-Reference.com, meaning that teams leading under similar circumstances (score, inning, etc.) win 72 percent of the time.

4 Consistent with standard bullpen roles and use in 2013, the Braves used Kimbrel in only one game during the eighth inning in the regular season that year. In all other regular-season appearances, he entered in the ninth inning or during extra innings. Three days earlier, however, in Game Two of the NLDS on October 4, Braves manager Fredi González called on Kimbrel, with a one-run lead, to retire Uribe for the third out of the eighth inning. Kimbrel closed out the game in the ninth to complete the four-out save.