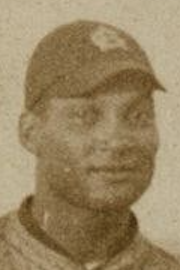 In the 1926 Negro World Series, pitcher Claude “Red” Grier threw a no-hitter for the Atlantic City Bacharach Giants, setting a Negro League milestone that one would have thought would last for a long time. But almost exactly a year later, another Bacharach, Luther “Red” Farrell, again hurling for the team in a World Series, did the no-hit trick again.

The Bacharachs had won the Eastern Colored League pennant for the second straight season, and their Negro National League opponents again were the Chicago American Giants. Farrell’s gem was not as lustrous as most no-hitters: He allowed two unearned runs, walked five, and made one of four AC errors himself. Darkness that presaged a torrential rainstorm stopped the game after the top of the seventh. But as the raindrops fell, the scoreboard showed three runs for the home Bacharachs, two for the American Giants, and no Chicago hits.

Farrell, who stood over 6 feet and weighed a solid 200 pounds,1 was a two-way player, often appearing in the outfield when not pitching. In fact, over his 13-year Negro League career he was a better hitter than pitcher, with a .299 batting average and .826 OPS (on base plus slugging percentage) against a 52-63 won-lost pitching record and a 4.72 ERA. But in 1927 circumstances made him more valuable to the Bacharachs as a lefty pitcher than as a left-handed slugger, although he still played some outfield and hit .325 with six home runs. Red Grier, who had been a mainstay of the 1926 starting staff, was quickly on his way to the end of his career due to arm trouble, and Chauncey “Rats” Henderson, usually the staff ace, suffered a sore arm in the second half of the season.2 Farrell became a regular starter and led the team with 16 wins, with a 3.41 ERA.

Farrell’s no-hitter not only made history, but it kept the Bacharachs from being swept in the Series. The best-of-nine matchup had opened in Chicago on October 1, and the Americans won four straight at home, usually by runaway margins. They scored 33 runs against only 4 for Atlantic City. The Bacharachs, with Henderson unavailable, at first depended on a two-man starting staff of Farrell and Jesse “Mountain” Hubbard, who split the four losses. Farrell was beaten by Chicago ace Bill Foster, 6-2, in the first game, and threw another complete game in the fourth contest on October 4, although again he was far from impressive, giving up nine runs (four earned) and 11 hits.

Travel from Chicago to Atlantic City, plus inclement weather that dogged the rest of the series, put the fifth game off until October 8. This allowed Bacharachs manager Dick Lundy to use Farrell in what were technically back-to-back starts, although four days apart.

The extra rest was just what Red needed. He was again matched up against Foster, who pitched a fine game himself. Bill gave up only five hits in six innings, with one of his three runs unearned.

The Bacharachs scored all three of their runs in the second inning. First baseman Milt Lewis, one of only two Atlantic City players to hit over .300 in the Series, led off the inning with a single. Lundy’s groundout moved him to second, and right fielder Clarence “Scally” Smith doubled him home. Catcher Willie Jones, whose .400 average led the Bacharachs in the Series, singled in Smith and took second on the throw home. The third, and eventual winning, run scored when Farrell grounded to second baseman Charlie Williams. Williams flipped the ball to shortstop Pythias Russ, forcing Bacharachs second baseman E.C. “Pop” Turner, who had walked, but Russ’s throw to seal a double play went high over the first sacker’s head, allowing Jones to score.

Now all Red had to do was hold Chicago, but things soon got dicey. The Americans scored their first run in the fourth when right fielder Walter “Steel Arm” Davis reached first on third baseman Oliver Marcelle’s error, stole both second and third, and scored when catcher Jones fired his throw to third into left field. The American Giants scored their second run in the fifth. Catcher Larry Brown walked, and a sacrifice and groundout moved him to third. First baseman Jim Brown hit what ought to have been a harmless third-out roller to Turner at second, but he threw it away and Larry Brown scored.

With a margin now of only one run, Farrell stopped walking people and his teammates stopped making wild throws. Chicago went out, three up and three down, in both the sixth and seventh innings, at which point the umpires called the game for darkness. The American Giants were incensed, and “stormed and fumed wanting to continue to play,” but the umps’ decision was proven correct when “less than three minutes afterwards the rain came down in torrents.”3

The rain made it impossible to play the next day, but the Series resumed on October 10. Other than showcasing a fine performance by Bacharach starter Hubert Lockhart, who pitched a complete game, nothing was accomplished. Darkness ended the game after 10 innings in a 1-1 tie. Farrell returned to the mound the next day with two days of rest. Going against Chicago starter George Harney, he shut the American Giants down on seven hits and the Bacharachs won, 8-1, to stay alive. Atlantic City won the eighth game, 6-5, to cut Chicago’s Series lead to one. But the Bacharachs had run out of luck. Lockhart started the next day, but he was knocked out in the second inning. A new hurler was needed, and Lundy ran out none other than Farrell again. Red pitched 6⅔ innings, almost as many as in his no-hitter, but he was decidedly less successful, and Chicago won, 11-4, to take the Series.

The early effects of the Great Depression were already affecting Negro League baseball. The Eastern Colored League collapsed partway through the 1928 season, although most of the teams played on as independents and then came back together in 1929 as the American Negro League. But the ANL also went out of business at the end of that season, as did the Bacharach Giants.

Farrell, likely sensing the forthcoming collapse and its effect on his own financial welfare, left the team in mid-1929 to join the Atlantic City Police Department. It wasn’t that he had decided on a second career in law enforcement – the department had one of the best semipro baseball teams in Southern New Jersey and needed a crack pitcher.4 Red returned to Negro League ball, though, with the Lincoln Giants from New York, the New York Black Yankees, and a reincarnation of the Bacharach Giants based in Philadelphia, before leaving the big-league scene in 1934. He remained in Atlantic City, at least seasonally, but also lived in Miami in the winter, a likely pattern for someone in the hospitality business, which was his post-baseball and post-police line of work.5 He died in Miami in 1956.

Negro League player statistics were not always reliably and completely compiled in the years the games were actually played. But efforts have been made in recent years to use box scores and game stories to retroactively compile annual stats. The statistics cited here are from the Seamheads.com Negro Leagues Database, as of June 2021. The Database is considered the most complete of the efforts to re-create Negro League statistics, but it is an ongoing project, and the numbers cited here may change in the future.