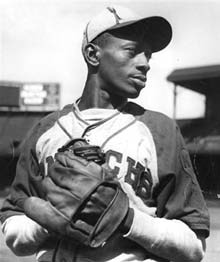 This article was written by Dirk Lammers

“Just take the ball and throw it where you want to. Throw strikes. Home plate don’t move.” — Satchel Paige

Three decades before Don Larsen threw his perfect game in the ’56 World Series, a 22-year-old Negro League pitcher “down the Shore” beat his big-city counterpart to the postseason punch.

Claude “Red” Grier joined the Atlantic City Bacharach Giants midway through the 1925 season after spending a year and a half with the Washington (and later Wilmington) Potomacs. Grier boasted “a wide assortment of pitches and good control,” James Overmyer wrote in Black Ball and the Boardwalk, and the southpaw helped lead the 1926 Bacharach Giants to an Eastern Colored League championship.1

Atlantic City was set to face the Negro National League champion Chicago American Giants in the third-ever Colored World Series, with three of the games staged at neutral sites.

Game One ended in a tie, and Grier took the loss in Game Two.

On October 3, 1926, Grier got the start for Game Three at Maryland Baseball Park in Baltimore and dominated the American Giants lineup for a 10-0 no-hit victory in front of just 2,857 fans.

Grier’s gem is one of the dozens of no-nos thrown in the Negro Leagues before the majors integrated in 1947, though incomplete game accounts and the gray lines between professional, semipro, minor league, and barnstorming teams make it tough to come up with an exact number.

There’s no doubt that many Negro League pitchers could have etched their spots into the major-league record books if baseball had welcomed them earlier, but their numerous accomplishments received far less media attention.

“Cannonball” Dick Redding, who played for a variety of teams from 1911 through 1928, has been cited as throwing as many as 30 career no-hitters—seven in 1912 alone—but it’s difficult to uncover enough box scores to prove or disprove those estimates.

Redding’s August 28, 1912, no-no for the Lincoln Giants against the Cuban Stars in Atlantic City is considered the first documented no-hitter between two high-level African American teams.

“Redding’s speed was terrific, and the Cubans were helpless before his delivery,” noted a New York Press game account uncovered by researcher Gary Ashwill. “This was the second hitless game Redding has pitched this season.”2

The other 1912 no-no, according to the Press, was an August 5 perfect game against the Cherokee Indians during that club’s East Coast barnstorming tour. If there are others (and there most certainly are), they’re difficult to dig up.

Another Negro League pitcher of note is the Kansas City Monarchs’ Hilton Smith, who threw the Negro American League’s first no-hitter on May 16, 1937. Smith led the Monarchs to a 4-0 win over the Chicago American Giants. 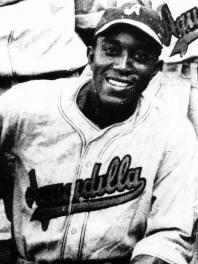 Fans across the nation gushed over Bob Feller in 1940 when the Iowa farm sensation pitched the majors’ first Opening Day no-hitter, but detailed game accounts are scarce on Leon Day’s 1946 Opening Day no-no for the Newark Eagles of the Negro National League.

Like Feller prior to his second no-no, the quiet, soft-spoken Day had just returned from serving his country in World War II, having stormed Utah Beach during the Allied Forces’ invasion of France. In James A. Riley’s book Of Monarchs and Black Barons: Essays on Baseball’s Negro Leagues, Day said he had few opportunities to pitch while stationed overseas.

“I was discharged in February at Fort Dix, and went home to Newark until spring training,” Day recalled. “We trained in Tampa that year, but my arm wasn’t too good.”3

Day, as usual, was way too modest. The right-hander took the mound at Newark’s Ruppert Stadium on May 5, 1946, and used his illusory no-wind-up delivery to no-hit the Philadelphia Stars for a 2-0 win. He allowed just three runners to reach first via a pair of walks and an error, but he struck out just six batters. For Day, any game with a “K” count below 10 was a sign that he “didn’t have good stuff.”4

In stark contrast to Leon Day’s modesty was the larger-than-life Satchel Paige, who estimated he threw 55 no-hitters over his long, storied career that included stints with numerous teams. When Paige wasn’t pitching in league games, he was barnstorming across the country competing against anyone who would take the ball field against his All-Stars. Just two Paige no-hitters are documented. On July 15, 1932, he threw the first no-no at the newly built Greenlee Field in Pittsburgh’s Hill District, the nation’s first black-built and black-owned major-league ballpark. His Pittsburgh Crawfords topped the New York Black Yankees 6-0.

“The elongated speed ball artist from the far South was at his best and literally had the Yanks eating out of his hand,” said a Pittsburgh Courier account.5

Paige’s second no-no for the Crawfords came against the Homestead Grays. On July 4, 1934, Paige struck out a Negro National League–record 17 batters.

It would be 14 years before he finally got the opportunity to face big-league batters in the regular season. In 1948, at the age of 42, he made his major-league debut with the Cleveland Indians.

The list of Negro Leagues no-hitters, as best as anyone has been able to verify, includes other such greats thrown by Bill Gatewood, “Smokey” Joe Williams, and Jesse “Nip” Winters.

DIRK LAMMERS is an award-winning Associated Press journalist and baseball blogger. He is an oft-quoted authority on no-hitters and the creator of NoNoHitters.com, the acclaimed gathering point for all things related to pitching’s greatest feat. His book “Baseball’s No-Hit Wonders” was published by Unbridled Books in 2016.

The following is a list of 34 Negro Leagues no-hitters, but ongoing research may turn up more. Former Negro League pitchers such as “Toothpick” Sam Jones who threw their no-nos in the majors appear on the official Major League Baseball list.