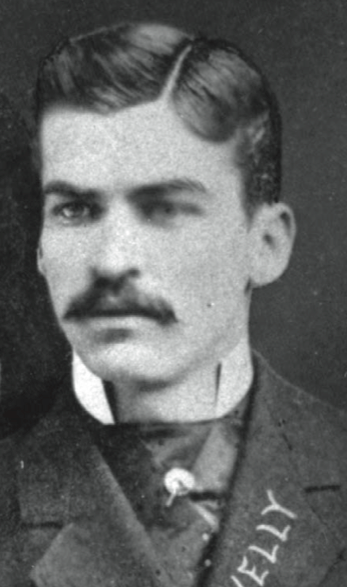 In his year-end assessment of baseball in 1882, Henry Chadwick asserted that “baserunning gave the Chicago team the League championship in 1880, ’81, and ’82.”1 This was never more evident than in Chicago’s 6–5 victory over Providence in a crucial game played on September 13, 1882.

Chadwick emphasized base stealing in his article but also extolled taking chances in other circumstances. The pivotal play in the game came when Michael “King” Kelly made contact with George Wright at second base, causing a two-run, three-base throwing error. Basepath collisions were rare at that time, and “breaking up the double play” as we know it today was unheard of. Kelly’s move created much discussion in later weeks, but it became the norm within the next few years.

The game was the middle one in a clutch threegame sweep of the league-leading Grays by the defending champion White Stockings, part of a 15–1 finish that took Chicago from four wins behind the Grays to three ahead at the end. Chicago’s hot streak coincided with a lineup switch reinstating Joe Quest to replace right fielder Hugh Nicol in the ninth spot in the batting order. The young Nicol was a daring baserunner in the White Stocking mold, but could not keep his batting average over .200. Quest, while not much of an offensive threat either, was a fine second baseman, and the move allowed Captain Cap Anson to shift Tommy Burns back to shortstop from second. That steadied the infield defense for the pennant run. After all, Chadwick had begun his assessment by saying, “There is no questioning the fact that base-running, next to fielding, has come to be the most important element of success in baseball, it being far more important than batting as batting is carried on nowadays.”2 (Italics added.)

Providence manager Harry Wright had strengthened his team’s fielding in mid-June by adding his brother, veteran George Wright, to the roster. The old star had played very little since being the target of the first reserve clause following his pennantwinning stint as Providence’s captain and manager in 1879. The layoff had not diminished his fielding skills, though he batted a woeful .162 in his reprise performance. Relying on the formidable pitching tandem of Johnny Ward and Charlie Radbourn, Harry Wright’s team had pulled ahead of Anson’s at the end of July and led all through August.

When the Grays arrived in Chicago for their final showdown, they had a 47–26 record with just 11 games to play, while the second-place Whites were 43–28 with 13 games to go. The series opener was a good-fielding, tightly played game (only three fielding errors and one base on balls), won by Chicago, 6–4.

The second game was a wilder affair, featuring dashing baserunning from the start. Chicago lost the toss and batted first, George Gore scoring a run after a single, a steal of second base, an infield out, and a clean hit by Captain Anson. Providence turned the score around with two runs in the second, thanks to heady work on the bases. With men on first and third, Jerry Denny broke for second, and Radbourn stole home just ahead of the return throw from second base. Then, while catcher Silver Flint argued the call on Radbourn, Denny streaked over to third, then trotted home on a single by George Wright. Providence counted another pair in the fifth after a passed ball allowed Jack Farrell and Ward to move into position to score on a single by Tommy York. A passed ball and a wild pickoff throw helped Ned Williamson and Kelly to score in the Chicago sixth. 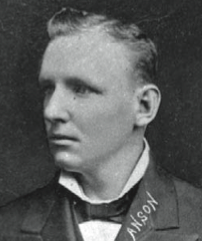 So the score stood 4–3 in favor of Providence at the start of the eighth inning. An error, a force out, and a single by Kelly put runners on first and second when Burns grounded sharply to Wright at shortstop. The veteran fielded it cleanly and stepped on second base to force Kelly, but as he continued his motion to throw to first for a double play, Kelly ran almost straight at him. Kelly veered off at the last instant but did make enough contact to cause the throw to soar into the stands. Before it could be retrieved, two men had scored, including the batter Burns, who circled the bases on the error. George Wright looked indignant, but the umpire, William Hawes, was looking at first base and saw no interference.

Quest tripled and scored in the top of the ninth. And Sandy Nava scored in the bottom of the inning on a walk, a passed ball, and error. But with one on and two out, Wright fouled out to make the final score 6-5, Chicago.

Kelly’s collision with George Wright was not mentioned in the next day’s newspapers, but a few days later Harry Wright wrote a letter to the Providence Journal complaining about Kelly’s tactics in general and this instance in particular, which Harry viewed as intentional interference. The letter was given wide circulation on the nation’s sports pages, setting off a minor brouhaha. Kelly justified his actions by saying that while he would never intentionally injure another player, “I play to win and if I have to employ a few subterfuges to win I cannot help it.”3

Chicago also won the series finale, 6–2, with Fred Goldsmith pitching a seven-hitter and batting home three runs. The sweep left the White Stockings one win behind in the standings, and they went on to win nine of their final ten to fly past Providence and finish three games ahead in the final standings. 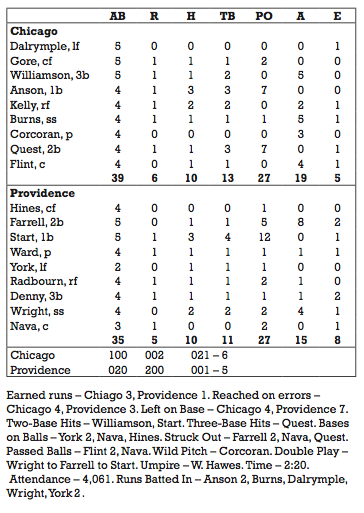 Perrin, William D. “Days of Greatness,” a 1984 SABR reprint of articles originally appearing in the Providence Journal in 1928.