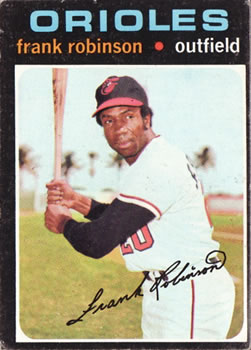 The year 1971 was a good time to be a sports fan in Baltimore. The Baltimore Colts had won Super Bowl V earlier in the year, defeating Dallas 16-13. It was the Colts’ third NFL championship. Earlier in the spring, the Baltimore Bullets made it to the NBA finals before getting swept by Milwaukee.

And then there were the Baltimore Orioles. The O’s were on cruise control as the 1971 baseball season neared completion. The two-time pennant winners were looking for the three-peat and a third flag to join the two that fluttered in the wind above Memorial Stadium. And what the heck, why not add another world championship banner to go with the ones from 1966 and 1970?

But first things first, which meant wrapping up the American League East. On Monday, September 13, Baltimore (88-51) was hosting second-place Detroit (81-64) for a twilight-night doubleheader that opened a three-game series. For the Tigers to put a dent in the Orioles’ 10-game lead, a sweep of the O’s was an absolute must. Anything less and, well, it was back to the drawing board next spring in Lakeland, Florida.

And just like that, the Orioles proved to be the rudest of hosts, stomping on the Tigers 9-1 in the opener. Dave McNally had little trouble pitching a complete-game win to raise his record to 19-4. The Baltimore offense exploded as Frank Robinson smacked a three-run home run in the first inning. It was his 24th homer of the season and the 499th of his marvelous career.

Brooks Robinson added a solo shot and Davey Johnson drove in three runs to help lead the offense. The Orioles’ lead ballooned to 11 games. Many in the minuscule crowd of 13,292 who turned out for the doubleheader headed for the exits after the opener. After all, it was a school night and the fans were confident that there would be October baseball.

Frank Robinson was one round-tripper away from becoming only the 11th player to reach the 500-homer milestone. Robinson was already one of the most accomplished players in baseball history. Thus far he had won the Rookie of the Year Award (1956) and a Gold Glove (1958), and was the only player to win the Most Valuable Player Award in both the National League (1961) and the American League (1966). He was named MVP of the World Series (1966) when Baltimore won its first Series title.

Earlier in 1971, Robinson had smacked a two-run home run in the All-Star Game and was named the game’s MVP. Reggie Jackson gets the most notoriety in that game for the tremendous clout he hit off Dock Ellis that hit the light tower above Tiger Stadium. But it was Robby who walked away with the hardware.

Seemingly, Frank Robinson was headed to Cooperstown one day when his career ended. Smashing 500 home runs would cement his enshrinement. And the sooner to get the drama over, the better.

The nightcap of the doubleheader featured a pitching matchup of Joe Niekro (6-7 4.50 ERA) for Detroit and Pat Dobson (17-7, 2.93 ERA) for the Orioles. Right-hander Niekro was in his second year with the Tigers and was used mostly as a spot starter by Detroit manager Billy Martin. Righty Dobson, on the other hand, was an established starter for Baltimore and had won 12 straight games from June 17 to July 31.

But it was the Tigers who scored first, jumping on Dobson for three runs in the first inning. A two-run home run by Gates Brown was followed by a double to right field off the bat of Norm Cash. The Detroit first baseman scored on a single by Bill Freehan.

In the bottom of the first inning, the Orioles loaded the bases with one down. Martin had to go to his bullpen earlier than he anticipated when Niekro was removed because of a muscle strain in his rib cage under his right arm. Niekro did not pitch for the rest of the season.

Martin brought in lefty reliever Fred Scherman, who shut the door on the Orioles rally.

Maybe the Tigers sensed that their season was slipping away and decided to do something about it. In the third inning they equaled their three-run total from the first inning with three more. With one away, Cash and Freehan connected for back-to-back singles to right field. After Jim Northrup struck out, Mickey Stanley shot a grounder toward second base and through the legs of Davey Johnson to score Cash. Ed Brinkman singled to left to plate Freehan.

Baltimore skipper Earl Weaver summoned left-hander Grant Jackson to the mound and sent Dobson to an early shower. Scherman greeted Jackson with a single to right field, scoring Stanley, and the visitors were in front with a comfortable lead of 6-0.

The Orioles put a run on the scoreboard in the bottom of the third inning. Don Buford and Merv Rettenmund both doubled (Buford made it only to third), and a groundout by Boog Powell gave the Orioles their initial run. But RBI singles by Brinkman and Dick McAuliffe in the top of the fifth inning increased the Tigers’ advantage to 8-1. Many of the remaining fans at Memorial Stadium headed for the exits.

Detroit scored two more runs in the top of the eighth, making it 10-1. In the bottom of the frame, Frank Robinson led off the inning and flied out to center field. It looked as if history would have to wait another day. Brooks Robinson stroked a two-out double to right field and scored on a single to right by Johnson.

With one down in the bottom of the ninth inning, Curt Motton doubled to left. After Rettenmund flied out, Powell stepped in and singled home Motton for the Orioles’ third run. Up to the plate stepped Frank Robinson. He swatted the first pitch offered by Scherman and the ball landed just over the left-field wall, 375 feet from home plate. It was Robinson’s 500th home run and the hardy souls who remained cheered him as he rounded the bases. The clock showed the time in neon lights: 11:50 P.M. The Baltimore Sun reported that the historic baseball was caught by Leo Resop, a senior at St. Mary’s Seminary College.1

“It was a fastball, down and in,” said Robinson. “I jammed myself, didn’t hit it with the good part of my bat.”2 It was the fourth consecutive game in which Robinson had hit a home run.

“My first reaction on hitting the ball?” said Robinson in reply to a sportswriter’s question. “It was, ‘Do I have enough of it?’ I felt that I had the right direction and that it was just a question as to whether it was hard enough. It was the toughest homer of my career.”3

Baltimore swept Oakland in the ALCS in three games. But they lost the World Series in seven games to the Pittsburgh Pirates.