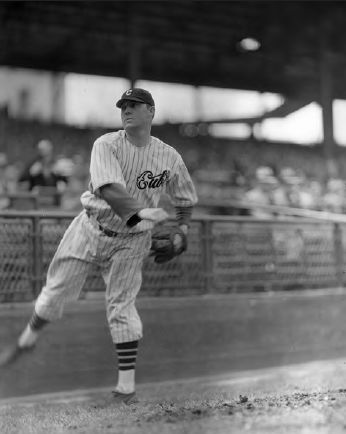 When the Brooklyn Robins and the Chicago Cubs squared off for the first contest of a four-game series at Wrigley Field on Saturday, September 14, 1929, there was little suspense about the NL pennant race. With a record of 91-45, the Cubs enjoyed a 13½-game lead over the Pittsburgh Pirates. Manager Joe McCarthy’s squad had won nine of their last 13 games; however, they looked vulnerable losing their last two games to the sub-.500 Philadelphia Phillies. The Robins, guided since 1914 by their namesake, skipper Wilbert Robinson, were in fifth place (63-74), 28½ games off the Cubs’ pace.

On the mound for Brooklyn was 27-year-old left-hander Watty Clark, en route to a breakout season, leading the majors in starts (39), and the league in innings pitched (279), but also in losses (19). Winner of 16 games in 1929, Clark emerged as the staff’s ace, a designation long held by Dazzy Vance. “I’ll pitch a curve roughly half the time,” said Clark. “Even when my arm is sore I’d rather pitch a curve than a fastball.1 Over a four-year stretch (1929-1932), Clark averaged 16 wins and 246 innings per year, making him one of the top southpaws in the NL. Hard-throwing right-handed fastballer Pat Malone got the call for the North Siders. In his second season, the 26-year-old Pennsylvanian had already established himself as one of the most feared and best hurlers in the game. He had struck out 10 and 11 batters respectively in his last two outings, both complete-game victories, to reach the 20-win benchmark for the first of two consecutive seasons. The workhorse on the Cubs staff from 1928 to 1932, Malone averaged 18 wins and 251 innings during that span.

An estimated 20,000 spectators turned out on a sunny afternoon for the Cubs’ eighth game on a 17-game homestand.2 A “genuine autumnal bite to the breeze” blowing off Lake Michigan portended a low-scoring game.3

Lacking his overpowering fastball, Malone relied on guile and some good defense to keep the Robins scoreless in the first three frames. Brooklyn’s Eddie Moore led off the game with a single to left field in front of a diving Riggs Stephenson, and moved to second on Johnny Frederick’s walk. But Chicago turned the first of three double plays to thwart a possible Brooklyn score. Malone began the second by issuing his second and final walk, to Del Bissonette. Wally Gilbert hit a screeching liner back to Malone, who knocked the ball down. Second baseman Rogers Hornsby picked it up and started another twin killing. Brooklyn had another scoring chance in the third inning when Frederick tripled with two outs. Malone reared back and whiffed hot-hitting Babe Herman, who had entered the game batting .388.

Unlike Malone, Clark breezed through the first three innings, allowing only a second-inning single to Hack Wilson, who was erased on Brooklyn’s first of three twin killings. Things changed in the fateful bottom of the fourth inning when Norm McMillan led off with a low line drive that “almost carried Clark’s right ear with it.”4 McMillan moved to second on Woody English’s sacrifice bunt. Hornsby, batting .511 in his previous 12 games (23-for-45) with 16 runs scored and 20 runs batted in, took advantage of Clark’s mistake – an inside fastball. According to Thomas Holmes of the Brooklyn Eagle, the “Rajah” “pulled it through the left side of the infield a mile a minute” to drive in McMillan.5 The next batter, Hack Wilson, slashed Clark’s first pitch down the right-field foul line, scoring Hornsby to make it 2-0. The Cubs possessed a “real Jack Dempsey knack for finishing off a slightly groggy pitcher,” wrote Holmes.6

Center fielder Wilson, often derided for his defensive deficiencies, saved a potential run in the sixth inning. With Herman on first, cleanup hitter Harvey Hendrick smashed a deep fly ball. According to Roscoe McGowen of the New York Times, Wilson “stood with his back against the left centre-field screen” to rob Hendrick of a possible extra-base hit.7 Herman, thinking the ball would not be caught, had rounded second. He quickly sprinted back to first base, but had neglected to touch second base. Hornsby took Wilson’s throw and touched second base for the out.

Clark yielded only one “fluke” hit in the final five frames.8 Kiki Cuyler (batting .412 in his last 13 games, 21-for-51) hit a “funny homer.” Irving Vaughan of the Chicago Daily Tribune described how the ball went on a line to the right-field corner, where outfielder Babe Herman was there to field it but “the ball took one hop and vanished from his sight. It had jumped into the extreme end of the grandstand, and being more than the prescribed 250 feet from the plate, it had to be rated a homer.”9 [The ground-rule double took effect in the National League for the 1931 season and a year earlier in the American League.]

Brooklyn’s Hendrick and Bissonette recorded the team’s seventh and eighth hits with one out in the ninth. But Malone, despite permitting 11 baserunners (including one batter he hit), was effective in the pinches. After Gilbert flied to center, the game ended when Hornsby jumped to snare a “lazy liner” off shortstop Jack Warner’s bat to preserve the Cubs’ 3-0 victory.10

On the day the Philadelphia Athletics clinched the AL pennant, Malone registered his 21st victory and fourth shutout en route to leading the NL in both categories (22 and five respectively). Tough-luck loser Clark fell to 14-17. “It seems as though the Robins lacked the killer instinct to as great a degree as the Cubs possessed it,” wrote Holmes.11 Four days later, on September 18, the Cubs clinched their first pennant since 1918.

This essay was originally published in “Winning on the North Side: The 1929 Chicago Cubs” (SABR, 2015), edited by Gregory H. Wolf.