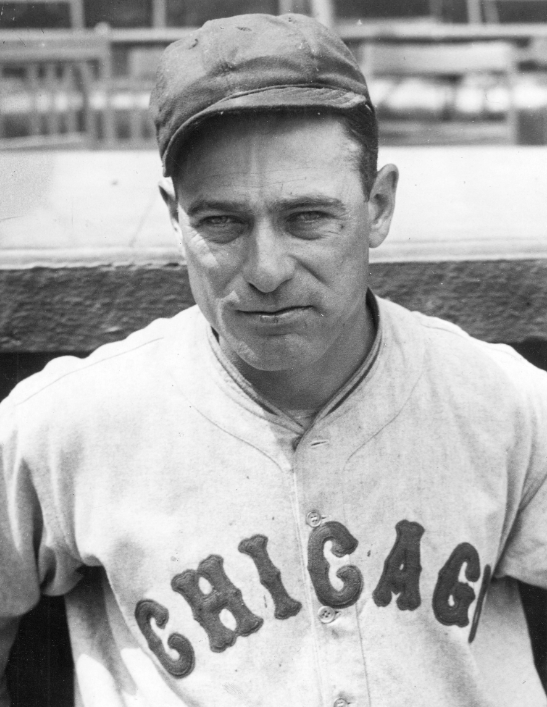 On September 4, 1935, Chicago Tribune sportswriter Irving Vaughan wrote an article analyzing the National League pennant race. He specifically reviewed how the Cubs were faring in a three-way race involving themselves, the New York Giants, and the St. Louis Cardinals. He observed that if the front-running Cardinals played just .500 ball the rest of the season, third-place Chicago would have to win 15 of the remaining 23 contests to win the pennant.1

Based on this, the Cubs’ flag hopes should have faded considerably by the morning of September 14, as St. Louis had gone on to post an 8-3 record. What Vaughan had no way of knowing was that the Cubs would reel off 10 straight wins at the same time. Feasting on second-division clubs, they had taken four straight from the seventh-place Philadelphia Phillies, another four from the cellar-dwelling Boston Braves and the first two of a four-game set against the fifth-place Brooklyn Dodgers.

As 13,328 fans moved through the turnstiles at Wrigley Field on the afternoon of the 14th, many undoubtedly were still trying to take into account what had taken place the day before.2 Larry French, who began the Cubs’ streak on September 4 with his 13th win, had just beat the Dodgers for his 15th victory, scattering eight hits to gain a 4-1 decision. About 300 miles southwest that afternoon, Cardinals ace Dizzy Dean came on to pitch the ninth inning in a 10-10 game against the Giants. Dean, the league’s leading pitcher with 26 wins, gave up three runs. giving the Giants a 13-10 victory.

The outcome of these two games put the Cubs just .004 percentage points behind the Cardinals, essentially in a tie for first. So now, as the third game of the series with Brooklyn was about to begin, Chicago had an opportunity to forge into the lead if they could win and New York could oblige with another defeat of St. Louis.

Starting for the Cubs was the oldest member of their staff, 36-year-old Charlie Root. Root had already earned two wins as part of the Cubs’ burgeoning win streak, including a six-hit shutout on September 10 against the Braves, boosting his record to 13-8 for the year. Facing him on the mound was Brooklyn’s Johnny Babich with a 5-12 record. Accompanying that rather dismal set of numbers was Babich’s even more ominous 6.62 ERA, worst in the National League.3 He had lost his last four decisions. None of this augured well for the Dodgers. Babich’s appearance in the game mirrored the season he had so far experienced. It would be brief and ineffective.

After Root shut the Dodgers down in the top of the first inning, the Cubs immediately went to work on Babich. A walk, error, triple off the bat of center fielder Freddie Lindstrom, and single by catcher Gabby Hartnett combined to send Babich to an early shower after recording just one out. His successor, rookie Bobby Reis, the second of seven pitchers sent out to hurl that afternoon by Brooklyn manager Casey Stengel fared just as poorly, giving up five runs in an inning and a third of pitching.

By the end of the second, Reis had departed the mound, giving way to Tom Baker. Baker in turn was pummeled by a Cubs relentless offense that saw another eight runs cross the plate in the bottom of the sixth. Then Root who had thrown no-hit ball through the first four innings, was seemingly bitten by the hitting bug. He gave up a pair of runs in the fifth and sixth but held what looked to be a commanding 16-4 lead. Root was then touched for five runs in the top of the seventh, three runs coming in on a home run by light-hitting outfielder Buster Mills; his first — and only — homer on the year. The 11-year veteran Root departed the game in the bottom of the inning for a pinch-hitter as Chicago scored its final two runs.

Root was replaced by Roy Henshaw, who in the spirit of things that afternoon, gave up five runs to the suddenly resurgent Brooklyns in the top of the ninth before little-used Cubs righty Fabian Kowalik was called in. Kowalik promptly struck out Johnny McCarthy to end the 18-14 slugfest.

The game’s balance sheet was a pitcher’s nightmare. Every batter in Chicago’s starting lineup managed at least two hits except right fielder Frank Demaree and shortstop Billy Jurges, who had one each. Six doubles and two triples came off the Cubs’ bats. Those doubles included Billy Herman’s major-league-leading 50th and 51st. Even Root, who gained his 14th victory, got into the act with two singles and an RBI. Ten walks also aided their scoring spree. The Dodgers were not offensive slouches either, rapping out 15 hits, including two homers: Mills’s three-run shot and a solo blast by second baseman Jim Bucher.

The Cubs’ streak reflected a team simply overwhelming its competition. The 11 straight wins were fueled by a team batting average of .317 and a team ERA of 2.38, outscoring their opponents by 79-29. It was a micro reflection on the entire season, in which the Cubs would have the highest team batting average (.288), score the most runs (847), and sport the lowest ERA 3.26). But these numbers were for the future. There was still a pennant race going on.

The Cubs’ 18-14 win was but half of the equation that day. In St. Louis, the Giants and Cardinals battled 4-4 into the 11th inning. Successive doubles by pitcher Slick Castelman and Jo-Jo Moore plated a fifth New York run the Cardinals were unable to answer, giving New York a second straight win.4 The Cardinals’ loss gave the Cubs a one-game lead, something unthinkable just a week and a half earlier.

Over the course of the year, New York had taken the lead in late April and relinquished it to St. Louis at the end of August. Would the Cubs now be able to maintain their newly acquired hold on first? They had run off an 11-game winning streak in late July — could they now top that streak?

More to the point was the nature of their future schedule. There was one more game against Brooklyn. Observers could rightfully point out that Chicago had taken advantage of second-division teams. How would they fare against more meaningful competition? Vaughan pointed out that after the Dodgers left, the Giants were coming into town. They were in third, just 3½ games behind Chicago, and had just taken “apart the world champion Cardinal machine for the second consecutive day.”5 After New York the fourth-place Pirates were scheduled to come to Wrigley Field.

All the while looming in the background was the fact that the Cubs would be facing the Cardinals the last five games of the season at Sportsman’s Park. Chicago had done well but the roughest part of the schedule for September remained ahead.

In addition to the sources listed in the Notes, the author also consulted Baseball-Reference.com, Retrosheet.org, and The Sporting News.

3 Technically the leader in highest ERA at that point on the year in the National League was Philadelphia’s Jim Bivin at 6.14 based on individuals qualifying to be ranked in ERA. Babich, whose ERA was nearly half a run per game higher than Bivin’s, had not quite pitched enough innings to qualify for this dubious distinction.