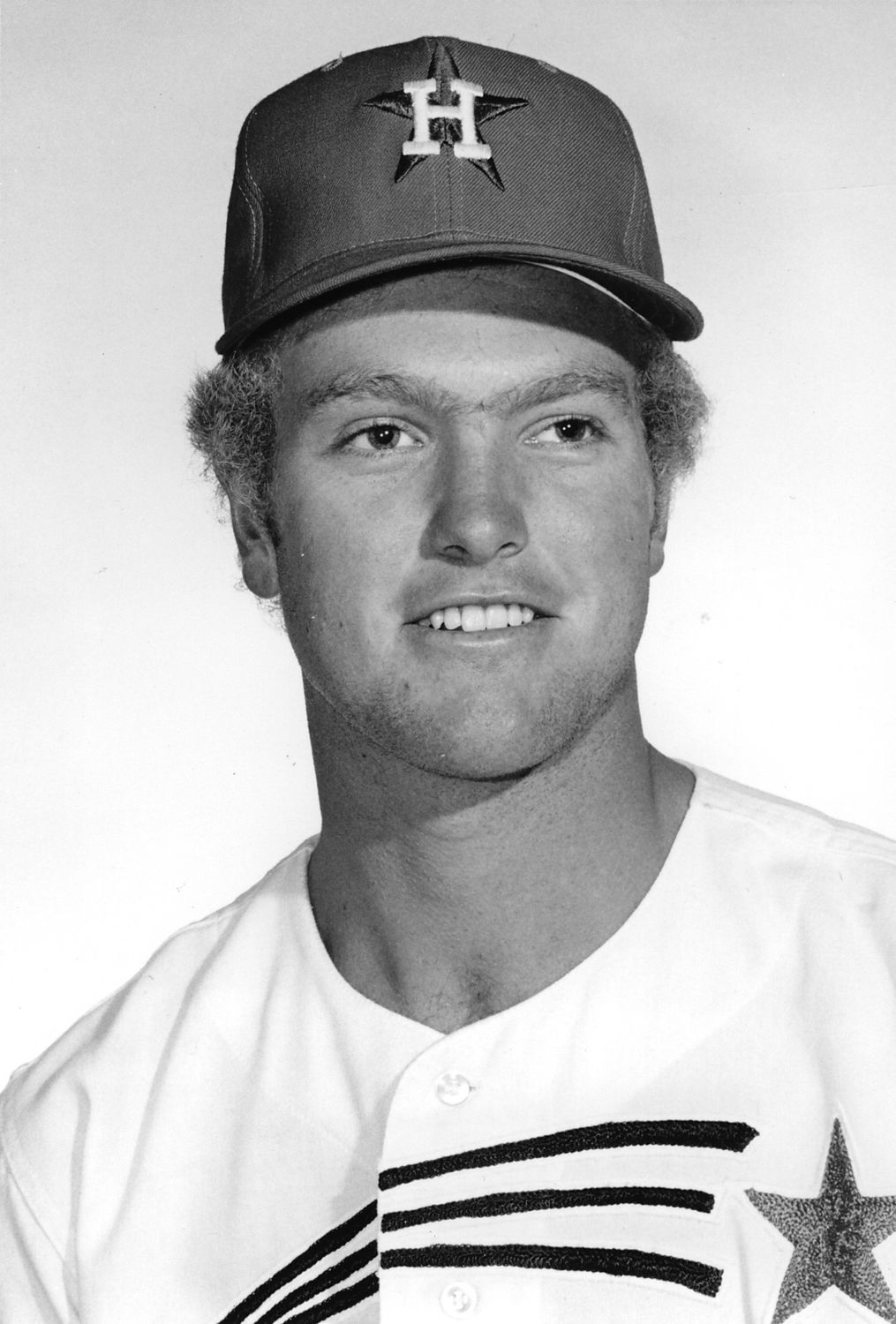 Among trivia buffs, Houston Astros pitcher Larry Yount is often cited as having the shortest career in big-league history. Called into one game in 1971, he was injured while warming up, and was removed without facing a batter. About 1,000 players have reached the big leagues for only one game1 — including defensive substitutes who never touched the ball and pinch-runners who were promptly doubled up — but Yount is believed to be the only such player who never experienced in-game action. (He is also remembered as the older brother of Hall of Famer Robin Yount.)

The game in which Yount appeared is not so celebrated. Most trivia fanatics couldn’t tell you the score of the Braves-Astros matchup of September 15, 1971, or name the batters the ill-starred hurler would have faced had he stayed healthy. But like many big-league games that seem ordinary, this one has other interesting stories to tell, including a play that changed baseball’s all-time record books. Larry Yount may be the most memorable aspect of the game, but he isn’t the only one.

Lum Harris’s Braves and Harry Walker’s Astros came into the Wednesday night game as closely matched teams, hovering around the .500 mark — Atlanta just above it, Houston just below. Atlanta stood in third place in the National League West, 8½ games out of first, while Houston was in fourth, 10 games out.

Both teams had bolstered their benches with a round of September call-ups. The Braves recalled six young players for the stretch, including outfielder Dusty Baker and pitcher Tom House.2 The Astros beckoned for nine, including Yount, pitcher J.R. Richard, and utilityman Derrel Thomas, all of whom donned big-league uniforms for the first time.3

Only 6,513 people turned out for the first of a two-game series. The attendance was about par for the course for both teams: Of the 23 games the Braves played between September 1 and the end of the season, 16 were played to crowds of under 10,000. Knuckleballer Phil Niekro (13-12, 3.00) got the start for Atlanta, while Jack Billingham (8-14, 3.60) was tapped to start for Houston.

The Astros pieced together a run in the bottom of the first, starting when Roger Metzger reached on an error by Atlanta shortstop Marty Perez. Joe Morgan singled Metzger to second and César Cedeño sacrificed both runners up a base. Bob Watson drove in Metzger with a groundout to Perez.

The Braves replied in the next half-inning when Mike Lum walked, Darrell Evans doubled him to third, and Sonny Jackson drove in Lum with a groundout to second base to make the game 1-1. The score stayed there until the top of the fourth, when the Braves assembled a two-out rally featuring run-scoring singles by Perez and Niekro to make the game 3-1. It was one of only four RBIs for Niekro that year.

The game’s historic moment came in the top of the fifth, when Braves first baseman Hank Aaron homered off Billingham with one out to make the score 4-1. The home run — Aaron’s 44th of the season and 14th in a 24-game span4 — represented Aaron’s 1,954th career run batted in, tying him for third place with Ty Cobb on the all-time RBI list as calculated at the time.5 It also kept Aaron one behind Pittsburgh’s Willie Stargell in the National League home-run race, which Stargell eventually won by a one-homer margin. Finally, the Billingham-Aaron matchup anticipated the even more historic confrontation of April 4, 1974, when Aaron hit homer number 714 off Billingham to tie Babe Ruth’s record.6

The game remained 4-1 at the top of the ninth, when Walker called on Yount to make his major-league debut. He was scheduled to face the top of the Braves’ order — Felix Millan, .332-hitting Ralph Garr, and Aaron. (Astros starter Billingham had left the game for a pinch-hitter after five innings. Skip Guinn, another September call-up for Houston, followed with three shutout innings.7)

At the time, Yount was considered one of the Astros’ top five pitching prospects.8 A fifth-round draft pick out of high school in 1968, he solidified his status as an up-and-comer with the 1970 Southern League champion Columbus Astros.9 After a disappointing 1-4 start that season, he rediscovered his breaking stuff and won nine of his next 11 decisions, including several shutouts.10 His 1971 numbers at Triple-A Oklahoma City were uneven — a 5-8 record and 4.86 ERA — but he struck out 121 hitters in 137 innings and posted some strong performances, including eight innings of shutout ball against the Omaha Royals on May 8.11

Yount fulfilled a week’s military obligation before reporting to the Astros. Years later, he blamed his foreshortened appearance on stiffness from his week off: “There was no question at the time that I had no business trying to pitch that soon. But I was a 21-year-old kid, and like any 21-year-old, I wasn’t going to turn down a chance to show them what I could do. I went to the mound and took a couple of tosses, but (my elbow) continued to hurt, so I came out.”12

Veteran Jim Ray replaced Yount and pitched a scoreless inning, giving up a single to Garr. Niekro then returned for the bottom of the ninth and surrendered a harmless second run to the Astros on a run-scoring groundout by yet another September call-up, John Mayberry. When César Gerónimo struck out for the last out, it put the capper on a four-hit complete game for Niekro, completed in 2 hours and 10 minutes.

The game included one other interesting detail: Just as it marked the end of the line for Hall of Famer Robin Yount’s lesser-known brother, it was also close to the end for Hall of Famer Hank Aaron’s less celebrated sibling. Tommie Aaron, playing the last of seven seasons for the Braves, replaced Evans at third base for the final two innings. He played in only five more games after September 15.

The biggest baseball news of September 15, 1971, was made in Chicago, where the Oakland Athletics — leading their division by 14½ games — clinched at least a tie for their first division title by beating the White Sox. Neither Atlanta nor Houston figured into the National League postseason picture. The season ended with the Braves still in third place, just above .500, and the Astros in fifth, a few games below .500.

Yount came close to landing a bullpen job with the Astros in spring 197213 and was still on the team’s preseason roster in 1973,14 but struggled with his control15 and was never again consistently successful enough to earn a call-up. After the 1975 season, when he went 8-16 with a 4.82 ERA between Double-A Thetford Mines and Single-A Burlington, he retired, eventually finding success in the commercial real-estate business in Arizona. Years later, he said the elbow trouble that ruined his only big-league game was not a factor in his later struggles: “I just never quite got the job done.”16

In addition to the specific sources cited in the Notes, I used the Baseball-Reference.com and Retrosheet.org websites for general player, team, and season data and the box scores for this game.

1 As of May 2020, 999 players are listed on Baseball Reference’s “cup of coffee” list of players appearing in a single game. baseball-reference.com/friv/batters-coffee.shtml.

6 According to Retrosheet, Aaron hit .333 with five homers in 42 lifetime at-bats against Billingham.

13 John Wilson, “Fifth Starter Seems Only Astro Quest,” The Sporting News, March 4, 1972: 29. This article lists Yount as a candidate for one of two or three relief jobs coming out of spring training. Others competing for the jobs included Guinn, Fred Gladding, Buddy Harris, Ron Cook and Lance Clemons.

16 “Whatever Happened to … Larry Yount?”