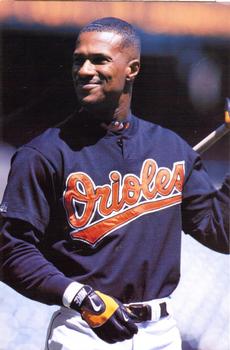 Eric Davis was used to overcoming serious injuries. His aggressive, all-out style of play had landed him on the disabled list 11 times in his first 13 years in the big leagues.1 In the 1990 World Series as a member of the Reds, he suffered a life-threatening injury when he dove for a ball and lacerated his kidney. A physician compared his damaged organ to a tomato thrown on the sidewalk.2 Davis spent 11 days in the hospital, and his doctor recommended taking the next season off.3 He was in the Reds’ Opening Day lineup the following April.4

In 1994, while with the Tigers, he had neck surgery for a herniated disk and was told he would be risking paralysis if he continued to play the game with reckless abandon.5 The 32-year-old Davis, having been through eight surgeries in the previous seven years, decided to retire from the game. He sat out the entire 1995 season. Friends encouraged him to reconsider. Believing he had more baseball left in him, Davis returned to action in 1996, signing with the Reds. He posted his best season in six years, earning the NL Comeback Player of the Year Award.

Davis signed a one-year, $2.2 million contract with the Baltimore Orioles for the 1997 season with an option for an additional year. He got off to a great start with his new team, hitting a blistering .395 through May 7, when the injury bug bit him again. This time it was a strained hamstring. Rather than wait until the injury was fully healed, he returned on May 12 as the team’s designated hitter. Davis also began suffering from a mysterious ache in his right side.6 He was removed from a May 24 game in Cleveland because of excruciating stomach pain, and he spent four hours in hospital undergoing tests.7 The team’s trainer said it didn’t appear to be anything serious. A coach suggested it may have been something he ate.8

Davis was feeling well enough to play the next day, although he didn’t play very well. He went 0-for-5 to lower his batting average to .302. On May 26 in New York, he was scratched from the lineup with an unrelenting stomach pain.9 He immediately returned to Baltimore, where it took almost two weeks for doctors to come up with the correct diagnosis: There was a cancerous tumor in Davis’s colon about the size of a baseball.10 On June 13 a medical team successfully removed the tumor, along with one-third of his colon.11

In the third inning of a June 17 game at Camden Yards, Davis’s image was displayed on the scoreboard, along with a statement from him thanking everyone for their support.12 Cal Ripken Jr., who was leading off the inning, paused so fans could give his ailing teammate a stirring round of applause. Davis, watching from his hospital bed, was touched. Yet he couldn’t help wonder why he was receiving so much more support than he had in the past.13 Earlier in his career, he had even been accused of being a malingerer.14 “The thing was, people could relate to cancer,” he said. “Most of them had never known anyone with a lacerated kidney or a ruptured cervical disk, but everyone knows someone who has cancer.”15 Later that month, Baltimore owner Peter Angelos announced that the club would pick up his option for the 1998 season.16

Davis started weekly chemotherapy sessions on July 16, with his treatments scheduled to run into December.17 The Orioles, leading the AL East by 5½ games when his chemo began, worked under the assumption that he was out for the season.18 General manager Pat Gillick addressed the loss of Davis by trading for Gerónimo Berroa in late June; one month later he acquired Harold Baines. Davis, however, refused to give up hope of rejoining the pennant race. He began working out with the club, and on August 30 he took batting practice for the first time since his surgery.19 A reporter asked him why he would even bother trying to return that season. Davis was astounded. “Why?” he replied. “Because they’re paying me, that’s why.”20

Davis underwent his regular chemotherapy session on September 10.21 To the surprise of many, he returned to the lineup five days later in the first game of a day-night doubleheader against the Indians at Camden Yards. The Orioles came into the twin bill 6½ games ahead of the second-place Yankees with their magic number for clinching at least a wild-card playoff spot down to one.

An energized crowd of 41,602 was thrilled to see Davis back in uniform. They gave him a standing ovation when the starting lineup was introduced and another when he ran out to take his position in right field to begin the game.22

After a one-two-three top of the first inning, Jeffrey Hammonds and Aaron Ledesma walked to open the bottom of the frame. That brought Davis to the plate, and the fans saluted him with a rousing standing ovation that went on for more than a minute.23 “It made me teary-eyed a little bit,” Davis said after the game. “That’s when I tipped my hat to the crowd, to let them know I felt what they were giving me.”24

Davis took the first two pitches for balls before he flied out to deep right-center field, which allowed Hammonds to advance to third base. Berroa singled into right field to score Hammonds, and Rafael Palmeiro followed with an RBI single to put Baltimore out front, 2-0.

The Orioles extended their lead to 4-0 in the bottom of the second on an RBI double by Hammonds and a sacrifice fly by Ledesma. Davis ended the inning by grounding out to the third baseman, Matt Williams.

The Indians got on the scoreboard in the top of the third inning on a solo home run by Omar Vizquel. At the end of the fourth inning, a tiring Davis went to manager Davey Johnson and told him he wanted one more at-bat.

Cleveland loaded the bases in the top of the fifth inning against Baltimore starter Esteban Yan. With David Justice at the plate, Yan uncorked a wild pitch to score Brian Giles from third. Justice hit the next pitch into right field for a two-run single that tied the game, 4-4.

Davis took his final at-bat of the game in the bottom of the fifth inning. He hit a high chopper to Williams, sprinted to first, and was thrown out on a close play. Davis ended his day 0-for-3 at the plate, but he looked like his old self patrolling the outfield. He was replaced in right field in the top of the sixth inning by B.J. Surhoff.

Cleveland pulled ahead 5-4 in the top of the seventh inning on an RBI groundout by Williams. The Orioles reclaimed the lead in the bottom of the inning when Hammonds launched his 20th home run of the year, a mammoth two-run shot off reliever Eric Plunk that traveled 460 feet.25 Armando Benítez and Randy Myers shut the Indians down the rest of the way to secure the victory and clinch a playoff spot. Baltimore had reached the postseason in consecutive seasons for the first time since 1973-74.

After going 3-for-20 in his first six games back, it was unclear if Davis would be added to the postseason roster. On September 27 against the Brewers, only one day after his latest chemotherapy session, he went 4-for-5 with a home run to remove any doubt about his playoff status.26

Davis provided more than just inspiration for his teammates in the postseason. After rescheduling a chemotherapy session so he could play in Game One of the ALDS against Seattle, he knocked in a pair of runs off Randy Johnson in a 9-3 Baltimore victory. The Orioles went on to take the series three games to one. With the Orioles facing elimination in Game Five of the ALCS against Cleveland, Davis knocked in the decisive run with a ninth-inning pinch-hit home run. The Indians went on to win the series on an 11th-inning home run by Tony Fernández in Game Six.

Instead of finishing his chemotherapy in December, Davis had an extra round of treatment added for insurance. His last session was on February 11, 1998, nearly seven months after his chemo began.27 He went on to have a fabulous season with the Orioles, finishing fourth in the American League with a .327 batting average, slamming 28 home runs, and knocking in 89 runs. Ray Miller, Baltimore’s pitching coach in 1997 and manager the following two seasons, offered some valuable insight into Davis’s extraordinary journey: “The shame is that it took cancer for people to realize what a good guy, a good person, Eric Davis is.”28