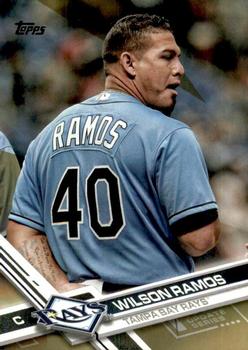 As they played through the series, many of the players remained focused on what was happening in Tampa Bay. “We have to hope for the best. There’s really nothing that you can do. It’s kind of a helpless feeling of just sitting back waiting and seeing what the weather is going to do,” reflected the Rays’ Jake Odorizzi.2

The Rays were given notice that the team could return to Tampa Bay when they learned that there was not any damage at their ballpark. Evan Longoria noted, “There is a lot of tension that has been relieved and uneasiness that has kind of settled after three days. It should be nice to go out and play a baseball game without that worry on your mind.”3

The Tampa-St. Petersburg area was still struggling in the aftermath of the hurricane and players offered their support of those in need by collecting nonperishable food items. “With the hurricane, a lot of people lost a lot. We’re trying to help them out, get some food and necessities to get them back on their feet and get them going again,” said Rays pitcher Brad Boxberger.4 The team even offered future ticket vouchers to fans who came to the weekend series after the hurricane with canned food items.

Tampa Bay entered its shortened home series against the Red Sox at 72-75 and 5½ games behind the Minnesota Twins for the second American League wild-card spot. Rays manager Kevin Cash, asked if returning to their home field could help their chances, said, “If we win games, I guess it helps. If we don’t, that probably didn’t matter at all. We’ve just got to play really good baseball. We got to find ways to win games.”5

Boston started left-hander Chris Sale and Cash decided to use an almost entirely right-handed lineup against him. “We haven’t had a ton of success against him, for fairly good reasons. Get these righties, maybe a different look, maybe get us some early runs.”6

The Rays sent Matt Andriese to the mound against Sale and the Red Sox. The right-hander had missed three months of the season with a right-hip stress reaction. Andriese struggled after his return on August 28. He surrendered 11 earned runs in just 6⅔ innings. Andriese had lasted only 1⅔ innings in his last start, at Boston a week earlier.

Boston grabbed the lead in the first inning. Xander Bogaerts was hit by a pitch and went to second on Dustin Pedroia’s groundout. When Andrew Benintendi singled in the hole between first and second, Bogaerts came home easily to put Boston up 1-0.

Tampa Bay wasted no time in tying the game in its half of the frame. Kevin Kiermaier, the sole left-hander in the lineup, hit Sale’s first pitch for a single. He moved to second on a groundout and came home with the tying run when Longoria singled to left field.

The Red Sox struck again in the fourth when a solo home run by Mitch Moreland pushed them ahead by a run. But the lead didn’t last as Wilson Ramos countered with a two-run homer in the bottom of the inning, giving the Rays a one-run lead. They added to their lead in the bottom of the sixth on a solo home run by Adeiny Hechavarraia. Ramos hit his second home run of the night in the eighth and the Rays led 5-2 with just three outs remaining.

When Andriese gave up consecutive singles in the fifth, Cash had replaced him with Sergio Romo, the second of 12 pitchers he would use in the game. The Rays corps of relievers kept the Red Sox in check until the ninth. Alex Colome, the seventh Rays pitcher, walked leadoff batter Moreland, who advanced on a wild pitch. Rafael Devers then hit a sharp grounder. When second baseman Danny Espinosa bobbled the ball, Moreland scored to narrow the Rays’ lead to two runs.

With Devers on second, pinch-hitter Christian Vazquez hit a single that put runners at the corners. Sandy Leon then singled, scoring Devers to narrow the gap to one run. Colome finally got the first out when, on Jackie Bradley Jr.’s deep fly, Kiermaier “made a catch for the ages, diving to snare the ball as he tumbled onto the warning track.”7 Kiermaier reflected on his defensive heroics after the game, saying, “I feel like I can put my talents on display in many different ways, and I think I showed that with dives, athletic ability, jumping, throwing, whatever it takes. That’s the pride I take in my defense.”8

Two pitches after Kiermaier’s catch, Bogaerts singled and the game was tied, 5-5. After Colome struck out Pedroia, left-hander Jose Alvarado came out of the bullpen and retired Benintendi on a groundout that left two runners stranded.

When Craig Kimbrel struck out three of the four batters he faced in the bottom of the ninth, the game went to extra innings. The Red Sox loaded the bases in the 11th with one out but failed to score. Deven Marrero led off with a double. Blake Swihart, who had taken over catching duties in the ninth, laid down a perfect bunt. The Rays had no play on him at first and Marrero ended up on third.

Swihart had been called up on September 1 but had made only one appearance, on the 3rd. “That was great. I was ready when my name was called. I hadn’t played in a few weeks so even 90-mph was looking pretty fast to me. But I felt awesome.” Red Sox manager John Farrell was pleased with Swihart’s work: “He hasn’t caught in a few weeks and all of a sudden jump in the game in the ninth inning. Not an easy task to undertake.”9

When Jackie Bradley Jr. grounded to shortstop, Marrero retreated to third before racing for the plate. He was called safe but Cash challenged the call and it was overturned, leaving the score tied.

Boston grabbed the lead for the third time in the 14th inning on three consecutive singles. But they couldn’t hold it: Kiermaier hit a solo home run in the bottom of the frame. Cash later said that Kiermaier did “everything in his power to give us a chance to win. A lot of special plays were made.”10

The Red Sox bats lit up in the 15th. Austin Pruitt walked leadoff batter Bradley and surrendered a single to Bogaerts. An error by second baseman Brad Miller allowed Boston to retake the lead and the Red Sox kept piling on the runs. Chase Whitley replaced Pruitt but couldn’t silence the Boston batters. Benintendi and Moreland singled and Boston’s lead was now three runs. An error by first baseman Logan Morrison and a second double by Marrero plated three more runs. Marrero scored on the Red Sox’ fifth hit of the inning, a single by Bogaerts, before Whitley finally got the third out with the score 13-6.

Blaine Boyer was sent to the mound to seal the game for the Red Sox. Corey Dickerson singled with one out and reached third on defensive indifference and a passed ball. But he couldn’t score as the Rays bats fell silent.

The loss was a disappointing return home for the Rays. The team used 28 players and set two team records in defeat. Their batters struck out a record 24 times and their 12 pitchers, another record, couldn’t get them a win in front of the 16,006 fans who showed up amid the region’s recovery efforts. Cash said he was disappointed with the loss but added that the team would continue to “do what we need to as an organization to help families and businesses alike that are in need. We can provide those roles.”11

Tampa Bay finished the season with an 80-82 record, five games behind the Twins for the wild-card spot. The Red Sox won the series and eventually took the division title but fell to the eventual World Series champion Houston Astros in the division series.