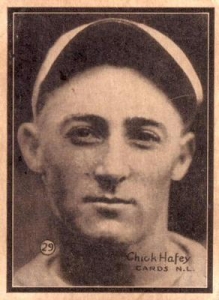 The St. Louis Cardinals were in a fight for the National League pennant late in the1926 season. If they prevailed, it would be the first for the franchise in the modern era. Their chances looked promising on September 16: As they faced the Philadelphia Phillies, they were a half-game behind the Cincinnati Reds.

On the other hand, the doubleheader at the Baker Bowl didn’t have any consequence for the Phillies. As the NL’s last-place team, they were in a familiar spot in the standings when they took on the Cardinals. The Phillies hadn’t finished higher than sixth place in the National League since a second-place finish in 1917. The Cardinals had already won the first game of the six-game series that started the day before.

Six-time National League batting champion Rogers Hornsby was in his second season as player-manager of the Cardinals. His counterpart with the Phillies was Art Fletcher, who was in his fourth season at the helm. Fletcher had finished his playing career the year before taking the Phillies’ managerial job.

Twenty-five-year-old Flint Rhem (18-7) took the hill for the Cardinals, while the Phillies countered with 31-year-old Jack Knight (3-10). Rhem was in the process of turning in the best season among a Cardinals starting staff that included veterans Pete Alexander (acquired from the Cubs at midseason), Jesse Haines, and Bill Sherdel.

The contest’s first two innings started out like any other normal game, as the Phillies held an early 2-1 lead. Then the floodgates opened for Cardinals hitters in the top of the third inning when they produced 12 runs. It was the second time a National League team had compiled that many during the season. The New York Giants accomplished it 13 days before, on September 3, against the Boston Braves.

In the game-changing inning, 12 consecutive Cardinals batters reached base on seven singles, two doubles, two walks, and a fielding error. Altogether, 16 Cardinals came to bat in the inning. In 9 of 11 situations with runners in scoring position, batters produced at least one run. Highlights of the inning included Les Bell’s two run-scoring singles and Jim Bottomley’s double with the bases loaded.

The Phillies used four relievers after Knight started the disastrous inning. Mike Kelly, Ed Baecht, and Ray Pierce failed to retire a batter during their abbreviated stints. Pete Rambo was able to close out the inning giving up only one unearned run, as the score increased to 13-2.

Rambo came back in the fourth inning and retired the side, one of only twice the Cards were set down in order. But then he gave up four more runs in each of the fifth and sixth innings to make the score 21-3. The Cardinals’ highlights of both innings were provided by Chick Hafey, who slammed two-run doubles.

Meanwhile Rhem was replaced by Herman “Hi” Bell in the bottom of the fifth. (It is not known whether Rhem was replaced by Hornsby because of an injury or just to give him rest.) Bell pitched the rest of the game for the Cardinals, facing only one batter over the minimum during his five innings.

Lefty Taber replaced Rambo in the seventh inning and appeared to get by unscathed by the Cardinals until they pushed across two more runs in the ninth for a final score of 23-3.

The game set a record for number of players used (36). The old record (35) was held by Cleveland and Detroit in American League on April 26, 1921, and Philadelphia and New York in the National League on September 6, 1924.1

Every batter in the Cardinals lineup, including substitutes, got a hit except starting right fielder Billy Southworth. Altogether, they garnered 22 hits and eight walks. Leadoff batter Taylor Douthit, in his first full season with the Cardinals, had a busy day on the bases. He scored five runs by getting on base six times in seven plate appearances, including four walks. The Cardinals were 16-for-26 with runners in scoring position. Hafey led the team with five RBIs, while Bottomley accounted for four.

The Cardinals also took game two of the doubleheader, 10-2. They heaped another 19 hits on Phillies pitchers. In addition to his seven-hit complete game, Cardinals hurler Art Reinhart had the most hits of the day with a 4-for-5 performance.

The twin-bill wins put the Cardinals in a tie with Cincinnati. When the Cardinals won the fourth game of the series the next day to claim first place, they never looked back. The Reds ultimately fell apart down the stretch, losing seven of their last 10 games (including one tie). The Cardinals finished the season two games ahead of Cincinnati.

St. Louis won its first pennant since it became an entry in the National League in 1892.2 The team’s highest finish prior to 1926 had been third place; most of its seasons found it a second-division club. The 1926 season’s results marked a historic turnaround for the franchise; it would win four additional pennants in the next eight years. The Cardinals took World Series titles in 1926, 1931, and 1934.

The 1926 Cardinals defeated the formidable New York Yankees in dramatic fashion in a seven-game World Series. The Yankees team was powered by Babe Ruth, Lou Gehrig, Bob Meusel, and Tony Lazzeri during the regular season. However, Cardinals pitching held the mighty lineup to 21 runs during the Series (with 10 coming in Game Four alone when Ruth slammed three home runs). The 39-year-old Alexander was responsible for winning decisions in Games Two and Six and then recorded a save in the final game. Haines was the winning pitcher in Games Three and Seven. Bottomley, Tom Thevenow, and Southworth had for 10 hits apiece for the Cardinals.

Hornsby would have his best year as a manager with the 1926 club. Unable to reach an agreement on a new contract with St. Louis after the season, he was traded by the Cardinals to the New York Giants, and he would go on to manage five other clubs.

In addition to the sources cited in the Notes, the author also consulted Baseball-Reference.com, Retrosheet.org, and the following: