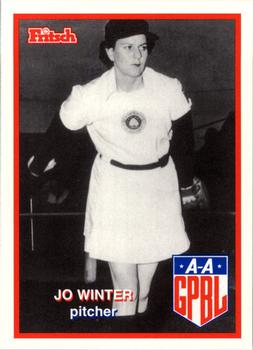 There’s a tired sports cliché that goes something like this: To win in the playoffs, a team needs its best players to be its best players. That’s exactly what happened to the Racine Belles in September 1946 when two of the team’s all-stars, Sophie Kurys and Joanne Winter, took control of the championship series against the Rockford Peaches. The Belles clinched the league title in a dramatic Game Six that saw Winter pitch 14 shutout innings and Kurys use her supreme baserunning skills to score the game’s only run. It was perhaps the greatest game ever played in the All-American Girls Professional Baseball League (AAGPBL).1

Kurys and Winter had been with the Belles since the league’s inception in 1943, and both enjoyed career years in 1946.

Kurys set several league records that season, including most stolen bases (201),2 walks (93), and runs scored (117).3 The 21-year-old finished second in the league with a .286 batting average, and she led all second basemen with a stellar .973 fielding percentage. Her outstanding all-around performance earned her the league’s Player of the Year Award.

Although Winter had modest success in her first three years in the league, she was still unsatisfied with her pitching. She was tutored daily in the offseason by a pitcher in Phoenix, and he helped simplify her delivery.4 Winter’s hard work paid huge dividends. She won as many games in 1946 as she had in her first three seasons combined, going 33-10 with a 1.19 ERA. Her 33 wins set the all-time single-season record for the AAGPBL.5 Winter set another league record in August by tossing 63 consecutive scoreless innings.6

After starting the season with a 12-15 record, the Belles went 62-23 (.729) the rest of the way to win the pennant by three games over the Grand Rapids Chicks. They easily defeated the third-place South Bend Blue Sox three games to one in the first round of the Shaughnessy playoffs. Fourth-place Rockford upset Grand Rapids in the other first-round series, setting up a best-of-seven championship series between the Peaches and Belles. The matchup ensured that the AAGPBL would have its first two-time winner, as Rockford was the defending champion and Racine had triumphed in 1943.

After Racine won three of the first four games in the series, Rockford’s Millie Deegan staved off elimination in Game Five by tossing a five-hit shutout.7

The teams returned to Racine for Game Six, which featured a marquee pitching matchup between two of the league’s top hurlers. Winter got the start for the Belles, while the Peaches countered with 20-year-old Carolyn “India” Morris (29-13, 1.42 ERA).8 The Phoenix residents had faced each other in Game Two and Game Four, with Winter outdueling Morris in a pair of low-scoring affairs.9

Winter did not have her best stuff in Game Six, but she was able to wiggle out of trouble each time Rockford threatened to get on the scoreboard. The Peaches’ first real scoring chance came in the top of the second when right fielder Rose Gacioch hit a one-out triple; she was stranded on the basepaths. In the third, Rockford loaded the bases, only to come up empty again.

Winter had plenty of help behind her, as spectacular plays by outfielders Eleanor Dapkus (later Wolf) and Edie Perlick (later Keating) helped keep Rockford off the scoresheet in the early innings.10 Perlick’s running, leaping grab was particularly impressive. “I can still see it, to this day,” Kurys said in a 1996 interview. “It was the most tremendous catch I’ve ever seen in my life, and it saved a [inside-the-park] home run.”11

The Peaches loaded the bases in the top of the eighth and again they failed to score. Rockford had at least one baserunner in eight of the first nine innings,12 yet Winter’s shutout remained intact. 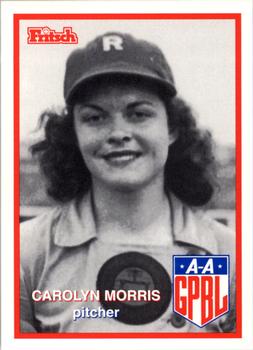 Morris, on the other hand, was locked in. She retired the first 18 Racine batters she faced before losing her perfect game on an error by third baseman Velma Abbott to open the bottom of the seventh.13 The only other baserunner Morris allowed through nine innings came on a walk in the bottom of the ninth. With the game still scoreless, she was forced to take her no-hit bid into extra innings.

Morris lost the no-hitter when Dapkus singled in the bottom of the 10th. The next batter, Maddy English, also singled before the rally fizzled, leaving the potential winning run on base.14

The Peaches had a golden scoring opportunity in the top of the 11th when they loaded the bases with nobody out. For the third time in the game, Winter escaped unscathed from a bases-loaded situation.

Racine had another great chance to put the game away in the bottom of the 12th. Kurys led off with a single to center field, and she stole second and third, giving her four stolen bases in the game. After Morris hit Betty “Moe” Trezza with a pitch to put runners on first and third, Rockford manager Bill Allington brought Deegan in to pitch.

Deegan, a former infielder, had been converted into a pitcher earlier in the season.15 Despite her inexperience, it wasn’t surprising that Allington turned to her in a pinch. After posting a 2.46 ERA in 21 regular-season appearances, Deegan had gone 4-0 in the playoffs, including two shutouts in elimination games.16

Deegan issued an intentional walk to Lavonne “Pepper” Paire (later Davis) to load the bases with nobody out. She calmly retired the side, sending the game to the 13th inning.

After a relatively quiet 13th, Winter recorded her second one-two-three inning of the game in the top of the 14th.17 The Peaches had recorded 13 hits, four walks, a hit-by-pitch – and zero runs in 14 innings. Somehow, Winter had managed to strand 19 Rockford baserunners.

With one out in the bottom of the 14th, Kurys singled through the left side of the infield. The “Flint Flash” stole second with Trezza at the plate for her fifth stolen base of the game. Since Trezza had batted .175 in the regular season and was 3-for-24 in the series, Allington was expecting a bunt, so he brought in the Rockford infield.18 But Trezza was swinging away, and she hit a sharp grounder through the right side of the infield into right field. Although Gacioch was playing a shallow right field, Kurys was running on the pitch, and manager Leo Murphy waved her home.19 She used her signature hook slide to narrowly avoid the tag and score the championship-winning run.20

The 5,630 fans in attendance went wild the moment Kurys slid safely across home plate.21 The Racine Journal-Times reported that “her teammates and hundreds of fans swarmed onto the field to sweep up the girl who had staged an almost single-handed offensive against the Peaches.”22 Trezza didn’t see the play at the plate, but the roar of the crowd told her everything she needed to know.23 The chaotic scene was still fresh in her mind 50 years later. “The team jumped on Sophie and I got lost in the crowd,” Trezza recalled. “I do remember a fan on the first base line, shaking my hand. He put a $5 bill in it and before I realized what he did, he disappeared.”24

The huge crowd brought the Belles attendance to 102,413 for the season, a team record.25 In addition to Racine’s entertaining brand of baseball, fan interest had been boosted that season by the broadcasting of games on WRJN radio for the first time, along with the usual positive coverage from the Racine Journal-Times.26

This game marked the high point of Racine Belles baseball. Despite winning the Western Division pennant in 1948, attendance began to drop that season, and it plummeted to only 29,000 fans in 1950.27 After three years of losing money, the team was disbanded in late September 1950 and the franchise was reassigned to Battle Creek, Michigan, for the 1951 season.28

Winter and Kurys continued to play for Racine until the franchise was moved.

The AAGPBL began naming All-Star teams in 1946, and Kurys was selected as the league’s All-Star second baseman four times (1946-49).30 She holds the career record for most stolen bases (1,114) and most runs scored (688), although no run was as important as the one she scored in Game Six of the 1946 championship series. Memories of that thrilling game remained with her for the rest of her life. Asked about it in 2011, Kurys acknowledged that she had “replayed that 1946 game [in her mind] a thousand times.”31

In addition to the sources cited in the Notes, the author consulted AAGPBL.org and The All-American Girls Professional Baseball League Record Book. Box scores and standings were referenced in the Kenosha Evening News, South Bend Tribune, and Racine Journal-Times. 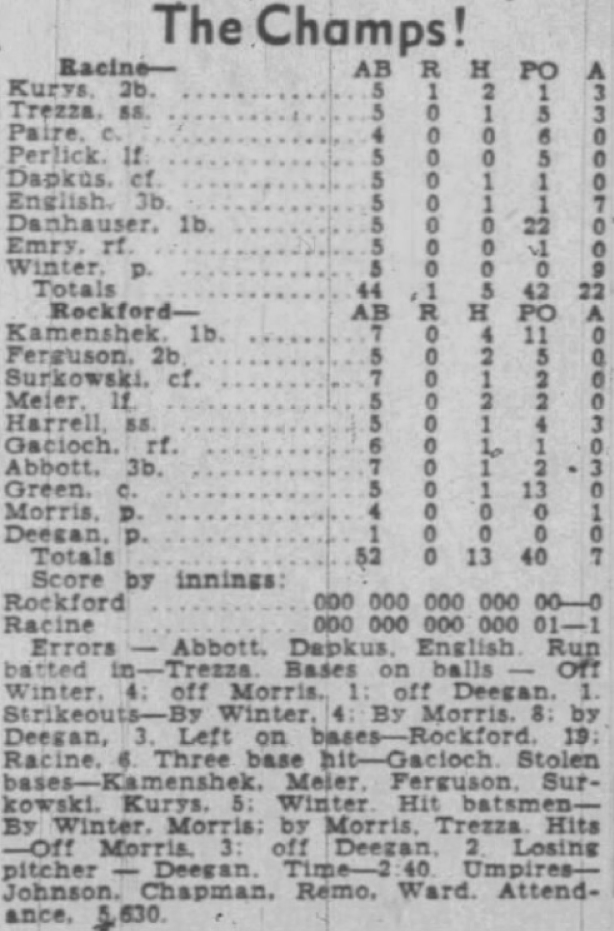 1 AAGPBL president Max Carey attended the game and he called it one of the best games he had ever seen − in any league. Jim Sargent, We Were the All-American Girls: Interviews with Players of the AAGPBL, 1943-1954 (Jefferson, North Carolina: McFarland & Company, 2013), 64.

3 Her single-season records for most stolen bases, walks, and runs scored were never eclipsed.

6 Winter’s streak began when she threw eight scoreless innings to finish an August 14 game against Muskegon. She threw six consecutive shutouts between August 17 and 28 (the August 21 game against Peoria was only seven innings in duration). Her streak was broken on August 30 against South Bend when she gave up an unearned run in the fourth inning. Winter’s record of 63 consecutive scoreless innings was never surpassed. “Jo Winter Chalks Up 28th Win; Hutchison Slated to Hurl Tonight,” Racine Journal-Times, August 15, 1946: 34; “Racine Belles’ Margin Slashed to Four Games,” Racine Journal-Times, August 31, 1946: 8.

13 “Belles Are Strong Finishers, Which Makes Them Champs.”

14 The singles by Dapkus and English were deduced from the box score. Since only two Racine batters reached base in the first nine innings and there were no double plays in the game, Kurys could not have batted in the ninth. Other than Kurys and Betty “Moe” Trezza (who singled in the 14th inning), Dapkus and English had the only other hits in the game. “Belles Win Playoff Crown, Tip Peaches, 1-0, 14 Innings.”

16 In addition to Deegan’s shutout in Game Five of the championship series against Racine, she tossed a three-hit shutout in the decisive Game Five in the first round against Grand Rapids. “Rockford Wins Berth in Playoffs, Blank Chicks, 2-0,” Racine Journal-Times, September 10, 1946: 10.

17 “Belles Are Strong Finishers, Which Makes Them Champs.”

27 Heaphy and May, 237. Reasons for the precipitous drop in attendance included the “return to normalcy following the war, the spread of television, advances in the travel industry (including personal travel) and the rise of the nuclear family.”

30 Kurys would have earned more than four All-Star selections in her career had the AAGPBL named teams between 1943 and 1945.