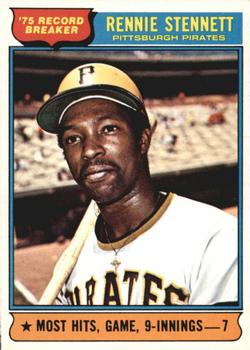 While pulling on his gray Pittsburgh road uniform in the visitors’ locker room at Wrigley Field on the morning on September 16, 1975, Pirates second baseman Rennie Stennett grimaced in pain. Unsure if he would be able to play, Stennett gazed down at a heavily-taped sprained ankle “which he said has been hurting him for about a week,” Richard Dozer reported in the Chicago Tribune.2

The previous afternoon, Stennett had started both games of a doubleheader at Wrigley against the Chicago Cubs, but had to be relieved by rookie Willie Randolph in the seventh inning of the nightcap. The twin-bill split had left the Pirates with an 85-64 record and a six-game lead over the Philadelphia Phillies in the National League East with two weeks to play, while the Cubs sat in fifth place with a 72-79 mark.

Meanwhile, there was turbulence within the Cubs’ infield lineup as well. In a strange sight, All-Star shortstop Don Kessinger — a fixture at the position since 1964 — had, in the past week, been shifted to third base by manager Jim Marshall. The move marked Kessinger’s first non-shortstop appearances in his career; he was filling in for the injured Bill Madlock (the National League batting leader at .362, who was sitting out with a fractured thumb). Getting a try at shortstop in Kessinger’s place was Dave Rosello, who had scored 100 runs during the summer as the shortstop for the Cubs’ Triple-A team at Wichita.

Unbeknownst to all at the time was that Kessinger was performing in his final days in a Cubs uniform –he was traded to the St. Louis Cardinals a month later.

With autumn approaching and the thoughts of Chicago sports fans drifting toward football, only 4,932 showed up at Addison and Clark to witness a historic performance. Among those in attendance was Chicago White Sox pitcher Jim Kaat, who had just returned to the city from a White Sox road trip. Kaat, however, was among the many spectators who would opt to leave the ballpark early. “The Pittsburgh Pirates, who traditionally regard the Cubs as only a minor distraction, pulverized them in an unbelievable, record-filled shutout in Wrigley Field Tuesday,” Dozer wrote mournfully.2

Taking the mound for Chicago was Rick Reuschel, who despite a respectable 3.49 ERA entered the contest without a victory since August 21. Dueling with him was Pirates rookie John Candelaria, owner of a 7-5 record and a 2.98 ERA since earning a spot on Danny Murtaugh’s staff just before the All-Star break.

Reuschel’s work on the mound was short-lived, as Stennett willed himself back into the lineup and started the game with a screaming double down the right-field line. A parade of Bucs followed him to the plate (and around the bases); the lone batter Reuschel retired was Dave Parker — on a sacrifice fly.

By the time Stennett batted a second time in the first inning, he faced relief pitcher Tom Dettore, and singled for his second hit, scoring Frank Taveras and sending Candelaria to third. After Dettore threw a wild pitch to Richie Hebner and  Candelaria scooted across the plate, Willie Stargell singled home Stennett for the Pirates’ ninth run. Parker mercifully ended things in making his second out of the inning, grounding out to first as loud “boos” cascaded from Wrigley’s upper deck.

Dettore temporarily quelled the Pirates’ bats in the second, but the onslaught continued in the third as Stennett knocked his third hit, a single, before heading home on a long home run onto Sheffield Avenue by Hebner for an 11-0 Pittsburgh lead.

After a lone Pirate run crossed in the fourth, the Steel City attack went into high gear once again in the fifth. As the between-inning music stopped and Stennett took his place in the batter’s box, also needing relief (in addition to Marshall) was Wrigley Field organist Frank Pellico — who was replaced by Nancy Faust, normally on duty at Comiskey Park on the South Side.

Stennett drove another double into the gap, and was soon singled home by Al Oliver as Parker finally joined the fun in homering on the first pitch served up by Dettore’s replacement, Oscar Zamora.

While standing on second, Stennett was informed by umpire Dutch Rennert that he had an opportunity to set the single-game hits record; and when he returned to the plate for a second time in the fifth, Stennett added a single — matching his two-hit accomplishment from the first inning — to drive in Manny Sanguillen as the Pittsburgh domination moved out to an 18-0 count with half of the game yet to be played. In netting two hits in an inning twice in the same game, Stennett had already tied a record shared by Max Carey, Sherm Lollar, and Johnny Hodapp.

With the Wrigley Field scoreboard resembling the one at the Bears’ lakefront home of Soldier Field, bobbles by the Cubs’ defense added two more in the sixth — bringing the mind-boggling total to 20-0 as Candelaria cruised easily through the Chicago bats. A single by Stennett in the seventh inning — his sixth hit of the game — contributed to two more Pittsburgh runs, running the count to 22-0.

When Pittsburgh came to bat in the eighth, Marshall emptied the bench and inserted Champ Summers in right field with Paul Reuschel now taking the mound — seeking to quickly end the nightmarish contest his brother had started long ago. He succeeded in retiring the first two Pirates, but the third batter was the white-hot Stennett.

Stennett drove another ball to right and Summers misplayed it into a triple — making Stennett the first major leaguer since 1892 (Wilbert Robinson) to get seven hits in a nine-inning game (and more impressively, in only eight innings of play). It eclipsed the previous high for the season set by Madlock, who had gone 6-for-6 against the New York Mets at Wrigley Field on July 26 and who, in a couple of weeks, would claim his first batting title.

Removed in favor of Randolph as a pinch-runner, Stennett was given a standing ovation by the few fans remaining at Wrigley as he trotted across the field from third base to the Pirates’ dugout. “I wanted to rest him,” Murtaugh said of his desire to get Stennett and his sore ankle out of the game, “but he kept getting hits.”3 Randolph was left stranded on third, as the second Reuschel mercifully kept the Pirates off the board in the ninth as well.

The final tally stood at 22-0, with every Pittsburgh starter in the lineup — including Candelaria — hitting safely, scoring at least once, and driving in at least one run.

In addition to Stennett’s feats, other records had been smashed that day. It was the largest-ever margin of victory by shutout, topping the 21-0 score that the 1901 Tigers and the 1939 Yankees had authored. The 24 hits by the Pirates tied the National League high in 1975, matching the figure notched by the Cincinnati Reds on June 13 — which also took place against the Cubs at Wrigley. (Earlier in 1975, the Reds and Pirates had also banged out 18 hits on separate occasions against the beleaguered Chicago pitching staff — which had stood as the previous NL high for the season.)

The domination by the Pirates had been complete. “Lost in the hoopla over Stennett’s miraculous achievement,” Dozer noted, “was a dandy three-hit pitching job by the rookie Candelaria, who was withdrawn after seven innings.”4 Candelaria had reaggravated a lingering back injury, necessitating his removal. “I’ve had a bad back before,” the pitcher said. “I had it before I pitched today.”5

In their pursuit of the NL East title, the Pirates’ romp at Wrigley concluded their 1975 season series with the Cubs; they had taken 12 of 18 games from Chicago and dropped their magic number for clinching the title to 7.

What did Stennett plan for an encore, as the Pirates prepared to travel to Philadelphia for a crucial series where they were 0-7 for the year at Veterans Stadium?

“I just want to forget about today and get back to playing my kind of baseball,” he told Bob Smizik of the Pittsburgh Press — perhaps lamenting the fact that “batting holidays” against the 1975 Cubs had to come to an end sometime.6

This article appears in “Moments of Joy and Heartbreak: 66 Significant Episodes in the History of the Pittsburgh Pirates” (SABR, 2018), edited by Jorge Iber and Bill Nowlin. To read more stories from this book at the SABR Games Project, click here. It also appears in “Wrigley Field: The Friendly Confines at Clark and Addison” (SABR, 2019), edited by Gregory H. Wolf. To read more stories from this book online, click here.

In addition to the sources listed below, the author also consulted Baseball-Reference.com, Retrosheet.org, and SABR.org.