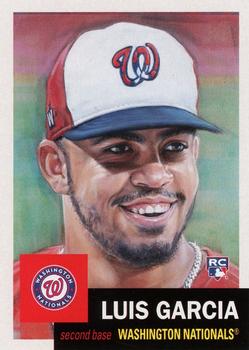 But one player’s injury is another player’s opportunity. Less than a month into the 60-game season, the Nationals’ new second baseman, Starlin Castro, broke his wrist, leaving an opening for Luis García.3 García had been expected to play in the minors in 2020,4 but with the minor-league seasons canceled, he was assigned to the Nationals’ alternative training camp in Fredericksburg, Maryland. Summoned 50 miles southeast to join the Nationals, García debuted on August 14 and performed decently as an emergency call-up. By the time the Nationals traveled to Tampa Bay for a series with the Rays in mid-September, he was batting .286 but wasn’t much of a power threat (four doubles and one home run). He had already exceeded his father’s record in the majors (Luis Rafael García had had one hit in nine at-bats for the Tigers in 19995). Given his unexpectedly early debut, it wasn’t surprising that Luis Victoriano García, at age 20, was the youngest player in the majors in 2020.

Pete Fairbanks was the opener for Tampa. The Rays had pioneered the “opener” concept, in which the starting pitcher would pitch only one or two innings, or once through the order. The second pitcher would be expected to pitch a few innings.6

This was Fairbanks’ first major-league start. His record (4-3, 3.00 ERA) was relatively meaningless as his longest outing had been 1⅓ innings.7 Fairbanks struck out Adam Eaton. Yadiel Hernández, who had debuted the previous week, came to the plate looking for his first hit. He didn’t get it – he grounded out to first.8 Although Trea Turner singled over the mound, Juan Soto struck out to end the top of the first.

The Nationals sent Austin Voth (0-5, 7.99 ERA) to the mound. His first inning did not go as well as Fairbanks’. Austin Meadows popped up to shallow left and Brandon Lowe flied out to the warning track. Voth hit Randy Arozarena with a pitch. Nate Lowe – no relation to Brandon Lowe – doubled into right, scoring Arozarena.9 Manuel Margot struck out, but the Rays had the early 1-0 lead.

With Fairbanks’ “opener” inning complete, right-hander Ryan Thompson was the first pitcher out of the Rays’ bullpen. Despite Thompson’s side-slinging delivery, Yan Gomes and Carter Kieboom hit one-out singles. The Rays switched to a lefty, Josh Fleming, who had originally been announced as following Fairbanks.10 This was only Fleming’s fifth major-league game (all starts) and he’d never entered with runners on base. He got García to ground out to first on the first pitch for the second out. Victor Robles showed a little more patience and earned a nine-pitch walk to load the bases. Eaton dropped down a bunt that rolled two-thirds of the way up the third-base line before stopping foul. The bunt earned him a look from the pitcher when he made his way to the third-base line to pick up the ball. Fleming won the battle, though, as Eaton grounded to third for an easy force play to end the inning.

Eaton’s troubles continued in the bottom of the second. Joey Wendle hit a fly to right, where Eaton made a flying catch – but when he rolled over, his glove hit the turf and the ball rolled out. Eaton recovered it in time to hold Wendle to a single. Wendle made it to second on Kevin Kiermaier’s one-out groundout but was left there when Michael Pérez flied out.

Turner was credited with a one-out hit in the top of the third. He grounded toward Wendle at third, who knocked the ball down but couldn’t corral it for a throw. Turner made it to second on Soto’s groundout, but was left there when Asdrúbal Cabrera bounced back to the pitcher.

Voth did not allow a hit in the bottom of the third. He did issue two walks (including a two-out intentional walk to Nate Lowe) but strikeouts of Meadows, Arozarena, and Margot prevented the Rays from taking advantage of the baserunners.

Fleming worked a clean top of the fourth. When the Nationals took the field in the bottom of the fourth, Josh Harrison had replaced Eaton in right. Eaton had fractured his finger on his foul bunt in the second; it turned out to be his final at-bat of the season and final appearance in four years as a National. 11

The Rays had a scoring opportunity in the fourth when Kiermaier hit a two-out triple off the top of center fielder Robles’ glove, but he was left on third when Pérez flied out to Harrison.

Fleming induced three consecutive groundouts in the top of the fifth.

Voth’s bottom of the fifth was quite similar to his bottom of the third. Brandon Lowe got on base again with a one-out double. Arozarena struck out again, Voth intentionally walked Nate Lowe again, and he got Margot out again to finish the inning (although this time with a popout rather than a strikeout).

Oliver Drake was the Rays’ choice for the fourth pitcher of the game. Soto worked a one-out walk. Cabrera’s seventh home run of the year put the Nationals on top, 2-1, so Voth was potentially in line for his first win of the year.12 The home run cleared several rows of “flat fans”13 and bounced into the vacant stands off the advertising tarp behind the “fans.” Drake got the last two outs but the Nationals had the lead.

Nationals relief pitcher Wander Suero earned a hold in the bottom of the sixth. After Wendle grounded out, Willy Adames and Kiermaier each worked the count full but struck out swinging.

Aaron Loup needed only 11 pitches to dispose of the Nationals in the top of the seventh. After García and Robles struck out, Harrison made a bid for a home run but Kiermaier caught the ball against the center field wall.

Kyle Finnegan worked himself into, and out of, trouble in the bottom of the seventh. Pérez was out on one pitch: Cabrera made a great catch on a ball that bounced over the first-base bag and started to curve foul. Meadows and Brandon Lowe singled, and Nate Lowe worked a two-out walk to load the bases. Finnegan escaped the jam by inducing Margot to ground out.

Pinch-hitter Jake Noll reached base in the top of the eighth against Ryan Sherriff, the Rays’ sixth pitcher. Third baseman Wendle lost his balance trying to field Noll’s grounder up the third-base line. Wendle wasn’t charged with an error and Noll was erased when Turner grounded into a double play: Wendle to Lowe to Lowe. Soto grounded out to end the frame with the score holding at 2-1, Nationals.

Nationals reliever Will Harris worked a quick bottom of the eighth: two strikeouts and a popout on 11 pitches.

Sherriff was even more efficient in the top of the ninth, needing only eight pitches for three outs.

The Nationals’ closer, Daniel Hudson, came in to protect the one-run lead. He didn’t succeed. He struck out pinch-hitter Mike Brosseau and got Meadows to fly out, bringing up Brandon Lowe. Hudson shook off Gomes’ suggested pitches several times. Perhaps he should have thrown what Gomes was calling – Lowe hit the sixth pitch onto the same advertising tarp as Cabrera’s homer in the top of the sixth, tying the game, 2-2. Hudson struck out Yoshi Tsutsugo,14 but the damage had been done.

The game went to extra innings. Both the Nationals (2-1) and the Rays (4-2) had winning records in extra-inning games for the season. As usual in 2020, the player who had made the last out of the previous inning was placed on second base to start the extra inning. For the Nationals, that was Kieboom, who had grounded out to end the ninth.

Nick Anderson was the seventh pitcher of the game for the Rays. He had pitched in the Rays’ win the previous night, but had thrown only seven pitches. The Rays also replaced their catcher, substituting Kevan Smith.

García wasted no time at the plate: He hit Anderson’s first pitch over the stands in right for a two-run leadoff homer, giving the Nationals a 4-2 lead. This was García’s second (and final) home run of his debut season. Anderson struck out the next three Nationals to end the frame.

Since Hudson had already thrown 18 pitches in the ninth, Nationals manager Davey Martinez called on Kyle McGowin to close out the game. He succeeded, striking out all three Rays he faced.

The Rays went on to win the AL pennant but lost to the Dodgers in the World Series, four games to two. The Nationals closed out their 2020 abbreviated season with their first losing record (26-34) since 2011. At least in this game they witnessed some history, as a home run from an unexpected source earned them a win.

1 Joe Ross and Ryan Zimmerman both opted not to play in 2020. Due to the pandemic, players could opt out of playing in 2020 without retiring or being deemed to have breached their contracts.

4 He had spent the 2019 season with the Harrisburg Senators, the Nationals’s Double-A affiliate.

5 His father played in the minors for the Tigers, Cardinals, and Pirates 1993 through 2002, but spent less than one month in the majors.

7 In his 22 previous 2020 appearances, he typically pitched one of the middle innings, earning six holds along with four wins, three losses, and three blown saves. His ERA had been steadily decreasing since a couple of bad outings in early August.

8 He got his first hit in his next game, on September 20.

11 Mark Zuckerman, “Eaton Placed on IL with Fractured Finger,” masn.com, September 17, 2020. https://www.masnsports.com/nationals-pastime/2020/09/eaton-placed-on-il-with-fractured-finger.html. Retrieved April 11, 2021. The Nationals did not pick up his 2021 option and he re-signed with the White Sox in the offseason.

12 Although he did not get a win in this game, he earned two wins before the end of the season.

13 During the 2020 season, most major-league teams created laminated plastic “fans” to occupy the otherwise-empty ballpark seats. Fans provided photos of themselves, their relatives, or their pets. The cost was often donated to the team’s charitable arm. Some teams (i.e., Washington Nationals) installed photos of the players’ families near the home dugout. See, e.g., Bill Shaikin, “Dodgers Sell Seats Outfitted with Cutouts of Fans’ Faces,” latimes.com, July 14, 2020. latimes.com/sports/dodgers/story/2020-07-14/dodgers-sell-seats-outfitted-with-cutouts-of-fans-faces. Accessed April 11, 2021.

14 Tsutsugo pinch-hit in the seventh and stayed in to play left field.