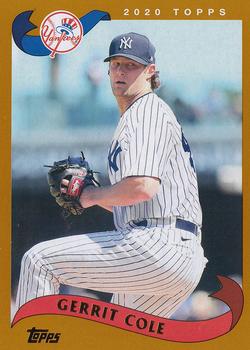 Heading into their September 16 game with the Toronto Blue Jays, the New York Yankees (27-21) were second in the American League East in the pandemic-abbreviated 2020 season, four games behind the Tampa Bay Rays. With only 12 games remaining, their chances of catching Tampa Bay for the division title were slim.

But an expanded postseason tournament, with eight teams from each league qualifying, meant that the Yankees were almost certain to continue past the 60-game regular season. They could reach the playoffs by finishing second in the AL East, and they were a half-game ahead of the third-place Blue Jays, whom they had beaten 20-6 on a six-homer attack a night earlier. Even if Toronto caught them, the Yankees were also several games ahead of the competition for one of two at-large spots.

New York starter Gerrit Cole (5-3, 3.20 ERA) was approaching a personal milestone, eight days after his 30th birthday. In his previous start, a shutout of the Baltimore Orioles on September 11, he had won the 99th game of his eight-season major-league career. Two dominant seasons with the Houston Astros1 had netted Cole a nine-year, $324 million free-agent contract with the Yankees in December 2019, making him the highest-paid pitcher in major-league history.2

This was Cole’s third consecutive start with Kyle Higashioka, the Yankees backup catcher, behind the plate. Cole and Higashioka’s relationship went way back – to their high-school days. Cole and Higashioka had been members of a Los Angeles Angels scout team in Orange County.3 In 2008, when they were seniors, the Yankees had drafted both: Cole in the first round and Higashioka in the seventh. Higashioka signed with New York and worked his way through the farm system, but Cole went to college at UCLA, then was selected first overall in the 2011 draft by the Pittsburgh Pirates. Cole and Higashioka were reunited as professional teammates in 2020. Their reunion had been a productive one – Cole’s ERA in 20 innings with Higashioka catching was 0.90 compared with a 3.91 ERA in 46 innings when paired with Gary Sánchez.4

Against the Blue Jays, Cole found his strikeout groove right away. Cavan Biggio was the first to step in. Three pitches and he was out on a foul tip. After Bo Bichette lined out to deep left, Travis Shaw was another three-pitch strikeout victim.

The Blue Jays’ Tanner Roark (2-1, 5.60 ERA), a winter 2019-2020 free-agent signing, was having trouble replicating the success he’d had earlier in his career with the Washington Nationals.5 On this night, D.J. LeMahieu hit a leadoff home run into the front row of the vacant seats in right, clearing Biggio’s leap at the wall.6 Roark got out of the inning without further damage, including striking out Aaron Judge, who was returning from the injured list and in action for only the second time since August 11.

Cole needed only nine pitches to get his three outs in the second. Roark matched Cole in the home half on just eight pitches.

Danny Jansen’s third-inning walk was the first baserunner against Cole, who opened and closed the scoreless inning with strikeouts.

The Yankees gave Cole some breathing room in the third. Tyler Wade led off with a single off the glove of first baseman Vladimir Guerrero Jr. Higashioka hit Roark’s next pitch 428 feet to center for his third home run of the season, giving the Yankees a 3-0 lead.

Cole pitched another efficient inning in the top of the fourth: Bichette, Shaw, and Randal Grichuk each popped up on the fourth pitch of his at-bat.

In the bottom of the fourth inning, it looked as if the Bronx Bombers of the 1970s had finally returned to town. Clint Frazier opened with a home run into the tarped seats in left, about 10 rows in. After designated hitter Sánchez singled, Wade and Higashioka also bid for home runs, but theirs were caught in deep left. LeMaheiu also succeeded – his home run landed among the right-field seats and bounced up toward the concourse. The Yankees had a commanding 6-0 lead.

Guerrero, Lourdes Gurriel Jr., and Joe Panik managed nothing against Cole in the top of the fifth.

Roark7 was replaced by Jacob Waguespack8 in the fifth. Frazier’s two-out single drove in Aaron Hicks for a 7-0 lead – which turned out to be the only Yankees run of the game not scored on a home run.

The Blue Jays finally got on the board in the sixth. Jonathan Villar ended Cole’s bid for a no-hitter by doubling down the right-field line. Jansen’s fly out and Cole’s wild pitch with Bichette at the plate got the run home.

Higashioka answered in the bottom of the sixth with his second home run – this time into the left-field stands. After LeMahieu hit a one-out double, Judge, who had struck out in all three previous at-bats, finally made contact, but grounded out to third. But Hicks walked, and Luke Voit put the Yankees in double digits at 11-1 with his major-league-leading 19th home run. The Yankees had six home runs in a game for the second night in a row – a first in franchise history.9

Cole was still on the mound in the seventh, and Grichuk and Guerrero started the inning with back-to-back singles. With Grichuk on second, Cole and Higashioka went to their alternate signs to limit the possibility of a stolen sign. But they got crossed up,10 and Cole’s pitch hit home-plate umpire John Tumpane straight in the mask.

Cole immediately looked in his cap (according to the Yankees TV announcers, he was rechecking his signs) while Higashioka and the trainer attended to Tumpane, Tumpane was able to stay in the game. Cole spoke with Tumpane after the inning, presumably apologizing. Cole finished his outing with a flourish, striking out Gurriel, Panik, and Villar for an eight-strikeout game.

Toronto’s Héctor Pérez made his major-league pitching debut11 in the bottom of the seventh. With two outs, he walked Wade, so when Higashioka hit his third home run of the night it added two more to the Yankees’ tally.

Higashioka couldn’t help grinning as he ran the bases – he had hit two home runs in a major-league game before,12 but never three. With his .188 batting average, the Yankees were playing him to work with Cole, and the sudden flare of offense was a bonus.13 With no fans in the stands, there was no one to summon him for a curtain call, but the stadium announcer saluted him by turning on the prerecorded cheering.

Yankees manager Aaron Boone turned the 13-1 lead over to Jonathan Loáisiga, just returned from the injured list, in the eighth. Loáisiga put two on by plunking new right fielder Jonathan Davis and allowing a one-out single to new shortstop Santiago Espinal. But he got Shaw and Grichuk to fly out to keep the Blue Jays off the scoreboard again.

The Yankees loaded the bases with two outs in the bottom of the eighth against Pérez with two singles and a walk. Toronto manager Charlie Montoyo rescued his rookie, substituting Anthony Bass. Bass got the last out on one pitch – Sánchez grounded out.

The highlight of the top of the ninth was Panik’s two-out solo home run off Nick Nelson. Panik, who had grown up in the New York area and played college baseball at St. John’s in Queens, was playing his first series at Yankee Stadium. The game finished with Villar’s groundout to first. The flip to Nelson covering first beat the sliding Villar – but Montoyo challenged the play. The out call was upheld and the game really ended, putting Cole’s 100th career win in the books.

Both teams made it to the expanded playoffs, with New York finishing second and Toronto third in the AL East. Toronto lost to Tampa Bay in the opening wild-card Series. The Yankees won their wild-card Series but lost to Tampa Bay in the Division Series. Higashioka caught all three of Cole’s postseason starts, and Cole was fourth in the AL Cy Young Award voting, the fourth top-five Cy Young finish of his career.

In addition to the sources cited in the Notes, the author consulted Baseball-Reference.com and Retrosheet.org for pertinent information, including the box score and play-by-play. She also viewed the recorded game on MLB.tv (Yankees broadcast).

6 Due to the COVID-19 pandemic, no fans were allowed in the stands during the regular 2020 season. Some teams installed “flat fans” to break up the monotony. The Yankees did not – they tarped over some of the lower seats and left the rest empty. The only people in the stands were two ballboys who retrieved foul balls down the lines.

11 As of the beginning of the 2022 season, this was Pérez’s only major-league appearance, although he spent 2021 in the Cincinnati minor-league system. He did get to keep the ball from his first pitch.