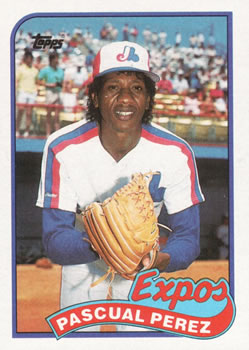 Bill Mazeroski’s Baseball yearbook gave a blunt assessment of the Montreal Expos’ chances for the 1987 season: “If they think they can win with these imposters, they’ve got another think coming.”1 Sports Illustrated had more tact in its season preview, although it predicted that the Expos would lose 98 games and finish dead last in the NL East. It was easy to understand all the pessimism that spring. After finishing 29½ games behind the New York Mets in 1986, Montreal lost Andre Dawson to free agency, traded away All-Star closer Jeff Reardon in a cost-cutting move, and hadn’t yet re-signed Tim Raines. To top things off, Montreal’s once-proud farm system was barren.

In dire need of starting pitching and lacking the resources for splashy free-agent signings, the Expos cast a wide net in search of veteran pitching talent that other clubs might have overlooked. A motley crew of pitching castoffs was invited to spring training in hopes of finding a diamond in the rough. Montreal found one in Pascual Pérez.

Before signing a free-agent contract with the Expos, the 30-year-old Dominican had spent four turbulent years in Atlanta. His misadventures began in August of 1982 when he got lost driving to the ballpark for one of his starts, arriving 10 minutes after the game had started.2 In January of 1984, Pérez was arrested for possession of half a gram of cocaine in the Dominican Republic, spent a couple of months in jail, and missed the first month of the regular season.3 He had some success with the Braves, making the 1983 All-Star team and winning a combined 29 games over the 1983-84 seasons before battling shoulder problems for most of 1985 and posting a dismal 1-13 record with a 6.14 ERA. More troubling than his injury woes were his two unexcused absences during the season and the substance-abuse rumors. The Braves released him at the end of spring training in 1986, and when no other team offered him a contract, he was forced to sit out the entire season.

After a stint in extended spring training, the Expos assigned Pérez to their Triple-A club in Indianapolis in May of 1987. Meanwhile, Montreal was languishing in fifth place with an 8-13 record without Raines. The team’s fortunes improved significantly when Raines re-signed on May 1, and he made his season debut the next day at Shea Stadium in what is known simply as “The Tim Raines Game.” Despite having missed spring training and the first month of the season, the future Hall of Famer destroyed the Mets by going 4-for-5 with a stolen base and a 10th-inning grand slam. Not only did the return of Raines kickstart the Expos’ season, but it sent the defending World Series champions into a 2-9 tailspin that pushed them 4½ games out of first place.

When the two teams met on September 17, the Mets had pulled to within 1½ games of the first-place Cardinals, while the Expos sat in third place with a surprising 81-63 record, four games back of St. Louis. Montreal sent Pérez (3-0, 2.29 ERA) to the hill for his sixth start since being recalled in late August. Pérez had earned the promotion by making the American Association All-Star team, leading the high-scoring circuit with a “low” 3.79 ERA, and most importantly, staying out of trouble.

Pérez was one of the most flamboyant ballplayers in the 1980s, and while the home fans loved his shtick, he had a knack for annoying his opponents. One of his signature moves was shooting finger guns at batters and blowing away imaginary smoke after striking them out. A routine called strike might result in a fist pump and a classic Pérez gyration. Using an exceedingly high leg kick, he tossed a wide variety of pitches, including an occasional “Pascual ball,” a slow, arcing eephus pitch that befuddled hitters.4 Even his pickoff move was outrageous. Pérez would check runners at first by peering between his legs and occasionally throw over to first between them. After retiring the side, he sprinted off the mound so fast that he could be in the dugout before a high fly ball was caught for the third out.

The Mets’ starting pitcher, 24-year-old David Cone, was far more conventional than the free-spirited Pérez. Cone, making his 12th major-league start, came into the game with a 5-3 record and 3.78 ERA. The young right-hander had been acquired from Kansas City near the end of spring training in what is generally regarded as the worst trade in Royals history (as of the end of the 2019 season).5 Although he had pitched only in relief for Kansas City, the Mets needed a starter early in the season with Dwight Gooden in a drug rehabilitation center and Bob Ojeda out with an elbow injury, and Cone took full advantage of the opportunity.

Pérez got off to a slow start in the top of the first inning. The lanky right-hander issued a one-out walk to Howard Johnson and a single to Keith Hernandez before Darryl Strawberry opened the scoring with an RBI single. The Mets, featuring the National League’s top offense, looked to be on the verge of a big inning with runners on second and third, just one out, and the dangerous Kevin McReynolds coming to the plate. McReynolds hit a chopper down the third-base line that Pérez barehanded and fired home as he crossed the foul line, and catcher Mike Fitzgerald tagged Hernandez for a huge out.6 Pérez escaped the jam by retiring the next batter, former Expo Gary Carter, on a lineout to second baseman Tom Foley.

After Raines grounded out to start the bottom of the first inning, Cone hit Mitch Webster with a pitch. Expos shortstop Hubie Brooks followed with a double into the left-field corner that scored the speedy Webster and promptly tied the game.

Pérez and Cone settled into a pitching duel, with both hurlers facing only one batter over the minimum between the second and fifth innings. Pérez was at his best in a one-two-three top of the sixth inning in which he struck out Johnson, Hernandez, and Strawberry, the heart of the Mets order.

Pérez’s dominant inning seemed to fire up the Expos in the bottom of the sixth. Webster led off with a walk, and the red-hot Brooks followed with a two-run home run off Cone to put Montreal up 3-1. The blast gave Brooks 11 RBIs in 15 games.

The Expos added another run in the bottom of the eighth when Jesse Orosco hit Fitzgerald with a pitch with the bases loaded. Pérez put an exclamation mark on the 4-1 victory by tossing a one-two-three ninth, his sixth such inning in the game. He set down 24 of the last 26 batters he faced and held the Mets to one earned run on four hits, a walk, and eight strikeouts.

The win moved the Expos to within three games of the Cardinals and 1½ games back of the Mets with 17 to play. “If we lost this one, we probably could have kissed our pennant hopes goodbye,” declared Expos manager Buck Rodgers.7 Pérez, responsible for four of the team’s previous nine victories, was the biggest reason why Montreal was still in the race. “This year’s been the best year in my life,” he said.8 “I know everybody here is behind me.” Pérez was right about that. Unlike some of his other managers, the easygoing Rodgers embraced Pérez’s exuberance on the mound, and the results were better than anyone could have hoped for.9

Pérez went on to win all seven of his September starts, finishing the season with a sizzling 7-0 record and a 2.30 ERA. Another reclamation project, 33-year-old Dennis Martínez, also paid significant dividends for Montreal. The former alcoholic with a history of shoulder problems was called up from Indianapolis on June 10 and he posted a stellar 11-4 record and a 3.30 ERA. Against the odds, both Pérez and Martínez excelled with the Expos, becoming their two most valuable starters in 1987.

Neither the Expos nor the Mets could catch the Cardinals down the stretch, although both teams stayed in the race until the final week of the season. The Expos finished the year with a 91-71 record, giving them 27 more wins than were predicted by the experts at Sports Illustrated. Not bad for a bunch of “imposters.”

2 Pérez had earned his driver’s license earlier that day and was driving to Atlanta-Fulton County Stadium for the first time. He circled Interstate 285, a beltway surrounding the city, three times before finally arriving at the ballpark more than three hours later. The trip normally took about 30 minutes. Pérez stopped to ask for directions three times, but he struggled to understand the instructions due to his limited English-language skills. The episode earned him nicknames such as “Perimeter-Pérez,” “I-285,” and “Wrong-Way Pérez.”

5 David Cone, along with Chris Jelic, was traded from the Kansas City Royals to the New York Mets for Ed Hearn, Mauro Gozzo and Rick Anderson on March 27, 1987. The Royals had plenty of pitching and they needed a catcher, so they effectively swapped their top pitching prospect for Hearn, who appeared in only 13 major-league games after the trade.

9 Buck Rodgers earned the National League’s Manager of the Year Award in 1987.