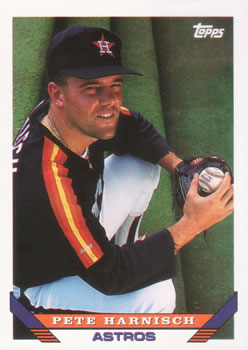 “It was a tough play I needed to make, and I didn’t make it” — Pete Harnisch 1

Somewhere around the fifth inning of a potential no-hitter, the whispers begin in the stands. Nobody uses the dreaded “no-hitter” term for fear of jinxing the pitcher. All anyone might say is that things are starting to get interesting. People aren’t as quick to leave their seats for the refreshment stands in case they miss something.

On September 17, 1993, the San Diego Padres visited the Astrodome to play the opening game of their series with the homestanding Astros. Twenty-six-year-old Pete Harnisch (14-8, 3.23 ERA, including three shutouts) toed the rubber for Houston and was opposed by Andy Benes (15-12, 3.57 ERA). San Diego’s none-too-potent offense was even further diminished as star hitter Tony Gwynn was on the shelf for the season. He had suffered a knee injury against Atlanta on September 5, and went to the disabled list with a .358 batting average, which placed him second in the league for the season.

The Astrodome was known as a pitchers’ park and this Houston team boasted some outstanding arms. During the previous homestand, Darryl Kile had thrown a no-hitter, the ninth in franchise history, against the Mets on September 8. Over the course of the season, each starter in the Astros’ rotation had recorded at least one shutout.

Each pitcher was on his game and the scoreboard had nothing but zeros through five innings. By that point Benes had yielded two hits while Harnisch had yielded none, with only two runners having reached base against him. He had walked Dave Staton in the second inning and had hit Phil Plantier with a pitch in the fourth. In the field, only two defensive plays were the least bit out of the ordinary. Second baseman Craig Biggio neatly pocketed a groundball by Jarvis Brown to end the third inning, and one inning later shortstop Andujar Cedeno moved swiftly to his left to grab Ricky Gutierrez’s groundball, after it had been deflected by Harnisch, and nail him at first with an off-balance throw.

In the top half of the sixth inning, Benes led off for San Diego and struck out swinging. The next batter was the speedy leadoff hitter Jarvis Brown, who had flied out and grounded out his first two at-bats. He laid down a bunt that rolled slowly and came to a stop midway between the mound and home plate. In fielding the bunt, Harnisch lost his footing and his low, wide throw skipped under the glove of first baseman Chris Donnels. Donnels said, “I saw the throw go behind [Brown] and I tried [unsuccessfully] to reach through him and pick it up.”2 Official scorer John Wilson, after deliberating for 30 seemingly endless seconds and viewing the videotape, ruled it a hit, much to the dismay of the 29,595 amateur scorekeepers in the stands.

Wilson felt it was a pretty cut-and-dried decision. “He had to pick it up with his bare hand and throw off-balance. It’s a play that’s called a hit 99 percent or more of the time in normal circumstances.”3 After the game, Wilson said, “I’m giving no consideration to changing the call. All scorers hope that the first hit is a clean one. But in the world we live in, that’s not the way it is.”4

Brown added, “I didn’t think they’d give me a hit. But I thought it was. I just laid it down. I didn’t bunt it as far as I wanted to, but in a place where the pitcher and catcher had to go for it.”5

Benes pitched a 1-2-3 bottom of the sixth inning. When Harnisch matched him in the top of the seventh there was a growing tide of grumbling that Wilson had erred in awarding Brown a hit in the prior inning. The angriest of the grumbles came from Astros pitcher Mark Portugal who groused, “Our official scorer needs to take a tour of major-league stadiums and see how it’s done.”6

Benes returned to the mound for the seventh inning and things got really messy really quickly. Singles by Steve Finley and Luis Gonzalez set the table for Ken Caminiti, and the Astros third baseman doubled to drive in the first run of the game. With runners on second and third, Benes gave an intentional pass to Kevin Bass, loading the bases. They weren’t loaded for long. A two-run double by Donnels plated two runs and made the score 3-0. Benes was finished. Mark Davis entered the game for the Padres and there was no further scoring. The last outs of the inning came when Harnisch hit into a double play, but he would not need any more runs anyway.

Harnisch kept rolling along, retiring the side in order in each of the last two innings to record his fifth consecutive win and improve his season’s record to 15-8. He made fast work of the Padres, needing only 107 pitches, 67 of which were strikes, and the fans were sent into the night air after only 2 hours and 6 minutes in the air-conditioned dome. The whitewash lowered Harnisch’s ERA to 3.09, and it was his fourth and final shutout of the season, enough to lead the National League. His final 2.98 ERA was sixth-best in the league. He became the third Astros pitcher to reach the 15-win plateau in 1993 – Mark Portugal (15-4) and Darryl Kile (15-6) were the others – the first time in the 32-year history of the Houston franchise that had happened.7 Harnisch finished with a 16-9 record.

Houston manager Art Howe summed it up. “It was all Harnisch tonight.”8 Harnisch, for his part, felt strong all night. “My fastball was maybe as good as it has been – not velocity-wise, but I spotted it really well.” His catcher, Ed Taubensee, concurred. “He was remarkable. He pitched inside tremendously.”9

It was Harnisch’s second one-hitter of the season, and the 21st in the history of the Houston franchise. He had hurled a 4-0, one-hit shutout against the Cubs on July 10 at Chicago. Harnisch would never get that elusive no-hitter. The closest he would come after that Friday night in Houston was six seasons later, on August 19, 1999. He was with Cincinnati then and took a no-hitter into the seventh inning against the Pirates, only to have it broken up by Pittsburgh’s Mike Benjamin. It was the only hit he allowed before leaving the game after eight innings. As with the game in Houston, runs were tough to come by. It wasn’t until the bottom of the eighth inning that the Reds got their only run of the game, via a Sean Casey homer. Reds reliever Scott Williamson made the run stand up and Harnisch was credited with the 1-0 win. That was also the last season in which he reached double-digits in wins, tying the career high of 16 that he had established in 1993.

Despite Harnisch’s victory the Astros were in third place, 17½ games out of the division lead. It wasn’t a bad team, but they had the misfortune of being in the same division as Atlanta and San Francisco, two teams that would win more than 100 games that season. The Astros’ third-place finish spelled the end of Howe’s five years as manager of the Astros.

The Padres were a much worse picture of futility. It was the second time they had been victimized by a one-hitter in two weeks. Three Braves pitchers had held them to one hit, which came with two outs in the eighth inning, in a 1-0, 10-inning Atlanta win on September 9. San Diego switched general managers in June, and no fewer than 46 players were on the roster at one time or another. After the loss on September 17, they were in last place in the seven-team NL West, 38 games out of first place. A greater embarrassment was that they trailed the expansion Colorado Rockies in the standings. They finished the season 61-101, six games behind the Rockies.

Tony Gwynn returned the next season and reeled off the first of four consecutive batting championships. He helped lead Padres from the ashes as they won division titles in 1996 and 1998.

Pete Harnisch remained in the majors through 2001 and posted a career record of 111-103, but there were few experiences that came close to matching that evening in 1993.

Astros right-hander Pete Harnisch was 16-9 with a 2.98 ERA in 1993. On September 17, he lost a no-hitter on a controversial call and settled for a one-hit, 3-0 shutout against San Diego. (Courtesy of Houston Astros Baseball Club)

In addition to the sources included in the end notes, the author used Baseball-Reference.com and Retrosheet.org.