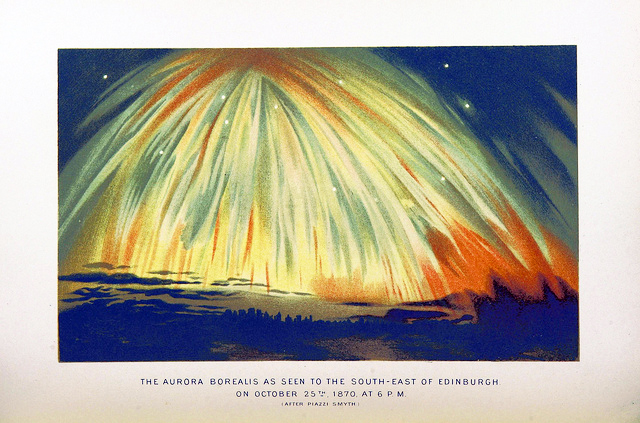 It was a game that would have fascinated Hubble. Not James Hubble, the 24-year-old pitcher who played one season of professional baseball, for the St. Cloud Rox in the Northern League in 1957. He went 2-5, winding up his career with nine games started, 35 games pitched, 102 innings pitched, a 6.00 ERA, 84 strikeouts, and 7 hit batters. The other Hubble. Edwin Powell Hubble — the American astronomer for whom the Hubble Space Telescope is named, orbiting about 340 miles above Earth to unlock the mysteries of the cosmos.1

On September 18, 1941, a space oddity, beautiful bordering on hypnotic, interfered with the radio broadcast of a game between the Pirates and the Dodgers — aurora borealis, also known as the northern lights. It is not a phenomenon limited to Earth, which has an 11-year cycle for the optimum display of colors illuminating the sky — pink, green, yellow, blue, violet, orange, and white. The lights manifest because of a chain reaction on the sun resulting in sunspots. “The sun’s many magnetic fields distort and twist as our parent star rotates on its axis,” explains space.com. “When these fields become knotted together, they burst and create so-called sunspots. Usually, these sunspots occur in pairs; the largest can be several times the size of Earth’s diameter.”2

During the WOR broadcast of the afternoon Pirates-Dodgers game, the northern lights stopped the radio waves from reaching Brooklynites tuned to Red Barber accounting of the game. During the 15-minute void, the Pirates scored four times. Playing on their home turf at Forbes Field, the sons of Steel City protected their 4-0 lead until the eighth inning, when the Dodgers crossed the plate five times. In the bottom of the eighth, the Pirates scored two runs. Final score: 6-5, Pirates.

The victory was, according to Dodgers skipper Leo Durocher, stained with controversy. It began when reliever Luke Hamlin gave up what looked like a single to Vince DiMaggio; left fielder Ducky Medwick couldn’t find a grip on the ball, so the brother of Dom and Joe went to second base on the error. A fly out gave him the opportunity to speed toward third base.

Hugh Casey got the call to be the next Brooklyn hurler with DiMaggio 90 feet away from scoring. Umpire George Magerkurth gave DiMaggio a home plate passport when Al Lopez retreated from the batter’s box, allowing Casey to “let his hands fall,” wrote Brooklyn Eagle sportswriter Tommy Holmes.4 Durocher, in turn, exploded, “How in hell can a pitcher make a balk when the batter is out of a batter’s box?”5 Holmes revealed that the batter’s box maneuver was a “pet Pirate trick,” citing a Pittsburgh scribe quoting DiMaggio as his source.

Durocher’s protest, loud enough to be heard from Northview Heights to New Homestead, triggered expulsion from the field.

Brooklyn’s loss was one of 54 in 1941. For the first time in more than 20 years, the Dodgers went to the World Series, losing to the Yankees in five games. Pitching was the team’s linchpin. Whit Wyatt, and Curt Davis combined for 57 wins and 26 losses. Casey, a favored closer for Durocher, went 14-11.

It was Durocher’s third season at the helm. In eight years with Brooklyn, Durocher had one losing season; the Dodgers went 63-91 in 1943. His combativeness, success, and dedication earned the loyalty of Brooklyn’s baseball fans. This relationship took a 180-degree turn when Durocher went to the rival Giants in 1948. In the 1960s, he returned to the Dodgers organization as an adviser. Durocher’s managerial duties re-emerged with the Chicago Cubs from 1966-1971 and a little more than half of the 1972 season. A stint with Houston followed—31 games in 1972 and the entire 1973 season.

“The Aurora Borealis as seen to the south-east of Edinburgh on October 25, 1870, at 6 P.M.” in Robert Brown, Our Earth and its Story: A Popular Treatise on Physical Geography (1893), The British Library, Flickr.com.

1 “What Is the Hubble Space Telescope?,” NASA, http://nasa.gov/audience/forstudents/5-8/features/nasa-knows/what-is-the-hubble-space-telecope-58.html, April 28, 2009.