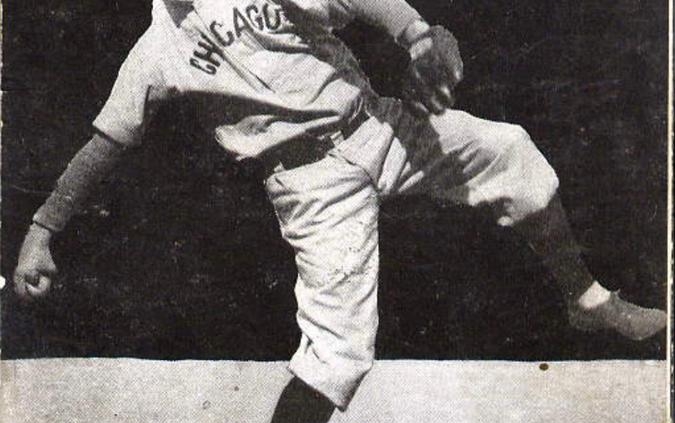 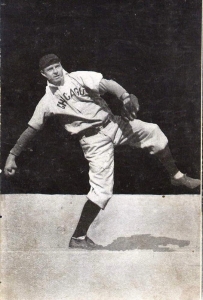 The Chicago Whales were in a three-way battle for the Federal League title during the second half of September 1915, when one of their victories involved a triple play involving their improbable rookie first baseman, Joe Weiss. Before one of the largest home crowds of the season, the Whales defeated the Buffalo Blues in a doubleheader on September 19 to remain in contention.

Chicago manager Joe Tinker started Weiss at first base in the first game in only his 14th major-league game. Weiss’s unlikely rise to the majors had come through an unusual set of circumstances. He had gained attention from Tinker after he entered a competition to identify the top three amateur players in Chicago in a contest sponsored by the Chicago Tribune. He went to the first tryout in Weeghman Park, which Tinker attended. Weiss was actually barred from the competition because of his age and because he had previously played professionally (one minor-league season with Green Bay in 1914). But Tinker liked him well enough that he later arranged to see him play in an amateur game.1

Tinker had been displeased with first baseman Fred Beck’s recent showings. When he began getting good reports on Weiss’s play in local semipro games, he decided to bring him in for several days of work with the Whales. Tinker was impressed with his performance at bat and in the field. Well-respected former player Jimmy Ryan said Weiss was the best-looking fielder he had seen in years. Tinker decided he would use the 21-year-old Weiss in one of the games of a doubleheader on August 29 and said he would likely keep him on the roster if he had a good showing. 2 Weiss stuck with the team.

The doubleheader was played at Weeghman Park, which had been built by owner Charles Weeghman specifically for his Federal League entry. (The ballpark was eventually renamed Wrigley Field in 1927, after William Wrigley became the owner of the Cubs.) The Whales said the crowd was the largest of the season, exceeding 17,000 in a park that had over 18,000 seats.3

Chicago was part of a crowded field of contenders for the league’s lead. The Whales were in third place, 3½ games behind league leader Pittsburgh and only a half-game behind second-place St. Louis. Only five games separated Newark, Kansas City, and Buffalo from Chicago.

The Buffalo Blues came into the game with a 20-5 record since August 18. Despite this spectacular run, the team wasn’t able to change its position (sixth place) in the standings, although the Blues did cut their deficit from 14½ games to 8½. It was indicative of how tight the race had become.

The Blues were on their third manager of season, Harry Lord, who had been preceded by George Schlafly (41 games) and Walter Blair (two games). Lord also played in 92 games at third base for the Blues.

In the first game of the doubleheader, Tinker started 38-year-old pitcher Mordecai Brown, while Lord countered with spitballer Fred Anderson.

The Whales scored a run in the bottom of the first inning when Max Flack walked, stole second, and came home on Dutch Zwilling’s single to left.

In the second inning Buffalo’s Baldy Louden reached base on an error by pitcher Brown. A single by Clyde Engle put runners at first and second. After Roxey Roach failed twice to move the runners up with a sacrifice bunt, he decided to hit away. He hit a liner over first base that normally would have been good for a double. However, first baseman Weiss stabbed the ball and stepped on first for a double play. Weiss saw that Louden was off second base, headed for third, and lobbed the ball to second baseman Rollie Zeider, who stepped on second to complete the triple play. The Chicago Tribune reported that the crowd cheered the rare play for five minutes.

In the Blues’ third inning, Blair singled. With two outs Lord doubled, advancing Blair to third base. Solly Hofman’s single to right scored Blair, but Whales right fielder Flack cut down Lord trying to score. In the bottom of the inning, Zeider walked and scored on singles by Flack and Zwilling, making the score 2-1.

Brown helped his own cause with a double in the fifth inning. After advancing to third on Zeider’s out, Brown scored on Flack’s second hit, for a 3-1 lead. That was the final score.

After yielding three hits in the third inning, Brown had an easy time with the Blues lineup. He finished with a nine-hit, one-run complete game for his 16th win of the season. He struck out one without issuing a walk.

Anderson took the loss, giving up six hits, two walks, and three earned runs in six innings. He struck out four. Al Schulz held the Whales scoreless in the seventh and eighth innings while striking out three. He also pitched the second game of the doubleheader, won by Chicago, 3-0.

Weiss contributed to the Whales’ shutout win in the second game with an RBI single. He played in 29 games in 1915, his only major-league season.  He played with Class-D minor-league teams in 1916 and 1921.

By winning both games of the doubleheader, Chicago climbed to second place.

The 1915 season eventually boiled down to a three-way race between Chicago, St. Louis, and Pittsburgh. On the last day of the season, Chicago split a doubleheader with Pittsburgh, while St. Louis defeated Kansas City.

The Whales finished in a virtual tie for first place with St. Louis, but won the pennant based on their won-lost percentage, which was .001 better than the Terriers’ percentage. Pittsburgh finished a half-game back.

The Federal League challenged the American League and National League to a postseason playoff to decide a world champion, but the challenge was rejected. By then, the rumors of a settlement by Organized Baseball with the Feds were prevalent, and Organized Baseball didn’t want to lend any credence to the “outlaw” league.4

As part of the dissolution of the Federal League at the end of the 1915 season, Weeghman was allowed to buy the Chicago Cubs. He maintained ownership until he sold the remainder of his shares to Wrigley in 1918.

Part of the agreement reached between the Federal League and Organized Baseball included amnesty for players who had jumped to the Federal League. The major-league teams were able to negotiate with and re-sign former players. 5 A number of Whales players went on to play for the Cubs in 1916 including Zeider, Flack, Hofman, Zwilling, Art Wilson, Mickey Doolin, Jimmy Lavender, Les Mann, and George McConnell. Tinker became the manager of the Cubs in his final season before retiring.