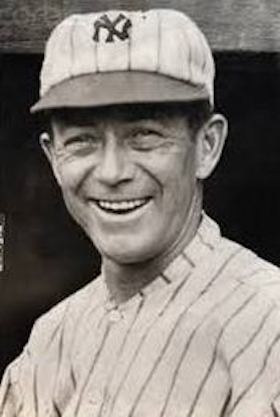 The defending world champion Cleveland Indians and the New York Yankees had been in a fierce pennant race all year long in 1921. On the morning of September 19, with less than two weeks left in the season, the teams were in a virtual tie for first place, as the Yankees hosted the Detroit Tigers for the second game of a three-game set at the Polo Grounds.1 They had Carl Mays going for his 26th win, and with the Indians idle on this day, their chances of moving ahead looked good.

But this day’s game would threaten both the Yankees’ first American League pennant and the career of their manager, Miller Huggins.

The 1921 season had been a harrowing one for Huggins, a nervous and introspective man. Sportswriter Hugh Fullerton wrote of him that summer, “He is a crabby little man, who knows about as much baseball as there is to be known, a superior sort of fellow who does not mix well, either with fans or players.”2 Beleaguered by the hostile New York City press and even undermined by a faction of headstrong players in his own clubhouse, led by Babe Ruth, Huggins looked far older than his 43 years.

Many of the attacks were harsh. Late in the 1920 season, a New York Globe headline shouted, “Huggins’s Judgment Suicidal to Yankees.”3 In July 1921 Fullerton wrote that “experts” felt that Huggins was an uninspiring “wet blanket.”4 The morning of this game, George Daley said that Huggins had “little personal magnetism and consequently is lacking in welding [sic] power.”5

Even Yankees co-owner Tillinghast “Til” Huston, who never wanted Huggins hired in the first place and tried to have him replaced after the 1920 season, continued to meddle and undercut the manager’s authority.6 The club’s other owner, Jacob Ruppert, had prevailed over Huston in re-signing Huggins for 1921.

Carl Mays was a lightning rod of controversy. His aloof and even surly personality earned him few friends. Yankees business manager Ed Barrow called him “a chronic malcontent.”7 Mays had been described as “a person with a permanent toothache.”8 When he threw the pitch that fractured the skull of beloved Indians shortstop Ray Chapman on August 16, 1920, resulting in Chapman’s death the next day, Mays’s reputation as a “headhunter” was intensified. Barrow later wrote in his autobiography, “Mays was a peculiar fellow, moody and irascible and not very popular with his teammates, but he could pitch.”9

The Yankees’ chances on September 19 looked good when they took a 4-0 lead after three innings. When Detroit player-manager Ty Cobb lifted his starting pitcher, Red Oldham, for pinch-hitter Chick Shorten in the fourth, Howard Ehmke took over on the mound.10 There was surprise in the press box that Cobb might be wasting the next day’s starter (Ehmke) in a seemingly already-lost game. Perhaps Cobb saw an opening with Mays’s performance: He had escaped a bases-loaded jam in the second. Sid Mercer wrote, “Cobb’s generalship yesterday was refreshing in a way. … Cobb refused to give up. … he gambled and won.”11

Ehmke was sharp, as he shut out the Yankees on just two hits and no walks over the next four innings. But Mays held the shutout through seven innings, after wriggling out of bases-loaded jams in the second and fourth and turning away the Tigers with two runners in scoring position in the sixth and seventh.

Even with the four-run lead, Miller Huggins could not relax. The Tigers stranded 11 men through seven innings, and Babe Ruth had to haul in two long drives in the seventh to keep the Tigers scoreless. The Yankees’ star was quiet at the plate on this day: he went hitless in five at-bats and got the ball out of the infield only once.

Then came the eighth. After Mays gave up two singles and two walks to force in a run with one out, Huggins decided to replace him. Mays, who would have a controversial late-game fade in the 1921 World Series, refused to leave the mound. Dan Daniel called it “open insubordination” on the part of Mays, who “sulked on the mound and would not give way to the incoming Bob Shawkey.12 Yankees coach Charley O’Leary had to escort Mays to the dugout.13

Shawkey, a 20-game winner the previous two seasons and the Yankees’ ace since he came to New York in 1916, entered with the bases loaded and one out. He had already won 17 games in 1921, but was far less effective this season, at age 30, with an earned-run average above 4.00.14

He induced Bob Jones to hit a comebacker to the mound, but his throw to catcher Wally Schang got away, and two more runs scored. Sid Mercer wrote that instead of simply tossing the ball to his catcher, Shawkey hurled the ball as if he were farther away. “If you have ever tried to catch a ball hurled with considerable force by a thrower who is literally ‘on top’ of you,” you would understand why the ball bounced off Schang’s mitt.”15 Fred Lieb wrote that Shawkey could have handed the ball to Schang.16

With the Yankees’ lead now down to 4-3, Cobb’s two-run single (one of three in the game) gave the Tigers the lead. Bobby Veach followed with a triple, driving in Cobb and pushing Detroit’s advantage to 6-4.

Waite Hoyt replaced Shawkey but gave up three more hits (two more runs scored) before he retired the side. The Tigers had scored eight runs in the inning. “They collapsed as though they had been hit by several lightning bolts and a few 12-inch shells,” wrote the New York Tribune reporter about the Yankees.17 Sportswriter Dan Daniel moaned, “Kings for one day, jesters for another.”18

The Tigers were not done. They knocked Hoyt out with three straight hits to start the ninth. Detroit had blasted New York’s three top starters for 10 runs in less than one full inning. While the Yankees did score two late-game runs, the result was a devastating 10-6 loss, allowing the idle Indians to move into first place.

The Detroit News reporter said the Yankees were “almost ready to follow the Pittsburgh Pirates on a long plunge down the chutes.”19 Heywood Broun noted after the game that had the Yankees been around in the days of Isaac Newton, “he would not have been obliged to mess about with apples to prove the laws of gravitation” since the Yankees “cannot seem to help falling.”20

In their book on the 1921 season, Lyle Spatz and Steve Steinberg wrote that Huggins “had experienced many difficult losses in his baseball career, but this may have been the toughest. The crushing defeat … was the final blow. The curses of the fans, the hostility of the press, the rebellion from his own players, and now this collapse on the field.”21 That evening, Huggins penned a letter of resignation to Jacob Ruppert, who refused to accept the resignation. The Yankees soon rallied to win the 1921 pennant, initiating their four-decade dynasty.

The story of Huggins’s resigning after this game was not publicized at the time. Even when it did surface, it did not appear in any of New York’s leading papers. On December 12, 1922, Fred Lieb wrote in the Evening Telegram that Huggins was blamed for not lifting Mays sooner (some accounts said he should have left him in longer, with the hindsight of what followed) and wrote out his resignation.22 Ed Van Every also mentioned Huggins’s action in the Evening Mail after the 1921 World Series.23

Huggins suffered a nervous collapse after the 1921 World Series. Once again, the story was hidden from the public and reported as tonsillitis. And once again it was Fred Lieb who revealed what really happened.24 This was confirmed by sportswriter Will Wedge three years later.25

Lurking in the background was the power struggle between co-owners Ruppert and Huston, which may explain why Huggins was not re-signed for the 1922 season until December. Ruppert eventually bought out Huston in December 1922.

Two years after Huggins’s 1929 death, Ruppert reflected on his understated and underappreciated manager. “Huggins had vision. … Far-seeing judgment. … I doubt if anybody except Huggins had any foreknowledge of just how predominant Ruth could become in the baseball world.”26 Sportswriter Joe Vila, one of Huggins’s few supporters in the press, wrote, “It was Ruppert’s words of encouragement in the darkest hours that kept Huggins from losing his nerve.”27

1 Yankee Stadium was not built until 1923. The Yankees shared the Polo Grounds with the New York Giants.

10 The Tigers had a balanced starting rotation of Oldham, Ehmke, Dutch Leonard, and veteran Hooks Dauss. They each won between 10 and 13 games in 1921 and hurled between 196 and 245 innings that year.

15 Sid Mercer, “Ty and His Tigers Knock Yankees Out of Lead.” For some reason, Schang was charged with the error.

19 “Yank Hurlers Slipping as Fight Grows Warm,” Detroit News, September 20, 1921. The Pirates had a big lead in the National League race before stumbling, as the Giants stormed into first place and put a lock on the pennant.

23 Ed Van Every, “Will Babe Ruth Manage the Yankees?” New York Evening Mail, October 24, 1921. Van Every’s account was odd, in that he claimed that Huggins was “all but deposed” after this game, and that Peckinpaugh and Ruth ran the team the rest of the season, including the Series. But the World Series accounts all confirmed that Huggins was very much the decision-maker and leader of the club. And he returned as manager the following year.

25 Will Wedge, New York Sun, May 20, 1924. Wedge wrote that Huggins “admits he has never felt quite the same since his nervous breakdown several years ago.”