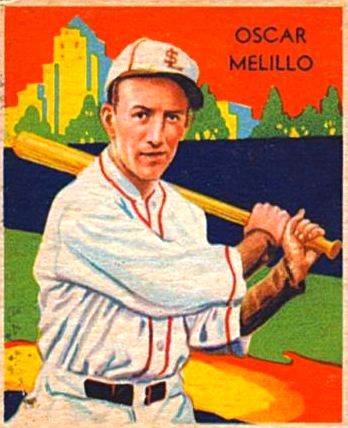 Second baseman Oscar “Ski” Melillo of the St. Louis Browns is “one of the greatest defensive players of the day,” said the St. Louis Post-Dispatch in August of 1929.1 He is “the heart” of the Browns’ defense, wrote W.W. Smith of the St. Louis Star, and “one of the best-liked players on the club because he’s alive, dynamic, [and] bubbling with good humor.”2 The 30-year-old infielder had overcome a serious kidney ailment and was now thriving in his fourth season with the Browns. Against the Washington Senators on Thursday, September 19, 1929, Melillo’s defensive gem was the highlight of the game.

About 1,000 fans attended the game on a chilly day at Griffith Stadium in Washington, D.C. The Browns were in fourth place and the Senators in fifth place in the American League standings. Pitchers George Blaeholder of the Browns and Fred “Firpo” Marberry of the Senators “staged as pretty a mound duel as any one could wish to see,” reported Frank H. Young of the Washington Post.3 The game was scoreless through eight innings.

The Senators made several outstanding defensive plays. In the second inning, center fielder Sam West raced in, caught a ball “only an inch or so from the ground” and threw to first base in time to double up a St. Louis baserunner.4 In the sixth inning, first baseman Joe Judge knocked down a hot liner off the bat of Heinie Manush and tossed to Marberry covering first base to retire the Browns’ leading hitter. And in the eighth inning, Manush was robbed again, this time by Sam Rice, who made a sensational one-hand grab at the right-field wall.

But it was Melillo’s play in the bottom of the eighth that made headlines. Jackie Hayes led off with a double against the left-field wall, and Marberry got aboard with a bunt single, with Hayes holding at second base. Judge then smashed “a vicious liner back at Blaeholder, which caromed off the pitcher’s glove to Melillo on the fly.”5Melillo stepped on second base to double up Hayes, and then tagged Marberry in the baseline for the third out. The triple play was nearly unassisted; Blaeholder, acting in self-defense, earned an assist, and Melillo was credited with all three putouts.

The Browns broke the scoreless tie in the top of the ninth. With one out, Red Kress reached on an error by Washington second baseman Buddy Myer, and Frank O’Rourke singled to left field, sending Kress to third base. Hayes, the third baseman, received the throw from left fielder Goose Goslin and threw wildly to first base while trying to pick off O’Rourke, allowing Kress to score.

With the Senators trailing by a run, Rice led off the bottom of the ninth with an infield single, and Goslin beat out a bunt down the third-base line. First baseman Lu Blue overran Myer’s bunt, and the bases were filled with nobody out. West then lashed a walk-off single to center field, scoring Rice and Goslin, and the final tally was Washington 2, St. Louis 1.

It was reported in the offseason that Connie Mack, manager of the 1929 world champion Philadelphia Athletics, wanted to trade for Melillo, but “It is difficult to vision the Browns getting rid of such a valuable player as Melillo,” wrote James M. Gould of the St. Louis Post-Dispatch.6 In 1931 and again in 1933, he finished among the top 10 players in the American League Most Valuable Player Award voting. Melillo remained with the Browns until early in the 1935 season when the Boston Red Sox traded for him. He retired following the 1937 season and coached for many years with the Browns and other teams.