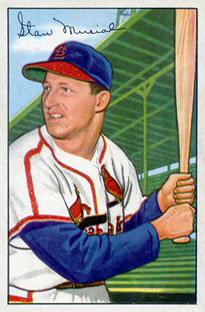 On the morning of Saturday, September 20, 1952, the St. Louis Cardinals had only the slimmest of mathematical chances to win the National League pennant. Since July 1, the closest the Cardinals had been to first place was on September 9, when they were within 6½ games of the league-leading Brooklyn Dodgers. When play closed on September 19, the Cardinals had eight games left in the season and were seven games behind the Dodgers. A single loss would end their chances of winning the pennant.

The Cubs were already out of the pennant race on September 20. They had reached third place at the start of play on July 1 with a 38-30 record. Since then the Cubs had gone 35-46 and were solidly ensconced in fifth place.

The drama in September 20’s Cardinals-Cubs game was restricted to a few players who were striving for league titles. The Cardinals’ Stan Musial and the Cubs’ Frank Baumholtz were nip and tuck for the National League batting average lead, and the Cubs’ Hank Sauer was focused on keeping his lead in home runs and RBIs.

Musial, the consummate high-average hitter, had his usual .300-plus season underway. He reached his peak on May 21 when his average was .349. He entered this game with his average at .336. As a model of consistency, Musial had won batting titles in five of his previous 10 seasons and averaged .347. The 1952 season was no different — since August 28 Musial’s average had been at or above .330.

Baumholtz was clearly an underdog in the batting race. His first season was 1947, when he played for the Cincinnati Reds. In June 1949 he was traded to the Cubs along with outfielder Sauer. His career batting average entering the 1952 season was a respectable .279. Baumholtz was having the best season of his career. Over his prior 12 games, he was on a hot streak and had hit an even .500 (24 hits in 48 at-bats) and raised his average from .309 to .332.

On September 19, the first game of the three-game series, Musial went 1-for-4 while Baumholtz was 2-for-3. In one day Baumholtz had gained three points on Musial and entered the September 20 game within four points — Musial was at .336 and Baumholtz at .332. With not much else to feature, the hometown Chicago Tribune featured the two players, both left-handed hitters, in a headline for a photo on September 20 titled “National’s Big Swing Men.”1

As for Sauer, it appeared that he had the RBI race well in hand with 120 on September 20. His closest contenders were the Dodgers’ Gil Hodges (102), the New York Giants’ Bobby Thomson (101), and the Philadelphia Phillies’ Del Ennis (99). Sauer was also in the lead for home runs with 37. His nearest competitors were the Pittsburgh Pirates’ Ralph Kiner (36) and Hodges (32).

The game featured two pitchers who had positive records for the season. The Cardinals’ Gerry Staley was their ace and entered the game with a record of 16-13 and a 3.26 earned-run average. For the Cubs it was Warren Hacker on the mound. While Bob Rush was the team’s ace, Hacker came in to the game with a record of 14-8 and an earned-run average of 2.36. Hacker was another Cubs player on a hot streak. In his previous seven games he had allowed only four runs in 45⅓ innings and four days earlier had thrown a three-hit shutout over the Giants in the Polo Grounds.

The game started as a pitching duel for four innings as neither team scored. The only hit was a third-inning single by Hacker.

Both teams scored in the fifth inning. Enos Slaughter ended Hacker’s bid for a perfect game with a leadoff single. He moved to second base on a sacrifice by Peanuts Lowrey. Hal Rice followed with a single, scoring Slaughter and giving the Cardinals a 1-0 lead.

In the bottom of the inning, after a one-out double by Bill Serena, Hal Jeffcoat drove him in with a single to right field.

In the sixth inning the Cardinals got a baserunner by way of an error, but did not score. The Cubs opened their half with singles by Tommy Brown and Baumholtz. Dee Fondy moved the runners up with a sacrifice. That brought up the league’s leading home-run hitter, Sauer, and the Cardinals walked him, loading the bases. Toby Atwell followed with a sacrifice fly to left field to make the score 2-1, Cubs.

The Cardinals were again hitless and scoreless in the seventh while Cubs added another run to move ahead, 3-1. Randy Jackson led off with a walk and Jeffcoat bunted him to second. After Hacker popped out, leadoff batter Brown came through with a single to left field to give Chicago a two-run edge.

With two outs and no one on base in the St. Louis eighth, player-manager Eddie Stanky pinch-hit for Staley and singled for the Cardinals’ third hit. Cloyd Boyer came in as a pinch-runner but was stranded as Solly Hemus lined out to end the inning.2

In the Chicago half of the inning the Cardinals’ tempers flared when Fondy walked with one out. Catcher Del Rice raised objections to home-plate umpire Lon Warneke, who tossed Rice from the game. Les Fusselman took over behind the plate. Fondy immediately challenged him — he stole second base and went to third on Fusselman’s throwing error. On the play at third base, Hemus, the Cardinals’ shortstop, was the second Cardinal player ejected after he protested the safe call by umpire Frank Secory.

After the commotion subsided, Sauer batted. He hit a fly ball to left field to score Fondy, extending the Cubs’ lead to 4-1. It was Sauer’s 121st RBI of the season.

Hacker methodically retired the heart of the Cardinals’ order in the top of the ninth. Musial made the second out; his popup to the catcher concluded an 0-for-4 day.

The loss ended the Cardinals’ slim pennant chances. Hacker, whose record went to 15-8, had bested his counterpart, Staley. He pitched a masterful game in which he allowed three hits and no walks. The game took an efficient 2 hours and 5 minutes.

The National League hitting race was even tighter at the close of play on September 20: Musial’s hitless day dropped him to .333, just a point ahead of Baumholtz’s .332.

The Cardinals’ record stood at 85-62. They were out of the pennant race, three games behind the second place Giants, and three games ahead of the fourth place Phillies. The Cubs’ record was 74-76.8

In addition to the sources cited in the Notes, the author consulted Baseball-Reference.com, Retrosheet.org, and the October 1, 1952, issue of The Sporting News.

7 The WHIP statistic is determined by dividing walks plus hits by the number of innings pitched. Hacker’s final WHIP for 1952 was 0.946, the best in either league. He was the only pitcher (of those qualified) with a WHIP under 1.00.