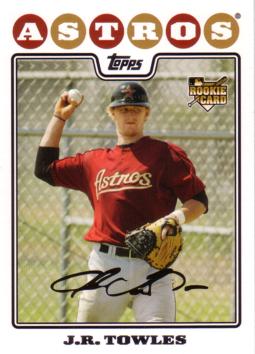 In most seasons in the first decade of the 21st century, a September game between the arch-rival Houston Astros and St. Louis Cardinals had playoff implications, but on September 20, 2007 both teams had sub-.500 records and were not headed for the postseason. Still, the Astros’ 18-1 obliteration of the Cardinals on this date was remarkable not only for the offensive numbers that Houston posted but also for the contributions of three September call-ups, the most notable of them catcher J.R. Towles.

When major-league teams are allowed to expand their rosters at the beginning of September, players are called up for a variety of reasons. The obvious goal for a team in contention is to reinforce its bench and bullpen, but September is also a time to give a top prospect a glimpse of life in the majors or to discover whether a midlevel prospect has what it takes to make it in the big leagues. Stars can be born in September, though many of them turn out to be shooting stars.

For their game against the Cardinals on the 20th, the Astros started three call-ups: center fielder Josh Anderson, who had spent the entire season at the Astros’ Triple-A affiliate; shortstop Cody Ransom, who was Anderson’s season-long teammate; and catcher J.R. Towles, who had advanced from Class A to Double-A (where he spent the majority of the season) to Triple-A, and now to the Astros. In this game, these three new Astros would combine for 10 hits, four walks, eight runs, and 11 RBIs.

The scoring got under way in the top of the second inning. The Cardinals’ starter, Braden Looper, walked leadoff batter Carlos Lee. He retired the next two batters, then the Ransom-Towles combination struck for the first time: Ransom singled and Towles lined a double down the left-field line to drive in the first two runs of the game.

The top of the fourth inning became something that Looper had seen before and would see again before his day on the mound ended. Lee led off the inning with a single and advanced to third on Mike Lamb’s double. After Chris Burke grounded out, Ransom was intentionally walked to set up a possible double play. Towles foiled the strategy with a two-run single that gave the Astros a 4-0 lead.

Looper continued to have problems. In the sixth he allowed back-to-back, one-out doubles to Ransom and Towles that made the Cardinals’ deficit 5-0. A two-out walk to Anderson ended Looper’s night, though the Astros failed to capitalize. After the game a frustrated Looper said, “I felt all right. It’s just that everything was up. I kept trying to make an adjustment, and every time I’d make a good pitch, they hit that too.”1

Relievers Andy Cavazos and Kelvin Jimenez shared Looper’s difficulties and frustrations as they pitched in the seventh inning. Cavazos surrendered consecutive one-out singles to Lee, Lamb, and Burke; Burke’s hit drove in Lee, while Lamb scored and Burke advanced to second on left fielder So Taguchi’s throwing error. After Cavazos walked Ransom, he was replaced by Jimenez, who loaded the bases by hitting Towles with his second pitch. Astros starter Wandy Rodriguez struck out, but Anderson hit a two-RBI single and Craig Biggio followed with a base hit that plated another run and made the Astros’ lead 10-0.

The Astros followed that five-run outburst with six more runs in the eighth. Eric Bruntlett reached base on second baseman Brendan Ryan’s error, Lamb walked, and Ransom followed a Chris Burke strikeout with a single that loaded the bases. Brian Falkenborg became the Cardinals’ fourth pitcher of the game but was unable to provide any relief for his team’s beleaguered staff. He walked Towles to force in a run, allowed a single to the pitcher Rodriguez that drove in another run, and unleashed a wild pitch during Anderson’s at-bat that scored a third run before he could get a single batter out. Falkenborg retired Anderson on a grounder to shortstop on which Towles scored, then gave up consecutive singles to Brad Ausmus, Adam Everett, Bruntlett, and Lamb; Ausmus’s single drove in Rodriguez, and Ausmus scored on Lamb’s hit to turn the game into a 16-0 rout.

After Falkenborg finally ended the Astros’ half of the eighth by retiring Burke, the Cardinals scored their lone run and received the small consolation of avoiding a shutout. Miguel Cairo singled and went to third base on center fielder Anderson’s error. Skip Schumaker followed with an RBI single that was the only damage the Cardinals could muster against Rodriguez.

Infielder Aaron Miles, who had entered the game as the Cardinals’ left fielder in the top of the eighth, went to the mound to pitch the final inning for manager Tony LaRussa’s squad. Miles didn’t fare any better than his predecessors, however. He hit Ransom with his first pitch and gave up a two-run homer to Towles on his second pitch. Miles also allowed singles by Humberto Quintero and Anderson before inducing a double-play grounder by Ausmus and a popout by Everett. Astros reliever Mark McLemore then finished the 18-1 victory.

It was the 20th time the Cardinals had allowed their opponents to score in double figures in 2007. The 18 runs allowed and 17-run margin were both season highs for the team. In his postgame news conference, LaRussa simply said, “Not much to say about that one, boys. That wasn’t fun at all.”2

While LaRussa’s statement was true for the Cardinals, the Astros had enjoyed themselves immensely and could now examine what they had accomplished. The Astros’ 18 runs were a season high and tied for second-most in franchise history – they had scored 19 twice – and were the most runs the team had scored in a game since they also had tallied 18 against the Los Angeles Dodgers on August 26, 2003. Their 23 hits were also a season high and the third-most in franchise history – the team record as of 2014 is 25 hits – and were the most hits for the team in one game in 40 years; they had also accumulated 23 hits against the Cardinals on June 7, 1967.

Individually, every Astros batter had at least one hit in the game, and the Astros’ three September call-ups had constituted a veritable wrecking crew. Anderson had hit 3-for-6 with a walk and three RBIs from the leadoff spot, and said after the game, “This is special to be part of something like this. It’s fun. They always say hitting’s contagious, but it’s fun when everyone’s involved and everybody’s swinging the bat well.”3 Ransom, who had batted seventh, had gone 3-for-3 with two walks and scored five runs.

The game, however, had truly been “The Towles Show,” as Astros manager Cecil Cooper called it. Towles was 4-for-4 with two doubles, a home run, a walk, a hit-by-pitch, three runs scored and eight RBIs.4 Towles’ RBI total was an Astros record and they were the most RBIs by a major-league catcher since Ivan Rodriguez also drove in eight for the Texas Rangers against the Seattle Mariners on April 13, 1999. “I can’t even describe it,” Towles said. “This was the last thing I thought would happen to me, coming to the big leagues. This is beyond words now.”5

If one September game, or even one entire September, were a true indicator of major-league success, then the Astros’ future would have been bright indeed. Unfortunately for the team, the three stars of this game were of the meteoric variety. Anderson was traded to the Braves in November 2007 and was out of the majors after 2009. Ransom had a journeyman 11-season career with six different teams. After splitting 2013 between the San Diego Padres and Chicago Cubs, his major-league playing career appears to be at an end, though he is playing professional ball in 2014 with the Seibu Lions in Japan. Towles, who was the biggest star of the game, also has become the biggest disappointment. Astros catcher Brad Ausmus had become so offensively challenged that Towles was handed the starting catcher’s job for the 2008 season solely on the strength of his performance in September 2007. Unfortunately, not only was Towles unable to match that month’s .375 average, he never again batted over .200 and last played in the major leagues in 2011. After playing for the independent Atlantic League’s Bridgeport Bluefish for most of 2014, Towles was signed by the Texas Rangers on August 25 and assigned to their AAA affiliate to replace recent Rangers call-up Tomas Telis; whether the Rangers organization retains him beyond 2014 remains to be seen. Such are the thrills and perils of September for rookies.