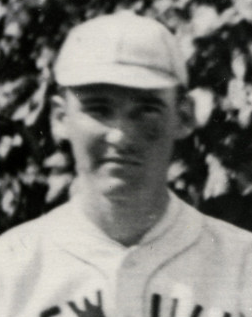 After a world championship in 1920 and a tight pennant race with the 1921 Yankees, the Cleveland Indians found themselves out of the pennant race early in 1922. It was obvious that “Cleveland was in a state of disintegration and needed new blood.”1 Scouts were dispatched all over the country to find players to revitalize the Tribe. By September 18, the recruits flooded the Cleveland dugout: there were 10 prospective pitchers, five outfielders, three infielders, and a first baseman. They joined rookie catcher Luke Sewell and outfielder Pat McNulty who were already with the squad. Over the next week veteran Sherrod Smith was picked up on waivers and three other rookies were signed.

Now it was up to manager Tris Speaker to evaluate the talent. Speaker benched himself and Homer Summa was plugged into the lineup, playing right field. Summa hit .348 in the remainder of the season and earned a spot with Cleveland that lasted through 1928. Otherwise, Speaker seemed in no hurry to give his recruits much game experience. He employed a couple of pinch-runners and gave pitching assignments to  Dewey Metivier and George Winn on the 19th and 20th.

On September 21, 2,000 fans attended the game at Dunn Field. The visiting Boston Red Sox sent 39-year-old veteran John Picus Quinn to the mound. The Indians countered with rookie Wayne Middleton in his second appearance and only start. Rookies Summa and McNulty joined Middleton in the lineup.

Middleton pitched two scoreless innings and Cleveland jumped to a 1-0 lead. In the third, Middleton lost control of his curve and surrendered two runs. He took the mound again in the fourth, but was still wild. Veteran Guy Morton came in to relieve him but allowed Quinn to launch a three-run homer to deep center. Morton was touched for three more runs in the fifth to put the Red Sox ahead, 8-1.

Speaker, perhaps feeling the game was lost, took the opportunity to play some rookies. He inserted Uke Clanton at first base, Chick Sorrells at shortstop, and Ike Kahdot at third. Joe Rabbitt pinch hit for Morton and singled before taking over left field. Morton was replaced by rookie Logan Drake and Luke Sewell took over behind the plate. The only non-rookie left on the field was second-year player Riggs Stephenson, who went to second base to spell Joe Sewell.

Drake was making his debut and showed some nervousness, surrendering two singles and a walk to the meat of the Red Sox order. He composed himself and struck out Frank O’Rourke before coaxing two forceouts to end the inning. The Tribe cut the lead to 8-3 in the sixth, but Drake surrendered a walk and two hits to allow another run in the seventh. Drake then pitched a scoreless eighth. Speaker replacing Drake, smacked a pinch-hit single that plated two runs. The score now stood Boston 9, Cleveland 5.

The stage was now set for Elmer “Doc” Hamann to make his most inauspicious pro debut. Hamann had been an All-State basketball star in high school in New Ulm, Minnesota. He went to St. Thomas College in St. Paul and joined the baseball team in the spring of 1922. He made headlines with a 1-0 win over the University of Minnesota. That summer he returned home and pitched for the New Ulm team on weekends. Unlike all the other dozen rookies used in the game, he had no previous professional experience. The first two batters he faced were Johnny Mitchell and Ed Chaplin, the only rookies in the Boston lineup. They both walked. Hamann hit Quinn and then walked Mike Menosky which forced in another Red Sox run. Elmer Miller followed with a triple, and George Burns and Del Pratt each hit singles.

Speaker had seen enough. Hamann left the game, not having recorded any outs. Burns subsequently scored to account for six runs allowed, all of them earned and leaving Hamann with an earned-run average of infinity. Hamann never appeared in the majors again, making his career pitching stats the worst of all time.

There have been performances that were worse, like Bob Kammeyer, who on September 19, 1979, ended his career against Cleveland giving up eight runs on seven hits and a hit batsman, while not recording an out. Kammeyer, a Yankee, had pitched seven games the previous season, however.

Hamann might have suffered one additional run scored (Pratt) had the relief work of rookie reliever George Winn not been successful. Winn started a double play and closed out the inning facing only three hitters. Boston’s Quinn closed out his complete game in the bottom of the ninth. On the day Quinn was 1-for-1, walked, sacrificed, was hit by a pitch, and scored three of the 15 Red Sox runs.

The Indians employed 11 rookies — and six of them (Sorrells, Clanton, Hamann, Rabbitt, Middleton, and Kahdot) — never saw action in another major-league game. Speaker did play split-squad games during an unusual late-September gap in the schedule which gave the rookies a chance for more evaluation. Sewell, Drake, Winn, and Summa all played in 1923 with Cleveland.

The local paper waxed philosophical on the game. “Every fan went home in a happier mood than if the regular tribe had won. And six (sic) kids had their chance to break in …”2 Other news outlets were less forgiving. Both the Boston Herald and The Sporting News refer to the game as a farce. Speaker had five regular-season games left and did not duplicate the “mass tryout” again. During the final three games (all wins), he made no substitutions and the Indians inched into fourth place ahead of Chicago. The Boston Red Sox, even with the large-margin win, finished in last-place, 33 games off the lead.

Note: Only Hamann, Drake, and Clanton debuted in the September 21 game; all the others had played earlier games.

All boxscores obtained from Baseball-Reference.com. Thanks to Tom Ruane for some clarification.