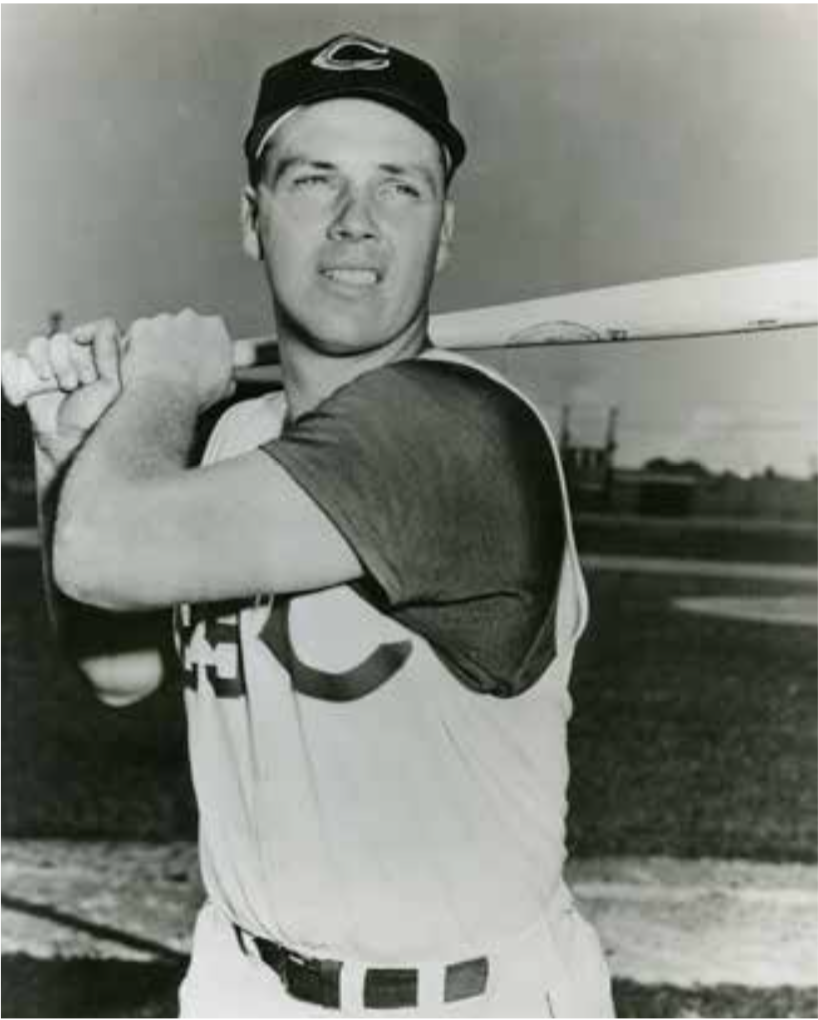 The 1955 National League pennant race had already been decided when the Milwaukee Braves and the Cincinnati Redlegs met in the Queen City on the steamy afternoon of September 21. The Braves entered the game 13 games behind the Brooklyn Dodgers with only three games remaining, and the Redlegs were five games under. 500 at 73-78. A “crowd” of 1,503 showed up at Crosley Field. Despite the heat, one person was very busy, the scoreboard operator, as the Redlegs walloped the Braves, 14-5. That attendance figure represented a season low for Cincinnati, and the lowest attendance the Milwaukee Braves had ever played in front of. Braves starter Chet Nichols (9-6) squared off against Johnny Klippstein (8-10). In spite of the 19 runs scored and the 24 hits, the game was played in a speedy 2 hours 26 minutes.

The Braves went quietly in the first inning. Billy Bruton flied out to center field, Johnny Logan singled to left, and Klippstein, known for his heater, struck out Eddie Mathews and Henry Aaron. Johnny Temple drew a walk off Nichols to open the Reds half of the inning. After Smoky Burgess flied out to right field, the Reds loaded the bases on a single to left by Ted Kluszewski and a walk to Wally Post. Gus Bell was up next, and he blasted a grand slam, his 26th homer of the season. Braves manager Charlie Grimm relieved Nichols with Phil Paine,1 who got Ray Jablonski out on a popup to third, and Chuck Harmon on a fly ball to center.

Bell was an underrated power hitter of the mid-1950s. He finished the 1955 season with a career-high .308 batting average. 27 round-trippers and 104 runs batted in. He also had a career-high 21-game hitting streak.2

Milwaukee narrowed the lead to 4-1 in the top of the third inning. Paine led off the inning with a single, went to third on Bruton’s single to right, and scored as Logan grounded into a double play.

Cincinnati got the run back in the bottom of the third. The Reds loaded the bases on Kluszewski’s single and walks to Post and Bell. Kluszewski scored on Harmon’s one-out sacrifice fly to right. Paine struck out Klippstein to end the inning.

Neither team got a hit in the fourth, though both drew walks. The Braves went in order in the top of the fifth, with Jack Dittmer, pinch-hitting for Paine, striking out to end the inning. Paine had a decent outing, working 3⅔ innings, yielding a run and two hits, walking four, and striking out three.

The Reds’ lead ballooned to 7-1 in the bottom of the fifth as they feasted on Braves pitcher Roberto Vargas. Bell led off with a single to left, Jablonski was hit by a pitch, and both runners advanced on a wild pitch. Harmon doubled to left, scoring both runners, but was thrown out at third trying for a triple. The inning ended with McMillan flying out to center, and Klippstein striking out.

After the Braves went down in order in the top of the sixth, the Reds scored three more runs in the bottom of the inning. With one out, Burgess singled to right and Ted Kluszewski homered, his 47th and last of the season. (He finished second behind Willie Mays’s 51.) The Redlegs added another run when Post doubled and scored on Bell’s single. John Edelman relieved Vargas and got the Braves out of the inning without further damage.

Kluszewski was another Redleg power hitter. An All-Star from 1953 to 1955, Big Klu, so known for his notoriously hulking physique and biceps, was the rare combination of a power hitter who seldom struck out. In 1955 he belted 47 home runs while striking out only 40 times. No player since then has come close to that ratio.

Edelman was touched for three runs in the seventh inning. With one out, Temple singled to center and Burgess flied out to center. The third out took a while to get. Kluszewski singled and Post walked, loading the bases. Bell came up with an opportunity to hit his second grand slam of the game, a feat that had never before been accomplished by a National Leaguer.3 He didn’t hit a homer, but doubled to center, scoring all three runners and giving the Redlegs a 13-1 lead. Bell ended up going 4-for-4 with eight RBIs. They put him over 100 for the third straight season. The inning ended when Bridges lined out to third.

The Braves got a grand slam of their own in the top of the eighth. Del Rice singled to lead off the inning. Bob Roselli pinch-hit for Edelman and walked, and Billy Bruton singled, loading the bases. Johnny Logan’s slam made the score 13-5.4 Mathews struck out, Aaron singled, Taylor struck out, and Chuck Tanner popped out to second, ending the inning.

Dave Jolly came in to pitch the ninth inning for the Braves. With two outs he walked Klippstein, who scored on back-to-back singles by Temple and Burgess. Kluszewski flied out to left to end the inning.

The Braves went quietly in the ninth. Danny O’Connell flied out to center. Del Crandall walked. Andy Pafko pinch-hit for Jolly and struck out, and Bruton flied out to left, ending the game.

Klippstein went the distance, scattering eight hits, striking out seven, and raising his record to 9-10. Nichols worked a forgettable one-third of an inning in which he gave up two hits, two walks, a home run and four earned runs. He took the loss, dropping his record to 9-7.

1 Nichols and Paine were both high-school pitching stars in their native Rhode Island, Paine at Burrillville High School and Nichols at Pawtucket East High School. Paine defeated Nichols in the deciding game of the 1948 Rhode Island Interscholastic League tournament.

3 Through 1955 three American Leaguers had hit two grand slams in a game: Tony Lazzeri of the New York Yankees in 1936, Jim Tabor of the Boston Red Sox in 1939, and Rudy York of the Red Sox in 1946. Jim Gentile of the Baltimore Orioles accomplished the feat in 1961.  On July 3, 1966, Atlanta Braves pitcher Tony Cloninger became the first National league player to hit two grand slams in a game.

4 Logan’s grand slam was his first ever in his baseball career, including Little League, high school, and the minors.