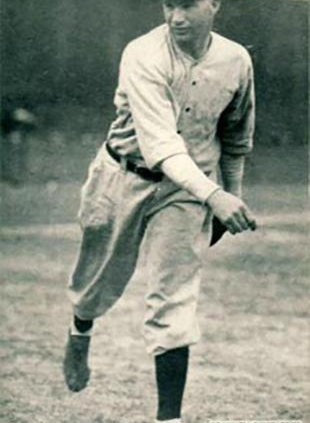 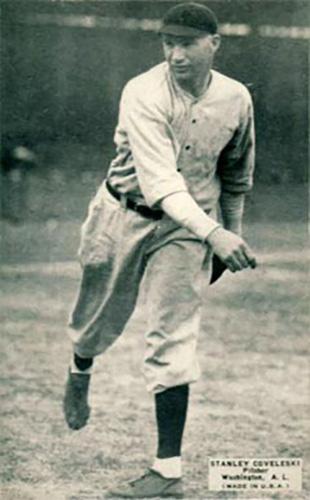 On August 27 the St. Louis Browns finished a sweep of Washington that allowed the Philadelphia Athletics to creep to within a half-game of first place. Since then the Senators (or Nationals, as many sportswriters called them) were on a torrid pace, posting a 16-5 mark. They were now on the verge of clinching their second consecutive pennant (92-50) when they hosted the Cleveland Indians on September 22.1

The Indians were struggling and stood in sixth place with a 67-78 record. They had taken the weekend series from Boston and came to the Capital City for a three-game series. Manager Tris Speaker had expanded the roster and was taking a look at some pitching prospects.

Stan Coveleski took the hill for Washington seeking his 20th victory. He was now 36 years old and was approaching the end of his Hall of Fame career. His primary pitch was the spitball. The pitch had been ruled illegal in 1920, but 17 pitchers who used the pitch were allowed to continue throwing it for the duration of their careers.2 By September 1925 there were 11 of them still in the majors.

Coveleski would put his fingers to his mouth before every pitch but did not necessarily wet the ball. Making the batter think the spitball was coming could be as effective as actually throwing it. When throwing the spitball, he wet his index and middle fingers. To help generate saliva he would have alum in his mouth. He had a good curveball, a decent fastball, and a changeup to augment the spitter.3

Coveleski (nicknamed Covey) had enjoyed his finest seasons with Cleveland. He won 20 games in four consecutive seasons, including 24 wins when they took the 1920 pennant. He concluded that season by winning three games against Brooklyn in the World Series. He posted microscopic ERA (0.67) and WHIP (.630) numbers against the Robins.

But Coveleski’s 1924 season was the weakest of his career. He had a losing record and his 4.04 ERA was the highest in his career to that point. In December Cleveland swapped him for two prospects and he was wrapping up his first season with the Senators. Teamed with Walter Johnson and in a pennant race again helped to rejuvenate him. His opponent was 27-year-old Emil “Dutch” Levsen, who had recently been recalled from Rochester and was making his second start in the majors.

The Senators were limping into the final games of the season. Shortstop Roger Peckinpaugh was nursing a foot injury and Walter Johnson was out of action with a charley horse. Coveleski took the hill for the early autumn game and retired the Indians in the top of the first. With one out in the bottom half of the frame Bucky Harris doubled to right field. After a foul out, Harris advanced to third when Joe Judge singled off Levsen’s mitt.

Judge attempted to steal second, but the quick throw from catcher Glenn Myatt froze him on the basepath. The play was meant to be a double steal; however, Harris was slow in making his break for home. Both runners were now hung up “with the entire Indians infield and Myatt trying to make an out some place.”4 After five throws, Myatt chased Harris back toward third base and dove and tagged him for the third out.5 What happened next varies with the newspaper account. The Washington Evening Star said that Harris rolled over and Myatt stepped on his hand. The Cleveland Plain Dealer wrote that third baseman Johnny Hodapp stepped on Harris, gashing his finger.6

Harris had to leave the game with a lacerated digit; Everett Scott replaced him. Harris missed the rest of the regular season but returned to play in the World Series. (The injury hampered him at the plate and he hit a lowly .087 as the Senators lost to Pittsburgh.)

The Indians got on the scoreboard first when Levsen walked to lead off the third. He advanced to second on a grounder and scored on a single to center by right fielder Homer Summa. Washington immediately tied the game in the bottom half of the inning. Sam Rice singled and scampered home on Scott’s double. Judge hit an infield single, sending Scott to third. A walk to Joe Harris loaded the bases, but Levsen escaped the predicament by coaxing a popup from Ossie Bluege.

Rice and Scott struck again in the fifth. Rice singled and went to second on Levsen’s wild throw. Scott drove him home and took second on the throw to the plate. Scott went to third on an infield grounder by Goose Goslin. Scott scored when Freddy Spurgeon “allowed Judge’s slow roller to go through the wickets.”7 Washington now led 3-1. The next batter drove the ball into the left-center gap. Judge was given the stop sign at third but overran the bag and was caught by the relay throw.

The Indians staged a threat in the sixth when Summa opened with a Texas League single to center. After a brilliant fielding play by Rice on a line drive, Coveleski issued a walk to Joe Sewell. The next batter, Harvey Hendrick, forced Sewell, putting runners on the corners. Spurgeon beat out a slow infield roller as Summa scored. The inning ended on a fly ball without further scoring.

Both Levsen and Coveleski cruised through the final innings. Levsen retired the last nine with the help of a back-to-the-infield catch by shortstop Sewell. Coveleski had his wet one working brilliantly. Only Sewell reached base in the final three frames.

Coveleski picked up his 20th win of the season with the victory. He lowered his ERA to 2.84 with the performance. His nearest competitor for the ERA title was Herb Pennock, who surrendered nine earned runs in his last three outings. That raised Pennock’s ERA to 2.968 and gave the title to Coveleski. His .800 winning percentage also topped the circuit with teammates Johnson and Dutch Ruether finishing third and fourth. The two teams were postponed the next day by rain and cold. They met in a doubleheader on the 24th with Washington taking both games and clinching the pennant.

Covey would not pitch any of the remaining regular-season games. Manager Harris gave three newcomers their first big-league starts at the end of the season. Not surprisingly, Washington dropped five of the last six games. Harris’s plan was to go into the Series with Walter Johnson well rested and recovered from his injury and Coveleski fresh. Johnson won the opener and Game Four. Coveleski dropped both his starts, in Games Two and Five. The Pirates took the Series in seven games.

Coveleski returned to the Washington rotation in 1926 and won 14 games. The team dropped to fourth place. He returned in 1927 and posted a 2-1 record before being released in June because of a sore arm. He finished his career with the Yankees in 1928, winning five games in May and June. He pitched his last game on August 3 in St. Louis. He enjoyed a long retirement and was in Cooperstown for his enshrinement into the Baseball Hall of Fame in 1969.

6 The Washington Post coverage attributed the spiking to Myatt.

8 For decades Covey had an ERA of 2.84. In his page on Baseball Reference he is still listed at 2.84 with 76 earned runs allowed. However the Game Logs, also on Baseball Reference, show him allowing 78 earned runs, which account for a 2.91 ERA. Either way, Pennock’s late-season woes handed the title to Coveleski. We leave it to the reader whether to accept the traditional 2.84 or the recent 2.91.