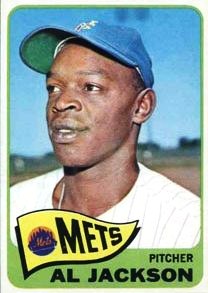 The brand-new 1962 New York Mets posted one of the worst seasons in major-league history. Roger Craig lost his 20th game of the season on August 21. Craig entered that game in the ninth with the Mets leading the Pittsburgh Pirates 6-4. He surrendered four runs before he was pulled by manager Casey Stengel with the bases loaded. The Mets finally lost the game 8-6 after squandering a three-run lead for their 95th loss of the season.

A month later Al Jackson took the mound as the Mets wound down their inaugural season. Only 3,744 fans showed up for the Saturday afternoon game against the Chicago Cubs at the Polo Grounds, the Mets’ home as they waited for their own ballpark to be built. Prior to the season, Jackson had started a total of five major-league games. He was taken by the Mets from the Pirates as the 22nd pick in the expansion draft and Casey Stengel made him a starter after being impressed with him in spring training.

Jackson, like the Mets, had struggled all season. He was unable to notch a victory until his fifth appearance, on April 29, when he pitched nine innings in an 8-0 win over the Phillies. It was the team’s first shutout. Later that season, Jackson pitched the Mets’ first one-hitter, a 2-0 win against Houston on June 22.

Jackson also pitched a complete game on September 2 to earn his eighth win of the season. Then he pitched eight innings twice more in September but was unable to get any wins as the Mets’ offense failed to support his efforts.

Stengel never wavered in his support of Jackson, even as losses piled up. “He’s artistic. I know this because he was fielding the bunted balls. He’s very intelligent and his wife’s a schoolteacher. He looks like he’s been pitching baseball for 10 years,” Stengel told reporters.”1

Jackson, for his part, said, “I must be doing something right for Casey to keep running me out there every five days.”2 When he took the mound on September 22, Jackson had an 8-19 record and was hoping to end his season on a positive note.

The Chicago Cubs were in town to face the Mets. The Cubs had struggled thus far in September, losing 14 of their 21 games. The teams had split the first two games of their three-game series and the Cubs needed a win if they were to have a chance to close out their season ahead of the expansion Colt .45s.

Jackson struggled in the first inning after striking out leadoff batter Danny Murphy. Ken Hubbs singled and came home when Ernie Banks tripled. Nelson Mathews singled with two outs to score Banks. By the time Jackson got Alex Grammas to ground out for the third out, the Cubs were up 2-0.

Paul Toth was the Cubs’ starter. Toth began the season in Chicago, but was sent back down to the Atlanta Crackers after struggling in two early-season games. He pitched well enough to get called back up in August. He won his first game back and then struggled in his next six games. But Toth had turned things around in September and was hoping to end the season with his third consecutive win.

Toth limited the Mets to just one hit through the first four innings. Although he walked two batters, the Mets never got anyone past first base. As Toth kept the Mets in check, the Cubs gave him several insurance runs in the third.

Stengel pulled Jackson and called in Ken MacKenzie. But he surrendered a single to Grammas that scored Mathews and the Cubs led 5-0 before Cuno Barragan popped out.

MacKenzie fared no better when he came back out in the fourth. With two outs, Hubbs singled. Banks hit a shot to left field that was misplayed by Frank Thomas. Banks ended up on second and Hubbs touched every base to score the Cubs’ sixth run. Williams then singled to center field and Banks scored, making the score 7-0.

MacKenzie plunked Ron Santo with an inside pitch to start the fifth. Santo moved to second on a groundout and scored on Barragan’s single.

Meanwhile the Mets had “done little to torment Toth” until the fifth.3 Rod Kanehl singled with one out and Stengel pinch-hit Sammy Taylor for MacKenzie. Taylor’s groundout pushed Kanehl to second. Choo Choo Coleman singled and Kanehl scored the Mets’ first run.

Trailing 7-1, the Mets scored another run in the seventh. Jim Hickman led off with a walk but was forced out on Kanehl’s grounder to short. With two outs, Elio Chacon singled up the middle. When center fielder Nelson Matthews couldn’t handle the ball, Kanehl was able to bring the Mets’ second run across the plate.

Seventeen-year-old Ed Kranepool replaced Gil Hodges, the oldest Met on the roster at 38, at first base in the seventh inning. The rookie had graduated from James Monroe High School in the Bronx in June and signed a bonus contract with the Mets shortly after. His appearance in the lineup made him the second youngest home team player to take the field at the Polo Grounds behind Mel Ott.4

With the Mets trailing 8-2, Stengel replaced second baseman Kanehl with Richie Ashburn when the Mets took the field in the ninth. It was the first time the veteran Ashburn had played any other position but outfield. He wasted no time in showing that the outfield was where he belonged.

Mathews walked to lead off the ninth. He took off for second on the first pitch to Ron Santo. Ashburn     “dropped Coleman’s throw but fell on Mathews, making further advance impossible.”5 Santo then lined to the pitcher, who turned and threw to Ashburn in an attempt to double up Mathews, but Ashburn dropped the ball.

Mathews stole third and scored on Grammas’s single. Grammas, “thinking Ashburn a pushover, lit out for second but a fine throw from Coleman and a splendid tag by Ashburn dashed his hopes.”6

Ashburn doubled when the Mets came to bat in their half of the inning. But it was all for naught as pinch-hitter Joe Pignatano grounded out to send the Mets to their 116th loss. It was the most losses by any National League team in the twentieth century and left them one shy of the 117 losses by the 1916 Philadelphia Athletics.

Jackson’s loss gave the Mets two pitchers with 20 losses. The last time a team accomplished that dubious feat was 1936, when Bucky Walters (11-21) and Joe Bowman (9-20) each lost 20 games for the Philadelphia Phillies.

Jackson spent four seasons as one of the mainstays of the Mets’ pitching staff. He earned the Mets’ first victory at Shea Stadium in 1964. After retiring, Jackson became a pitching coach in the Mets’ farm system. When he was asked about the 1962 season, he said, “How do I explain to my kids what losing was like? Every time you put on a uniform you want to win, but something would always happen to us.”7

Although Jackson moved beyond the loss, the game is best described by these words from New York Times reporter Robert Lipsyte: “Even in the autumn of their pathetic despair, the New York Mets cannot escape history. Each step and misstep seem destined to remain forever in the dusty recesses of major league archives, or at least in the corner crevices in the minds of those who care.”8

In addition to the sources cited in the Notes, I used the Baseball-Reference.com and Retrosheet.org websites for box-score, player, team, and season pages, pitching and batting game logs, and other material pertinent to this game account.