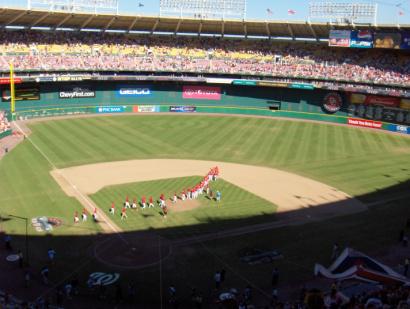 When baseball returned to Washington in 2005 after an absence of 33 seasons, RFK Stadium became the home of the transplanted Montreal Expos, now the Washington Nationals. Its cookie-cutter design was of its era — round and multipurpose.1 As this baseball finale approached, the state of RFK Stadium could best be described as leaky and creaky with plenty of rust, chipped-away concrete and seats showing signs of decay.2

Would anyone miss RFK Stadium? Outfielder Ryan Church was direct. “Nope.” After thinking for a few moments, he added, “Opening Day 2005. That’s it.”3 Catcher Brian Schneider, a former Expo who played in that opening game, was more circumspect. “The dugouts are tiny — two people can’t walk next to each other without going up the steps. At times, the smell in the dugouts gets to you. But, you know, it’s an old stadium, so you can’t expect it to smell great and you can’t expect it to be spacious.”4 Bobby Cox, who played at RFK for the New York Yankees against the Senators and managed there for the Atlanta Braves against the Nationals, had his own response to that question. “The one name that stands out here was Frank Howard. We’ll miss that. But other than that, not much.”5

Frank Howard was traded by the Los Angeles Dodgers to the Washington Senators after the 1964 season.6 The Senators were a bad team those first three seasons (1962-1964) playing in the recently built D.C. Stadium, subsequently renamed RFK Stadium in memory of Sen. Robert F. Kennedy in 1968. They only marginally improved with the addition of Howard, but at 6 feet, 7½ inches, this giant of a man became a real fan hero because of his monster home runs. Known affectionately as “Hondo” and “The Capital Punisher,” Howard’s blasts to the deepest reaches of the stadium’s upper deck from left field to straightaway center were marked by seats painted white.7 Legendary columnist Shirley Povich of the Washington Post described the reaction to Howard’s home run in the sixth inning of the last Senators game at RFK Stadium on September 30, 1971. “It brought on a crowd delirium that for the next many minutes effaced any sadness the people had brought to the stadium on the supposedly sorrowful night. Howard responded with emotion of his own, tipping his hat to a cheering crowd for the first time in his seven years with the Washington club.”8

For pregame festivities at the RFK finale, local radio/television sports-talk host and native Washingtonian Phil Wood offered the story behind the opening-pitch ceremony. “Frank Howard had been designated to throw out the first ball, but he insisted that Dick Bosman do it, since Dick had started the Senators’ last game and, as a still-active pitching coach in the Tampa Bay organization, would have no issues with throwing a strike from the mound. Also, Hondo wanted to see his buddy Boz get some added recognition.”9 Former Senators were introduced to the crowd and took the field with their current counterparts. A thunderous ovation greeted Howard as he strolled to third base with Ryan Zimmerman, who later observed, “Now I can kind of believe those white seats a little bit more.”10

In the National League East race, Philadelphia was stalking the first-place New York Mets. Just 10 days earlier, the Phillies trailed the Mets by seven games, but a three-game sweep in New York and taking the first three games against the Nationals helped Philadelphia move only 1½ behind starting play that Sunday. Ryan Howard was doing the job for the Phillies against Washington, homering on Thursday and Friday with his 41st and 42nd of the year and singling home the go-ahead run in the 10th inning of a 4-1 victory on Saturday.

The Phillies called on Cole Hamels, who was 14-5 with a 3.50 ERA, to start. The 23-year-old was their ace in his second big-league season after having been their first-round draft pick in 2002. His last victory had been on the same mound on August 16 when the Phillies beat the Nationals 4-2 with Hamels limiting them to four hits in 6⅔ innings. Joel Hanrahan (4-3, 6.45 ERA) was making his 11th start in his rookie season, but in his three previous starts he was unable to make it past the fourth inning.11

The Nationals opened the scoring in the bottom of the first. D'Angelo Jimenez singled to center, moved to second base on a walk to Ronnie Belliard, and advanced to third on a groundball double play. Austin Kearns’ single to center gave the Nationals a 1-0 lead.

Hanrahan was holding the Phillies scoreless through four innings while striking out seven, but his pitch count had already reached 85. In the fifth inning, he walked Hamels and Chase Utley. When Pat Burrell’s single to left knotted the score at 1-1, Hanrahan’s afternoon was done and relief pitchers Mike Bacsik12 and Saul Rivera managed to get the Nationals out of the inning without further damage. In the sixth inning with Luis Ayala on the mound for the Nationals, the Phillies went ahead 2-1 on Carlos Ruiz’s single that produced an unearned run after two Washington throwing errors.

The Nationals had an immediate answer in their half of the sixth as Antonio Alfonseca replaced Hamels, but only briefly. Jimenez opened with a line-drive double to right field, followed by another walk to Belliard. Kearns got his second RBI single of the afternoon, scoring Jimenez, before Alfonseca loaded the bases by walking Tony Batista. When Geoff Geary came in and hit catcher Jesus Flores, the Nationals took a 3-2 lead. In the eighth inning, the Nationals added what would become an important two runs. After singles by Zimmerman and Kearns, pinch-hitter Robert Fick knocked in Zimmerman with an infield single and Schneider’s sacrifice fly to right scored Kearns for a 5-2 lead. 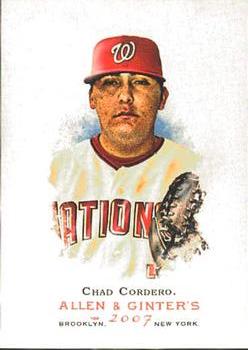 Just as the early years of baseball at RFK Stadium became synonymous with Frank Howard, prodigious home runs and white seats, the ninth inning of the Nationals’ three seasons at RFK regularly summoned “The Chief,” Chad Cordero, in hopes of another save.13 Today was such an occasion. Barry Svrluga of the Washington Post captured the moment and fan reaction. “That left it to the human heartburn that is Cordero. Back in 2005, he got the Nationals’ first save at RFK, nailing down a victory for Livan Hernandez on the night baseball came back. So many in the crowd had been pulled in so many directions by Cordero’s hair-pulling outings over the past three years, it was somehow appropriate he allowed the Phillies to get to 5-3 on Aaron Rowand's single, bringing the winning run to the plate with one out.”14 No problem. Wes Helms and Jayson Werth struck out swinging and Cordero’s 36th save of the season was secured.

The game’s last out brought fireworks against a late-afternoon blue sky and the traditional and orderly postgame fist-bumping victory line of Nationals players, coaches and manager Frank Robinson.15 Postgame festivities were well organized and included digging out home plate and removing it for placement at the new Nationals Park.16 The scene stood in marked contrast to what happened at the Senators’ last game at RFK, in 1971. Povich had captured that madness and utter chaos. “It got as far as two out in the ninth, the Senators’ 7-5 lead intact, no Yankee on base, when one young rebel from the stands set off again,” Povich wrote. “He grabbed first base and ran off with it. Some unbelievers, undaunted by the warning of forfeit, cheered, and from out of the stands poured hundreds, maybe a couple of thousand fans. They took over the infield, the outfield, grabbed off every base as a souvenir, tried to get the numbers and lights from the scoreboard or anything else removable, and by their numbers left police and the four umpires helpless to intervene. … The Senators were finished, even if the ball game wasn’t.”17 The game went into the record book as a forfeit, Yankees 9, Senators 0!

There was now one week to go in the 2007 season and the Nationals played a significant role in the outcome of the NL East race. They went into Shea Stadium and swept a three-game series from the Mets before losing two in the three-game season-ending series at Citizens Bank Park against the Phillies.18 For the Nationals to finish with a 73-89 record and fourth place in the NL East was considered an unqualified success by Wood. He noted that during spring training, a number of national baseball writers had predicted that the Nationals would be historically bad, with one even suggesting they would lose 130 games and erase the 1962 New York Mets (40-120) from the record book.19

Meantime, the Phillies won the division by one game over the Mets to start a five-season streak of postseason play. For the Nationals and their fans, that type of success remained their dream and their goal.

Sitting high above the game in Section 514 as a relatively recent Washingtonian baseball fan, I accepted the passing of an aging baseball venue and eagerly anticipated what the 2008 season would bring. From a native Washingtonian perspective, Phil Wood spoke for many: “The thought of a baseball-only venue in the District was like a gift to those of us who had endured 33 years in the wilderness.”20 The very next game in Washington, Opening Night 2008 at Nationals Park capped by Ryan Zimmerman’s dramatic walk-off home run, would begin the next chapter of local baseball history. For this afternoon, a victory over the Phillies would do just fine!

The author accessed Baseball-Reference.com for box scores/play-by-play information (baseball-reference.com/boxes/WAS/WAS200709230.shtml) and other data, as well as Retrosheet.org (retrosheet.org/boxesetc/2007/B09230WAS2007.htm). Photos are courtesy of the author and The Topps Company.

1 Since its opening in 1961 as DC Stadium and subsequently renamed in 1968, RFK Stadium served as home for the Washington Redskins until 1996 and for the expansion Washington Senators until their fateful relocation to Texas after the 1971 season. Since 1995, it has also been the home of DC United, the Major League Soccer franchise.

6 On December 4, 1964, Frank Howard was traded by the Los Angeles Dodgers with Ken McMullen, Phil Ortega, Pete Richert, and a player to be named later (Dick Nen) to the Washington Senators for John Kennedy, Claude Osteen, and $100,000.

11 Hanrahan’s start on this day would be the last of his major-league career. He pitched exclusively in relief for the Nationals until they traded him to Pittsburgh in June 2009. With the Pirates, he flourished, particularly in 2011 and 2012, when he totaled 76 saves (100 saves for his career) and was named to the National League All-Star team in consecutive years.

12 Mike Bacsik will be forever remembered for what happened on August 7, 2007, in a Nationals victory over the San Francisco Giants at AT&T Park. Barry Bonds hit his 756th career home run off Bacsik to break Hank Aaron’s record.

13 Cordero had a career-best 2005 season with a 1.82 ERA and led the major leagues with 47 saves. He was an All-Star selection for the National League and struck out his only batter, Iván Rodriguez, in the Comerica Park game. Although his performances in 2006 and 2007 didn’t match his singular 2005 season, he nonetheless made history on June 12, 2007. With his ninth save of the season, against the Baltimore Orioles, the 25-year-old Cordero became the second youngest player in baseball history to reach 100 saves in a career. (Bill Ladson, “Cordero second fastest to 100 saves,” MLB.com, June 13, 2007, accessed August 3, 2017, m.mlb.com/news/article/2023114//. Francisco Rodriguez pitching for the California Angels at the time is the youngest at 24 years and 246 days old.).

15 Photograph taken by the author and used for this essay with consent.

18 In the Nationals victory, Chad Cordero earned his 36th save. The next week, he finished a game in Philadelphia for his 37th save of the season and the final one of his career, which was slowed by a labrum tear that required surgery in 2008.