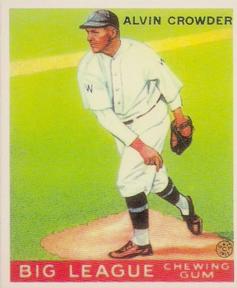 As Alvin “General” Crowder took the mound at Griffith Stadium on September 25, the game was of little consequence.

The American League had long been decided. The New York Yankees had clinched the pennant more than two weeks earlier, leaving Connie Mack’s Philadelphia Athletics and Walter Johnson’s Washington Senators in a fight for second as the teams squared off three times to close out the season.

That drama was dispelled swiftly. Philadelphia claimed an 8-4 win in the series opener, bumping its record to 94-58, ensuring that the Athletics would end the season in second and the Nationals, whose record fell to 91-60, would finish in third.1 The Senators claimed the second game in Philadelphia’s Shibe Park before the teams traveled to Washington to play the season finale.

Standing in Foxx’s way, however, was a National who had his own personal statistical achievements at stake in the contest: General Crowder.

The 33-year-old right-hander was amid the most remarkable stretch of his surprisingly young career. Crowder had struggled to find a consistent role in Washington’s starting staff after beginning his major-league career at the age of 27, then found greater success with the St. Louis Browns. Crowder hurled 21 wins in 1928 and seemed to be establishing himself as a reliable moundsman. But a rough start to the 1930 campaign landed him back in Washington, traded with Heinie Manush for legendary Senators left fielder Goose Goslin.

The rough start to the season had rendered Crowder’s pitching competence almost an afterthought, with his manager, Walter Johnson, offering only the slightest of praise, stating, “Crowder, too, should help us, but I was confident that my pitchers would have delivered without any more help and practically all of my enthusiasm over the trade has to do with the acquisition of Manush.”4

Even as recently as July 28, Crowder’s performance might have done little to cajole greater enthusiasm from the skipper, with Crowder’s record an unexceptional 11-13.

But since July 28, Crowder had not lost a game. He had notched 14 straight winning decisions and won all seven of his September appearances, bringing him to a tie with the Athletics’ Lefty Grove for the American League lead in wins with 25 and still only 13 losses. With Grove’s season over, the job of opposing Crowder fell to Sugar Cain, a rookie right-hander who had made only five career starts. The Athletics’ lineup reflected the game’s lack of significance, with star catcher Mickey Cochrane on the bench, replaced by Ed Madjeski, a rookie with 31 at-bats in his career.

Crowder began the game effectively, retiring the Athletics in order on two groundouts and an infield popup to the Nationals’ budding star shortstop Joe Cronin.

In the bottom half, the Senators’ 42-year-old leadoff hitter, Sam Rice, extended his hold on the franchise’s all-time hit lead by greeting the Athletics’ rookie hurler with a single to center.5 The future Hall of Famer was erased by the Nats’ John Kerr sending a double-play ball to shortstop.6

Cain found himself back in trouble, allowing back-to-back singles to center field to Carl Reynolds and Cronin, putting runners on the corners with two outs.7 First baseman Joe Kuhel then lined a single to left to drive home Reynolds. Cain retired Sam West on a groundout to second, fortunate to have allowed only a single run.

That 1-0 deficit proved significant as the Athletics struggled to muster offense against Crowder. Only Foxx found much success off the righty, reaching in each of his first three plate appearances with two singles and a walk, erasing any real drama over a possible home-run record by reaching only first base in the second inning.

The Nationals nearly scored an unearned run in the sixth. Cronin reached on a two-base throwing error by Athletics shortstop Eric McNair. Kuhel followed with a drive to left, but was “robbed” of a potential run-scoring hit with a “fine catch” by Al Simmons.8

Besides Foxx’s singlehanded efforts, the Athletics mustered only three baserunners in the second through seventh innings, on singles by Dib Williams, Simmons, and Cain.

The Athletics began the eighth with Williams at the plate, and Foxx, four batters behind him, was assured at least one more plate appearance in the contest.

Crowder’s dominance ensured that Foxx’s at-bat waited until the ninth. The Athletics failed to even get the ball out of the infield, let alone even the score, with Crowder inducing Athletics batters to pop out to third base, foul out to catcher, and pop out to shortstop.

Cain had bounced back since a rough first, allowing only a pair of singles to West and Roy Spencer after the first. Again, however, Cain struggled with Sam Rice, walking him to lead off the eighth inning. Possibly motivated by the still-narrow score, his earlier double play, or both, Kerr advanced Rice to second with a sacrifice bunt to first base. Reynolds failed to advance him any further, flying out to left.

While Crowder was three outs from the American League’s win crown, his task remained formidable, even with the insurance run. The Athletics brought two of the league’s best sluggers in Simmons and Foxx against him in the ninth; the pair had already reached base four times against him.

Crowder made quick work of the drama, however, inducing Simmons to fly to right, ensuring that not even the mighty Foxx could tie the game. With the lead no longer on the line, the crowd, an “enthusiastic gathering of about 8000,”11 offered applause to Foxx as he came to the plate still working toward a possible batting crown.12

Foxx drove Crowder’s second pitch to him high into the left-field stands for his 58th home run.13 But it was too little. Crowder retired the next two Athletics without incident and brought the 1932 season to a remarkable close.

It was, in many ways, a game of near-misses. The teams landed in second and third, behind the eventual World Series-winning Yankees. Foxx fell just shy of Ruth’s record. Crowder’s 15th consecutive win ended his season one win shy of the American League record of 16 consecutive victories held by four hurlers, including his own manager.14 Moreover, the game itself was played at a “near-record” pace, taking only 77 minutes from start to finish.15

Crowder’s 15 consecutive victories vaulted him to his first American League win crown, although he tied for the lead for the pennant-winning Senators the next season before declining and being dealt to the Tigers in 1934. For his part, Foxx was described both as the junior circuit’s batting champ and runner-up, depending on the source.16 Ultimately, Dale Alexander was named batting champ, while Foxx was voted American League MVP.17

The game also ended the 25-year connection between the club and franchise legend Walter Johnson, who was ousted as manager on October 5.18 Johnson ended his managerial tenure with Washington at a record of 350-264, but faced criticism from hometown fans for not achieving more vaunted success with a talented roster19 and by critics for lacking “the temperament to fire his men with the same enthusiasm” as former manager Bucky Harris did. Others speculated that the firing was financially motivated, permitting Clark Griffith the opportunity to save Johnson’s $20,000 salary by extracting the same work from a player already on the payroll.20

Griffith did nothing to dispel this notion by hiring his star shortstop Cronin to manage the club on October 8.21

In addition to the articles cited in the notes, the author consulted:

3 Under the current official baseball rules, Alexander would not have qualified for the title, notching only 454 plate appearances (392 at-bats) over the 154-game season. img.mlbstatic.com/mlb-images/image/upload/mlb/ttajxpedgemiy4sx0cer.pdf.

4 Frank H. Young, “Manager Sees Pennant with New Punch,” Washington Post, June 15, 1930. Young was slightly more charitable to Crowder, stating “[p]ractically every one with whom the writer has talked agrees that the Nationals would not have gotten any the worst of it had they obtained Manush alone for Goslin and the fact that President Clark Griffith was able to land Crowder, too put the Washington Club owner back in the ‘Old Fox’ class.”

13 Foxx had, in fact, hit 60 home runs over the course of the 1932 season, but two of them were hit in games that were ultimately canceled as a result of rain before the games became official. Tom Deveaux, The Washington Senators, 1901-1971 (Jefferson, North Carolina: McFarland & Company Inc., 2001).