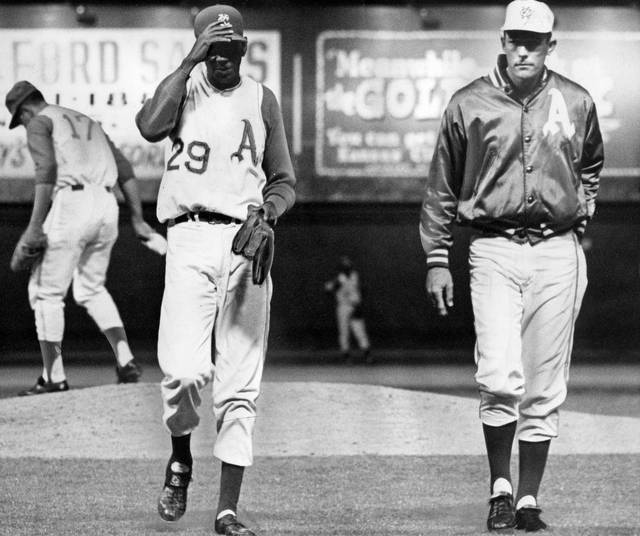 Fans were treated to a piece of history when Satchel Paige “flaunted Father Time”1 and took the mound for the Kansas City Athletics in a game against the visiting Boston Red Sox. It had been almost 40 years since Leroy Robert Paige pitched his first game in professional baseball and 12 years since he last threw a pitch in the majors, with the St. Louis Browns.2 On September 25, 1965, “Paige seemed as old as baseball itself when he shut out the hard-hitting Boston Red Sox for three innings.”3

Kansas City had been struggling for many seasons. Since the A.L. expanded to ten teams in 1961,4 the Athletics had finished in eighth place once, ninth place twice, and tenth (last) place once. It had been more than 30 years since the Athletics’ 1929, 1930, and 1931 World Series seasons. They had not enjoyed a winning campaign since 1952, when the team still played in Philadelphia.

Attendance was perennially poor, last in the league or close to last. In 1965, Kansas City would draw only 528,344 fans, the lowest in the 11-year history of the franchise.5 On September 23, only 690 faithful fans came to Municipal Stadium to see a walk-off victory over the Washington Senators.

Athletics owner Charlie Finley cooked up a plan to boost attendance by hosting a Satchel Paige Night at the ballpark. Paige was more than a star in Kansas City; he was considered a living legend after pitching for the Kansas City Monarchs in the Negro Leagues (1935, 39-47). Finley thought up the publicity stunt to attract spectators, but he went one step further; he announced that Paige would actually pitch in the game. Paige signed a contract6 on September 10, and the terms included a check for “the princely sum of $3,500.”7 When Finley asked the right-hander whether he could pitch three innings, Paige responded with, “That depends. How many times a day?”8 When asked about his age, he told the press, “I think I can still pitch and help this club. So what difference does it make what my age is if I can?”9

The A’s organization made this into a big deal, inviting former stars from the Monarchs and Kansas City Blues (a former minor-league team in the American Association) to a luncheon. There was even a three-inning exhibition game before the A’s-Red Sox contest. According to the Kansas City Star, Buck O’Neil, Hilton Smith, Cool Papa Bell, and Bullet Rogan showed up.10

Before the game, “Paige sat in the bullpen in a rocking chair while a nurse rubbed liniment into his pitching arm for the entire crowd to see.”11 The old wooden rocking chair was then moved into the home team’s dugout, which was below field level. The famous pitcher rocked away while the A’s batted. This added to the stunt, and as Paige said, “At my age, I’m close enough to being below ground level as it is.”12

The Red Sox sent up four batters in the first. Leadoff hitter Jim Gosger popped out, while Dalton Jones reached second base on an error but was out trying to advance to third on a ball in the dirt. The only hit off Paige was a double by Carl Yastrzemski, “an All Star who led the league in doubles that season and had seen his father hit against Satchel a generation earlier in a semipro game on Long Island.”13 But Yaz was left stranded as Tony Conigliaro flew out to left after Paige got him “to bite at his famous hesitation pitch.”14

In the Kansas City first, Jose Tartabull (the father of future MLB slugger Danny Tartabull) singled with one out, advanced to second on a Wayne Causey groundout, and scored when Bryan singled. So, his A’s teammates had staked Paige to an early lead.

Paige retired the Red Sox in order in the second and third frames. The rubber-armed hurler needed just 28 pitches to get through ten batters in three innings. Billy Bryan, the Kansas City catcher, described Paige’s pitching thusly: “He threw slow, then he threw slower, and he just kept getting outs.”15

Paige went out to the mound before the beginning of the fourth inning to take his warm-up tosses. He had handled the Red Sox almost perfectly once through their line-up. Maybe not surprisingly, when A’s manager Haywood Sullivan strolled out to take the ball, calling for Diego Segui to provide relief, the crowd began booing loudly. Once Segui met Paige on the mound, the two pitchers shook hands and Paige walked toward the dugout.

The fans erupted into applause and cheers, giving Paige a standing ovation. Kansas City radio announcer Monte Moore painted the picture “Twice he doffed his cap to the crowd here and actually bowed to them,” he said. His broadcast partner Red Rush added, “Whether he is 23, 53, 63, or 73 as some say, he really showed a lot of people that he still has that ol’ love of the game.”16 When Paige left the field, “The lights in the stadium were then turned off, matches were lit, and the 10,000 in the stands sang a salute,”17 The Old Gray Mare, led by the PA announcer.

Paige pitched three innings, gave up one hit, no walks, no runs, and struck out Boston pitcher Bill Monbouquette. Following the game, Segui remarked, “If I tell you the truth, I never expected to see what I saw that day. You don’t think a guy that age, he’s got all this gray hair, and he’s getting everybody out? You don’t expect that.”18

After Paige departed, Kansas City added a tally in the bottom of the sixth when Bryan doubled and Dick Green singled him home. Boston, though, began a furious comeback in the seventh. Lee Thomas belted a two-run home run off Segui to tie the game 2-2. The Red Sox scored three times in the eighth, highlighted by Conigliaro’s inside-the-park home run to center field.

Monbouquette pitched a complete game in earning his tenth victory of the season. The game between the ninth-place Red Sox and last-place Athletics did not affect the standings, but Finley’s scheme succeeded, “and not just by quadrupling the attendance from the day before.”19

With all the hype and advertisement, 9,289 fans came to the stadium to watch the immortal Paige. Years later, Independence, Missouri, native and future Cy Young Award winner Rick Sutcliffe told the Kansas City Star, “I was there in the bleachers and I’m quite sure that had something to do with me wanting to be a baseball player.”20 Paige, “the ageless wonder,”21 showed he still had his stuff, and the fans went home happy to have witnessed his pitching. In 1971, Paige became the first former Negro League player elected to the Hall of Fame.

This event came less than three weeks after another Finley publicity stunt. On September 8, Bert Campaneris became the first major leaguer to play all nine positions in the same game.22 The Athletics lost to the California Angels in 13 innings, but 21,576 fans showed up to watch. Unfortunately, the A’s finished the 1965 season with a 59-103 won-loss record, 43 games out of first place, and in dead last.

2 Paige was released from the St. Louis Browns/Baltimore Orioles on February 2, 1954.

4 Charlie Finley bought a controlling interest in the team in December 1960, which made him the team’s owner during this five-year expansion period.

16 Taken from an audio clip that is embedded in the online article by Mellinger.

22 See sabr.org/gamesproj/game/september-8-1965-bert-campaneris-plays-all-nine-positions-athletics for a summary of Campaneris’ feat.