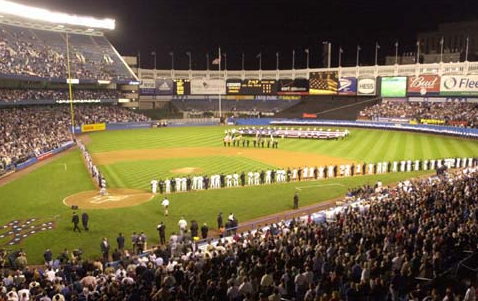 “We hadn’t been to a game all year, and we felt it was important to come and show our support to the economy, but more importantly it will show Americans we can come out to a gathering like this and not be afraid.” — Laura Pritchard, lifelong Yankees fan, September 25, 20011

“You don’t know what to say. You look in their eyes and you see the pain. You see the sleepless nights and the long hours. We started talking about the bad stuff, then we started talking about baseball, about their softball team, how their pitcher gets on them when they make errors.” — Roger Clemens after visiting Engine Company 22 on September 25, 2001, two weeks after the 9/11 attacks2

A large American flag is unfurled on the outfield by SUNY Maritime Academy cadets as the Yankees and Devil Rays are joined by members of the New York City Fire Department, EMS and Police Department during ceremonies honoring the victims of the World Trade Center terrorist attack. (COURTESY OF MLB.COM)

On September 9, 2001, the New York Yankees defeated the Boston Red Sox, 7-2, at Yankee Stadium. Things could not have been better for the Yankees. The defending World Series champions had won four in a row and were leading the American League East by 13 games.

They were scheduled to host Chicago at Yankee Stadium on September 11. That game was postponed, as were all other games in baseball, after America was attacked on the morning of September 11.

The Yankees resumed their season on the road in Chicago on September 18 and did not return home until September 25, an absence of 16 days. Their league lead was 13½ games and the magic number was one. Either a Boston loss or a Yankees win would assure the Yankees their fourth straight division championship and their seventh consecutive trip to the postseason. Whatever mystery there was vanished while Tampa Bay and the Yankees were still playing. Boston lost to Baltimore. Although the game in New York was rendered meaningless (Tampa Bay won, 4-0), the night was dripping in emotion.

Roger Clemens was the Yankees starter. His 20-1 start to the season was the best in baseball history. The right-hander was poised to move into third place on the all-time strikeout list. He had won his prior 16 decisions and a win would break a tie for the American League record for consecutive wins in a season, which he shared with Walter Johnson, Smoky Joe Wood, Lefty Grove, and Schoolboy Rowe. Neither Clemens’s record nor his place on the strikeout list was particularly relevant at the time.

The day was more than a bit sobering for Clemens. On the way from his apartment to Yankee Stadium, he stopped off at Engine Company 22. The coincidence of Clemens’s uniform number being 22 was not lost. Before leaving the firehouse, he was presented with a jacket that he wore as he went to the bullpen for his pregame warmup session.

“That was my dream, being from Boston and with Roger coming up through Boston and to pitch against him.” — Tanyon Sturtze, September 25, 20013

The Devil Rays starter was Tanyon Sturtze (8-12). The wife of a close friend had perished in one of the planes that was crashed into the World Trade Center. Under normal circumstances Sturtze, who hailed from Worcester, Massachusetts, would have thrived on the opportunity to exchange pitches with Clemens, who had started with Boston when Sturtze was a teenager. But the circumstances were such as to dull one of Sturtze’s better performances.

“You can’t help but get distracted by the heroes who are out there on the field — (The heroes weren’t) the people in the baseball uniforms.” — Yankees manager Joe Torre, September 25, 20014

Before the game, there was a 30-minute ceremony. Many in the announced crowd of 33,777 were late entering the ballpark. There was an increased police presence and fans were screened as they entered the ballpark. They had even checked Yankees manager Joe Torre’s bags.

The crowd cheered as Mayor Rudy Giuliani, a lifelong Yankees fan, at the urging of Torre, took his place on the field. Members of the New York Fire Department and Police Department stood along the first- and third-base lines with the players from the respective teams. Taps was played by Branford Marsalis. The Harlem Boys Choir sang “We Shall Overcome,” and joined Michael Bolton in the singing of “Lean on Me.” A stirring rendition of “God Bless America” was offered by tenor Ronan Tynan.

Clemens had a bad first inning. He struck out the leadoff batter, Jason Tyner. Brent Abernathy singled and Clemens, trying to pick him off first base, lost his balance and threw the ball past first base into the stands. Abernathy took second and scored on a single by Ben Grieve. Grieve stole second base and came home on a single by Toby Hall, giving Tampa Bay a 2-0 lead. They would not need any more runs.

In the middle of the third inning, as Tampa Bay took the field, the majestic voice of Yankees public-address announcer Bob Sheppard broke the calm. Spectators were informed that the Yankees would erect a memorial in Monument Park to recognize those who lost their lives on September 11.

Clemens calmed down and in the top of the fourth inning struck out Hall with an 0-and-2 forkball. The ball bounced past catcher Jorge Posada and Hall reached base safely. But Clemens had his sixth strikeout of the game and the 3,702nd of his career, moving him past Bert Blyleven on the all-time list.

The closest the Yankees came to scoring was in the fourth inning, when they loaded the bases on two walks and a single. Sturtze got Posada on a fly ball to right field to end the inning.

The game marked Derek Jeter’s first appearance after taking off a couple of days to nurse a sore hamstring. He grounded out leading off the sixth inning. With two out, Bernie Williams, who had singled in each of his first two at-bats, slammed the ball back at Sturtze. It hit the Tampa Bay pitcher in the face and was deflected in the air to shortstop Felix Martinez.

Clemens left the game in the seventh inning with two outs and runners at first and second. His last out, a strikeout of Tyner, was Clemens’s ninth strikeout of the game and 3,705th of his career. He had allowed three runs and eight hits. Mike Stanton came on and yielded a single to Grieve, bringing home the fourth and final Tampa Bay run of the game. The run was charged to Clemens.

During the break in the middle of the seventh inning, two police officers sang “America the Beautiful.”

Sturtze, shaking off the pain resulting from being hit in the sixth inning, stayed in the game and pitched a scoreless seventh inning before exiting. In the bottom of the seventh, there was news from Boston. The Red Sox had lost to Baltimore, 12-7, and regardless of the outcome in the game in the Bronx, the Yankees had clinched the Division championship. An “F” appeared next to the Boston-Baltimore score, indicating that the game was over. Some of the remaining fans saw the posting of the score and roared their approval. In the top of the eighth inning the announcement was flashed on the large message board and the remaining 10,000 fans joined in the cheering.

Reliever Stanton, who was on the mound when the announcement was flashed in the eighth inning, said, “It’s always tough to celebrate after a loss. Add in the emotions of the day and the pregame festivities, and it was a highly emotional day. Towards the end, guys were drained.”5

“We are in the entertainment business, but for a week there was no entertainment. We’re just like everyone else. Everyone has an inner voice that says, ‘I want to do something.’” — Mike Stanton, September 25, 20016

There was no further scoring, as Victor Zambrano pitched two perfect innings for Tampa Bay to wrap up their 4-0 win. Although the Yankees had clinched the division title, there was not a raucous celebration in the Yankees clubhouse after the game. Everybody just shook hands and went home.

Sturtze summed up everyone’s feelings when he said, “Tonight, I think we were all playing for New York. We may have won the game, but we were all just out there trying to play for the fans of New York.”7

Since September 25, 2001, “God Bless America” has been sung during the seventh inning at every Yankees home game. Every fan has had his bags examined and has been scanned by a metal detector upon arrival.

Nineteen years later, COVID-19 swept the country, with New York being the epicenter of the outbreak. Baseball was put on hold. Branford Marsalis went from playing taps on September 25, 2001, to mourning for his father, who perished from the coronavirus. Even if they had wanted to pay a tribute, the players couldn’t even shake hands.