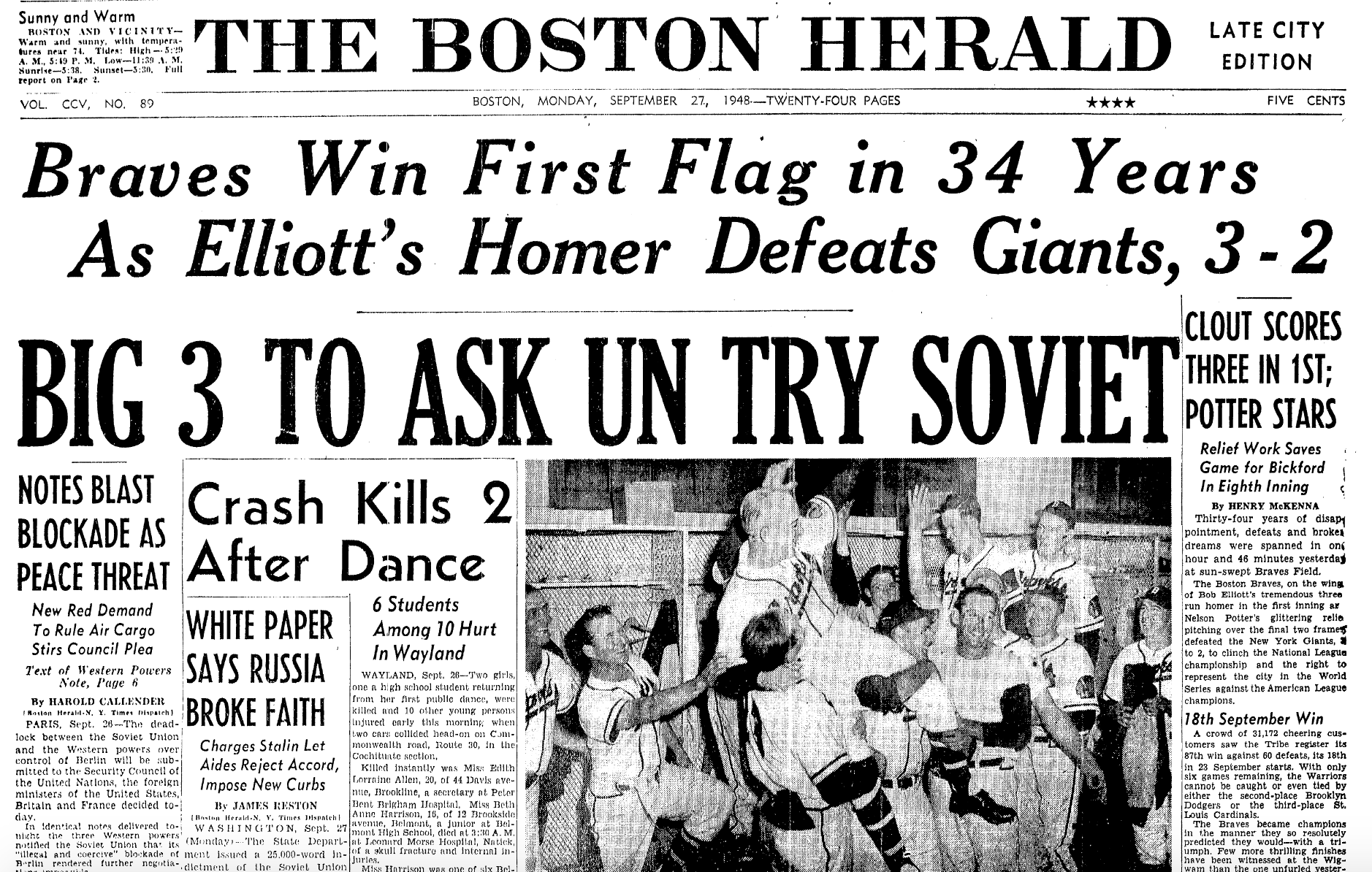 For the first time in 34 years, the National League pennant returned to Boston thanks to Bob Elliott’s 22nd home run, a three-run shot in the first inning. The Braves hung on to defeat the New York Giants, 3-2, before 31,172 jubilant spectators at Braves Field.

Boston manager Billy Southworth celebrated his fourth NL pennant. In his previous managerial stint, Southworth guided the St. Louis Cardinals to three pennants from 1942-44, winning the World Series twice, in ’42 and ’44. After the game, Southworth received a phone call from National League President Ford C. Frick to congratulate the champions.

It was an extra-special occasion for Southworth. As a Braves outfielder from 1921-23, he suffered through two seasons of 100-plus losses, playing in very poorly attended games.1

The Braves clincher took only 1 hour 46 minutes to play, a fast, quick pace to put an end to any thought of the second-place (and former defending champion) Brooklyn Dodgers or third-place St. Louis Cardinals staging a pennant-stealing drive.

The Braves would thus open the World Series, their first since the Miracle Braves of 1914, against the winner of the heated American League race between the crosstown Red Sox and the Cleveland Indians. After the 26th, the Indians held a one-game lead with five games to play.2

Elliott, the 1947 National League Most Valuable Player, delivered one of the most valuable hits in Boston’s 72-year NL history with a high blast to right-center on a 2-1 pitch by Giants starter Larry Jansen (18-12). Scoring on the play were Tommy Holmes and Al Dark, who had both singled. Elliott followed Earl Torgeson at the bat, after Torgeson failed to move the runners, flying out to left.

After Elliott’s blast, the game settled into a pitchers’ duel, Jansen settling down to keep the Giants in it by holding the Braves scoreless on two hits from the second on, while Braves starter Vern Bickford (10-5) shut down New York until the eighth, when the Giants attempted a comeback.

“I had the best stuff I had all year,” said the jubilant winning pitcher. “I didn’t tire, I never lost my stuff, they just got a couple of lucky hits.”3

Bickford carried a two-hitter into the eighth when the Giants started swinging. Giants rookie left fielder Don Mueller singled to left and a fellow rookie, catcher Sal Yvars, singled over second to put two men on and raise Southworth’s nerves a bit. As Nels Potter and Warren Spahn started to warm up in the Boston bullpen, former Brave Jack McCarthy was sent up by Giants manager Leo Durocher to pinch-hit for Buddy Kerr. McCarthy responded with a lazy single to center. Mueller scored and Yvars went to third. The shutout was broken. Hal Bamberger ran for McCarthy. Another pinch-hitter, Lonny Frey, batted for pitcher Jansen.

Southworth had seen enough. With a runner on third and the tying run at the plate, he brought in Potter. Frey grounded a 0-1 pitch to shortstop Dark, who got the ball to second in time to force Bamberger. But Yvars crossed the plate and brought the Giants to within a run. The score was 3-2 in Boston’s favor.

Potter got Jack Lohrke to ground to Elliott, who forced Frey at second. Lohrke reached first, then ran all the way to third base when Potter threw wild to first in an attempt to pick him off. 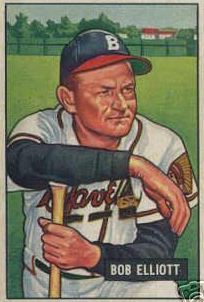 Potter next faced Whitey Lockman and walked him on four pitches, putting runners on first and third with two out. Lockman then stole second to make matters closer. But the threat ended when Sid Gordon grounded a 2-and-1 pitch to Elliott, who threw him out at first, to the great relief of Braves fans.

After the Braves went down in order in the bottom of the eighth, it was up to Potter to seal the deal and secure the pennant. The Giants had Johnny Mize, Willard Marshall, and Mueller coming up, each hoping to extend the game, or postpone the celebration another day.

Potter wasted no time. It only took four pitches to bring the pennant home. Mize grounded to second, Sibby Sisti making a fine throw to first. Marshall popped a one-ball pitch to second, Sisti again in the middle of it all by making the catch on the edge of the outfield. With two down, the crowd now anticipated what had never been imagined back on Opening Day, a pennant of their own. It was up to Mueller, who had singled to begin New York’s rally in the eighth. This time it was not to be: Mueller tapped the first pitch back to Potter, whose light toss to first clinched Boston’s 87th win and set off a wild celebration by the crowd, players, and management alike. The 1948 National League pennant race was over with the Boston Braves finishing on top.

For several minutes after the final out, the many fans who stayed saluted each player as the Braves left the field to continue their own celebration in the clubhouse. The celebration included champagne flowing and players carrying Southworth around the locker room on their shoulders. The party lasted all night and probably would continue for days to come as the Braves hit the road to Brooklyn and New York for their final six games while leaving the front office the joyous task of assembling the order of World Series tickets. They waited to see who they would face in the American League, perhaps even their neighbors, the Red Sox.

After 34 years of anguish, disappointments, and losing seasons, the Braves were on top of the National League mountain, a mountain whose climb began in 1915 and ended in the grandest fashion.

Not long after the game, Braves president Lou Perini announced that all surviving members of the 1914 “Miracle” world championship team, a team that went from last place on July 4 to proud pennant winners followed by a just-as-miraculous World Series sweep of the powerful American League titlist Philadelphia Athletics, would be invited to attend the World Series as guests of the club. The first to hear of this was Hank Gowdy, the catcher for the Miracle Braves, who as fate would have it was coaching for the Giants at Braves Field that day when his former team won the championship.

Box scores for this game can be found on baseball-reference.com and retrosheet.org at:

2The Red Sox and Indians finished the regular season with identical 96-58 records. In the first one-game playoff in American League history, Cleveland defeated Boston, 8-3, to advance to the World Series against the Braves.