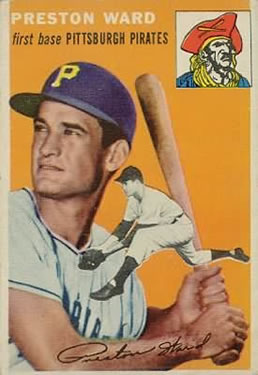 The 1953 season was a tough one for both the Pittsburgh Pirates and the New York Giants. For the Pirates, it was yet another losing season in a post-World War II era that Pittsburgh fans would like to forget. In the 12 seasons from 1946 through 1957, the Bucs endured 11 losing campaigns, including seven last-place finishes. The 1953 season met both criteria for the Pirates.

Branch Rickey became the Pirates general manager after the 1950 season, following historic tenures with the Cardinals and Dodgers. Rickey’s plan to rebuild the Pirates followed the same formula he had previously used in St. Louis and Brooklyn — to build the farm system and trade his star players for young talent.

The biggest star in Pittsburgh by far was slugger Ralph Kiner, who led the National League in home runs every year from 1946 through 1952. Kiner was one of the highest-paid players in the game, once boasting that “home run hitters drive Cadillacs and singles hitters drive Fords.”1 However, after the Pirates finished the 1952 season with a dreadful 42-112 record, Rickey cut Kiner’s pay even though Kiner led the league in homers. The Mahatma reasoned, “[W]e can finish last without you.”2

Rickey wanted to trade Kiner, but the Pirates ownership wouldn’t allow it since Kiner was their star attraction. As bad as the Pirates were, they managed to draw over a million fans every year, largely to see the slugging Kiner. However, attendance plummeted to 686,673 in 1952 and 572,757 in 1953. Rickey then had leverage to trade Kiner and on June 4 he sent the slugger to the Cubs along with Joe Garagiola, George Metkovich, and Howie Pollet in exchange for Bob Addis, Toby Atwell, George Freese, Gene Hermanski, Bob Schultz, Preston Ward, and $150,000.

The 1953 season was a losing one for the Giants as well. Unlike the Pirates, however, this was in the midst of a four-year stretch in which the Giants had three 90-plus-win seasons, won two National League pennants, and won one World Series title. But the Giants couldn’t recover from the loss of Willie Mays to military service and finished the 1953 season with 22 fewer wins than in 1952.

On September 27 the Pirates took the field in front of a crowd of 17,367, a pretty decent showing for a meaningless game between two teams with losing records. Forbes Field at the time had a capacity of 34,249. The Pirates had added 519 seats to the ballpark in 1953. After the ’53 season, the Pirates removed “Kiner’s Korner” in left field and restored the outfield to its previous dimensions: 365 feet in left field and 406 feet in left-center field, making it once again one of the most difficult stadiums in which to hit home runs, particularly for right-handed hitters.

The home team had Preston Ward at first base, part of the package the Bucs received from the Cubs for Ralph Kiner. Light-hitting Dick Hall was at second base. For the first three years of Hall’s career the Pirates struggled to find a position for him. In 1955 Hall began to pitch, and he flourished on the mound for 16 years, appearing in 495 games and compiling a respectable 3.32 earned-run average. Rookie reserve Dick Smith was at shortstop and slick-fielding Danny O’Connell was at third. O’Connell had the best range of all NL basemen in 1953.

Cal Hogue was the starting pitcher for the Bucs. Hogue struggled to find the strike zone during his brief three-year career in the big leagues as he walked 96 batters in 113⅔ innings. Hogue’s batterymate was Mike Sandlock, who had made his return to the majors after a six-year absence. This was the final big-league game for the shortstop-turned-catcher.

Patrolling the outfield from left to right were Hal Rice, the young slugger Frank Thomas, and Cal Abrams, whose 12 assists led all NL right fielders in 1953.

Leading off for the visiting Giants was Alvin Dark, who was not playing his usual position, shortstop, but was pitching — the only time he took the mound in the major leagues. Two-time All-Star Don Mueller batted second and played right field. Batting third and playing third base was Hank Thompson, who cracked 24 homers in 1953. Hitting cleanup was centerfielder Bobby Thomson, who led the Giants with 26 home runs. Playing left field and hitting fifth was Dusty Rhodes. First baseman Tookie Gilbert, 24, batted sixth and — like Pirates catcher Mike Sandlock — was also making what proved to be his final big-league appearance. Rounding out the lineup were second baseman Bobby Hofman, shortstop Daryl Spencer, and catcher Sam Calderone.

The Giants drew first blood in the top of the first when Dark reached on an error by Danny O’Connell and scored on a single by Bobby Thomson. In the bottom of the first, Dark gave up a one-out walk to O’Connell, then retired Hal Rice, whereupon slugger Frank Thomas cracked his 30th home run of the season to give the Pirates a 2-1 lead.

Rookie right-hander Ruben Gomez relieved Dark in the second inning and Dark moved to third base. Known as “El Divino Loco” (The Divine Madman) in his native Puerto Rico, Gomez became the first Puerto Rican to start a World Series game (Game Three of the 1954 World Series) and be on a World Series champion.

Gomez cruised through the next three innings until the fifth, when Mike Sandlock smacked a one-out single and advanced to second on a sacrifice bunt by Cal Hogue. A Dusty Rhodes miscue in left field allowed Sandlock to score an unearned run and gave the Pirates a 3-1 lead.

Cal Hogue couldn’t protect the lead, though, surrendering back-to-back solo home runs to Bobby Hofman and Daryl Spencer that tied the game at 3-3.

With one out in the bottom of the eighth the Pirates regained the lead on a solo shot by Cal Abrams. Once again Hogue coughed up a lead when he walked Wes Westrum (who had taken over at third base for Al Dark in the third inning) and wild-pitched Westrum to second. Dick Smith’s error put runners at the corners. Bobby Thomson’s single to left field scored Westrum and knotted the game again.

Al Corwin relieved Gomez in the bottom of the ninth and gave up a leadoff single to Frank Thomas. This set the stage for Preston Ward. The first baseman smacked a Corwin offering into the Forbes Field bleachers, giving the Pirates their 50th win of the season.

This article originally appeared in “100: The 100 Year Journey of a Baseball Journeyman, Mike Sandlock” (SABR, 2016), edited by Karl Cicitto.

1Mike Axisa, “Ralph Kiner’s Greatest Quotes,” February 6, 2014. Retrieved from CBS Sports: cbssports.com/mlb/eye-on-baseball/24433569/video-ralph-kiners-greatest-quotes. This quotation has also been attributed to Fritz Ostermueller and others.