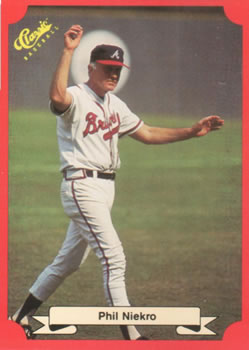 Unless they announce their retirement in advance, very few players know how and when their career will end. After more than a quarter-century in their organization, Phil Niekro always assumed he would play out his career with the Braves, the only team he had ever known. But things didn’t exactly work out the way he thought they would, however.

After their somewhat magical division-winning season in 1982, the Braves ended the 1983 season three games behind the Dodgers. At age 44, Niekro dropped from a 17-4 record to 11-10. His 201⅓ innings pitched were the fewest for a full season in his career. The sentiment by many in the organization was that Phil had reached the end of the line.

The headline in the Atlanta Constitution five days after the season ended screamed, “Niekro Leaving Braves.” Sports editor Jesse Outlar wrote, “When (Joe) Torre came back to manage the team that Niekro also would have liked to manage, there was speculation of friction. Though Niekro resented being pulled in the late innings by Torre, there was no verbal clash between them.”1 The next day, Chris Mortensen wrote, “Niekro confirmed that he had been encouraged to retire. It was primarily the decision of Torre and Bob Gibson, his pitching coach.”2 However, “(Ted) Turner, a longtime booster of Niekro, responded by telling the pitcher he could return as a player. ‘Ted told me that he has overridden his decision-makers before,’ Niekro (said). ‘I’m not going into spring training holding Ted Turner’s hand, pitching under his shadow. I can’t go back to the Braves under those conditions.”3

“In brief, the Braves wanted me to retire, but I want to pitch another season or so,” Niekro told Mortensen.4

Years later, Niekro related, “I was born a Brave, and I wanted to die a Brave. I had my mind set on that. And that was the longest damn day I had in my life. The most depressed day in my life was that day.”5

But with 268 wins behind him, Phil felt that 300 was within his reach, especially since he thought he still had two or three years left. He was right. In early 1984, he signed with the New York Yankees and posted two 16-win seasons there, with his final Yankee win being the 300th victory of his career.

Moving on to the Cleveland Indians, near his boyhood Ohio home, Niekro added another 11 wins in 1986. The Tribe’s fortunes fell off in 1987, however, and on August 9 Niekro was traded to the Toronto Blue Jays. He was back in a pennant race! Things didn’t work out well for him with the Jays, however, as he took two losses in his three starts with the team, and he was released on August 31.

“They’re in the pennant drive,” said the right-handed knuckler. “That’s the third time I’ve been released, so it’s nothing new. I just didn’t do the kind of job that I’m capable of.”6

Writers around the country paid tribute to Niekro, most surmising that his career was over, and that he never got a shot at the World Series. Syndicated columnist Jim Murray wrote: “The nice thing about Phil Niekro is, he doesn`t look his age. He looks much older. A writer once noted that Phil is 48 but you`d never know it. He could easily pass for 59. As pitchers get older, they lose velocity on their fastballs. For Phil Niekro, no problem. His fastball never had any velocity to begin with.”7

In Atlanta newspaper columnists, radio talk shows, and fans in general wondered if there was a chance that the Braves might sign Niekro, giving him a chance to actually finish his career with his original team. After all, on September 1 the Braves were mired in fourth place in the NL West Division, 13 games out of first place. Rejoining the Braves was exactly the way Niekro wanted to finish his career, but he was confused and a bit hurt by some of the negative reception that the idea received in the press. Several writers expressed the opinion that Niekro couldn’t really help the team, and that the Braves would be better served by a (much) younger pitcher getting September experience in the rotation.

After discussions with the Braves wavered back and forth for about two weeks, on September 23 the team announced that it had signed Niekro to a $1 contract, and that he would start the final home game of the season. Gerry Fraley of the Atlanta Constitution wrote: “Niekro was signed for the final week of the season, with plans to pitch Sunday and will make the final road trip of the season.”8

On Sunday afternoon, September 27, 1987, the Braves unretired jersey number 35, and Phil Niekro took the mound against the San Francisco Giants, who were in first place by seven games with eight games left to play.

In the top of the first inning, Niekro got two quick outs on fly balls by Eddie Milner and Kevin Mitchell. Then he walked Mike Aldrete, Will Clark, and Chili Davis before Bob Brenly lined out to third, to end the inning. In the bottom of the inning, the Braves managed a hit, a stolen base, and a walk, but failed to score. Niekro gave up one hit in the second inning, and a hit and a walk in the third, but held the Giants scoreless.

In the bottom of the third, Niekro led off the inning, his first plate appearance since he left the Braves four years before. He grounded sharply to shortstop Jose Uribe, who muffed the throw, with Niekro quickly taking second on the play. He advanced to third on Albert Hall’s hit, and then Ken Oberkfell grounded to second baseman Robby Thompson, Niekro broke from third on the play, and was thrown out at home — his biggest baserunning adventure since 1983. The Braves went on to score five runs in the inning, sending Niekro back out for the fourth inning with a 5-0 lead.

Whether or not all that baserunning took something out of Niekro is something we’ll never know. He gave up a leadoff double to Thompson, then a single to Uribe, scoring the Giants’ first run. Pinch-hitter Dave Henderson walked, and Eddie Milner’s single to right loaded the bases. Niekro then walked Kevin Mitchell.

Manager Chuck Tanner had decided before the game that he would go with Niekro as long as he could and give him every possible chance to win, but he would not let Phil get in a position to lose the game. With the Braves ahead 5-2, but with the bases full of Giants and no outs, Tanner came out of the dugout and made his way to the mound. Niekro protested, and did his best to talk his manager into letting him stay in, but to no avail. Tanner signaled to the bullpen for lefty reliever Chuck Cary. As Cary came in, Tanner and Niekro walked from the mound, with the loudspeakers playing a hit record from Phil’s rookie season, A Summer Song, by Chad and Jeremy:

When they reached the foul line, Tanner continued to the dugout while leaving Niekro on the field to watch a career highlight film that the Braves had prepared for the event. Niekro then walked off the field to a long and loud standing ovation, knowing that he had finally ended his career as an Atlanta Brave.

After play resumed, Giants manager Roger Craig sent right-handed-hitting Candy Maldonado up to hit for Mike Aldrete. On one of Cary’s first offerings, Maldonado hit a long line-drive home run into the seats in left-center field. Giants 6, Braves 5. Atlanta managed only one more run that afternoon, while the Giants took batting practice. The final score was 15-6, and Chuck Cary was the losing pitcher, his only loss in two seasons with the Braves.

The next day the Atlanta Journal-Constitution quoted Niekro: “I’m not embarrassed by getting beat around. I’ve done that before. The most important thing was to wear the (Braves) uniform again.” Niekro’s wife, Nancy, added, laughing, “I told everybody to get (to the ballpark) real early today, because I was afraid they might miss him.”10

Niekro’s career had come to an end. His 318 wins were 13th on the all-time list, he was in third place with 716 games started, and his 5,404 innings pitched put him in fourth place, behind only Cy Young, Pud Galvin, and Walter Johnson.

In addition to the sources cited in the Notes, the author used box scores at Baseball-Reference.com and Retrosheet.org.