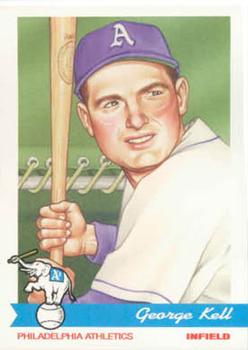 The Philadelphia Athletics were in the cellar of the eight-team American League on September 27, 1943. The team began the season with a 27-26 record but fell to last place by winning only 20 of its next 94 games. Connie Mack, the Athletics’ 80-year-old owner-manager, acquired some new talent for his faltering club, and on Tuesday, September 28, 1943, he fielded an all-rookie lineup against the St. Louis Browns at Shibe Park in Philadelphia. “It was Mack’s custom to take a look at players he had just bought or promoted from the minors toward the end of the season,” said Mack’s biographer, Norman Macht.1

Rounding out Mack’s all-rookie lineup were pitcher Lou Ciola, a 21-year-old right-hander from the University of Richmond (Virginia) making his third major-league start; shortstop Irv Hall from the Williamsport (Pennsylvania) Grays of the Eastern League; and Frank Skaff, a 32-year-old first baseman who had had a “cup of coffee” (11 at-bats) on the 1935 Brooklyn Dodgers.

The sixth-place St. Louis Browns were managed by Luke Sewell, who chose “Big Al” Milnar, a 29-year-old southpaw, to pitch to Mack’s rookies on September 28. It was a day game with attendance reported to be 1,082 by the Philadelphia Inquirer (1,450 according to Retrosheet.org).

In the first inning, Flick singled in his first major-league at-bat. Kell’s first major-league at-bat was unlucky: His “smash bounced off Milnar’s glove to [shortstop Vern] Stephens who threw him out.”3 Flick advanced to second base on the play and came home on Burgo’s single to left field. Skaff singled, too, and Stephens “fumbled Hall’s grounder, filling the bases.”4 Rullo then drew a walk and forced in a run.

With two outs in the second inning, the Philadelphia rookies rallied for five more runs. Flick singled in his second at-bat, and Kell tripled for his first major-league hit. Burgo, Skaff, Rullo, and Parisse also singled, and Hall doubled, in the onslaught. “Mack’s ambitious freshmen” were “brimming with youthful exuberance,” and Mack was “beaming over his recruits.”5

The Browns scored twice in the top of the third inning, on Milnar’s double, free passes to Ellis Clary and Hal Epps, a sacrifice fly by George McQuinn, and a single by Chet Laabs. Charlie Fuchs, a 29-year-old right-hander, replaced Milnar in the bottom of the third inning and quieted the Philadelphia bats, though Burgo belted his first major-league home run off him in the sixth inning, a solo shot into the lower tier of the left-field stands. The Browns also scored a run in the sixth, on singles by McQuinn, Milt Byrnes, and Mark Christman.

There was no other scoring. The final tally was Athletics 8, Browns 3. Ciola went the distance for the Athletics, earning his first major-league win.6

George Kell, a future Hall of Famer, had one hit in five at-bats. The young third baseman looked good in the field and “gets the ball away fast,” noted Davis J. Walsh of the Wilmington (Delaware) News Journal.7

In his autobiography, Kell recalled his debut:

“I was scared to death. I was more worried about making two or three errors than anything else. I was afraid I might mess up my whole career if I screwed up. … I walked out on that field before the game at Shibe Park and looked all around. I felt just like some kid in toyland. … I remember telling myself that even if I never played another major league game again in my life, at least I was there for one.”8

Regarding that triple he hit in the second inning off Al Milnar, Kell said:

“I sliced a line drive over the first baseman’s head. The ball curled down into the right field corner. By the time the ball got back into the infield, I was standing on third base with a triple. I tried to act very calmly like it was just another time at bat for me. But I was dying to pinch myself to make sure this was all really happening.”9

Game coverage at Baseball-Reference.com and Retrosheet.org and in the following newspaper articles:

6 This was Ciola’s final major-league appearance. He went into the Navy after the season and pitched in the minor leagues after the war.