September 28, 1951: Allie Reynolds throws his second no-hitter of the season

September 28, 1951: Allie Reynolds throws his second no-hitter of the season 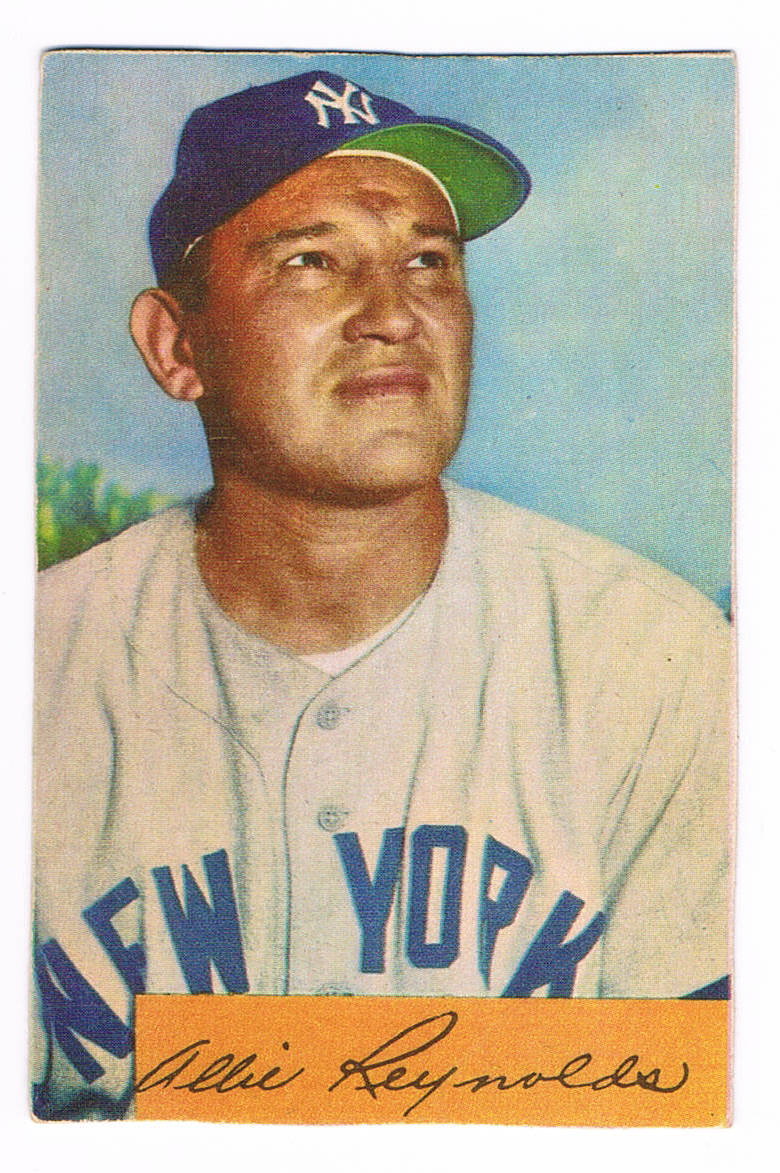 “I knew it all the time,” said Yankees right-hander Allie Reynolds jokingly after holding the Boston Red Sox hitless in the first game of a doubleheader on September 28. “How could I help it? The scoreboard was right there.”1 Described as a “smashing triumph”2 by John Drebinger of the New York Times and a “mound masterpiece”3 by Springfield (Massachusetts) Union correspondent Dutch Robbins, the no-hitter was Reynolds’ second of the season and guaranteed the Yankees at least a tie for the AL pennant. That point was moot when the Bronx Bombers, behind Vic Raschi’s complete game, mauled Boston in the second game,11-3, to capture their third straight pennant and 18th in 31 seasons. “After all these years,” lamented syndicated columnist Red Smith, “the Yankees just had to find a new way to make sure of finishing in first place.”4

An outright pennant was far from guaranteed when the Yankees (93-56) prepared to play five games against their rival Red Sox at Yankee Stadium on the final three days of the regular season. New York owned what appeared to be a comfortable 2½-game lead over the Cleveland Indians; however, skipper Casey Stengel’s squad was playing its worst ball of the season at the most inopportune time. They had split their last 14 games, and were coming off an uninspired 4-1 loss to the second-division Philadelphia Athletics two days earlier. Though New York led the AL in home runs (140) and finished second in runs scored (798) in 1951, the club did not incite the same fear in its opponents that the previous two pennant-winning teams did. Injuries and age seemed to have crept up on them. Joe DiMaggio was having his worst season and Phil Rizzuto’s offensive output had fallen off dramatically from his MVP performance a year earlier, but the team found a way to win behind its “Big Three” pitchers, Eddie Lopat, Raschi, and Reynolds, who combined for 59 victories and just 27 defeats.

Manager Steve O’Neill’s Red Sox (87-62) were in a free-for-all, having lost their last four games and seven of eight. Trailing New York by six games, Boston had no chance for a pennant, but wanted nothing more than to play the role of spoiler, or at least make the Yankees and their fans squirm.

The pitching matchup in the first game featured two two-time All-Star hurlers. Boston’s ace, 29-year-old southpaw Mel Parnell (18-10) relied on a fastball and an assortment of breaking balls (sliders, curves, and sinkers) to fashion a stellar record of 78-38 in parts of five seasons. New York’s Reynolds was a 34-year-old right-hander with a career-record of 135-88 in parts of 10 seasons, including 16-8 thus far in ’51. A member of the Creek nation, the Oklahoma-born Reynolds was known as “Superchief.” Sportswriters regularly made reference to his Native American background, calling him a “noble red-man” and oft times much worse.5 Described by Tommy Holmes of the Brooklyn Eagle as “one of the truly magnificent competitive pitchers in the game,” Reynolds had tossed a no-hitter on July 12, outdueling the Indians’ Bob Feller at Cleveland’s Municipal Stadium, 1-0.6 Reynolds, bothered by chronic elbow pain all season long, hoped to put off impending offseason elbow surgery to remove bone chips as long as possible. If that weren’t enough, Reynolds was suffering from a cold, and was concerned about his wife, who had supposedly fainted a day earlier before leaving their home in Oklahoma to join her husband for the final weekend of the season.7

As the crowd of 39,038 settled into its seats in the “House That Ruth Built” on a Friday afternoon, Reynolds walked the leadoff hitter, Dom DiMaggio. In what was arguably the most important defensive play of the game, Rizzuto fielded Johnny Pesky’s grounder back through the mound, stepped on second, and fired to Joe Collins for an easy twin killing.

The Yankees led off the bottom of the first with consecutive singles by Rizzuto, Jerry Coleman, and Hank Bauer, the latter of which resulted in the first run. After rookie Gil McDougald drew a one-out walk to load the bases, Yogi Berra hit a slow roller between the mound and first base to drive in Coleman, but was easily thrown out at first. With a chance to break the game open, Gene Woodling grounded weakly to Pesky to end the inning.

After Reynolds set down the Red Sox in order in the second and third, the Yankees scored two more in the third to make it 4-0. Coleman led off with a walk, stole second, and scored on McDougald’s two-out single to center field. Berra followed with a single that center fielder DiMaggio booted, allowing McDougald to score and Berra to scamper to second. The Yankees tallied another run in the fourth when Collins led off with a double off reliever Ray Scarborough and subsequently scored on Coleman’s sacrifice fly.

“The crowd became no-hit, no-run conscious in the sixth inning,” wrote Joe Looney of the Boston Herald.8 While many in the stadium held their breath every time a Red Sox batter swung his bat, Reynolds seemed impervious to the mounting tension, and was “breezing along at times,” according to Dutch Robbins.9 Given yet two more runs when Collins belted his ninth home run of the season with Woodling on via a single for a seemingly insurmountable 7-0 lead in the sixth inning, Reynolds appeared to be enjoying every minute of it. He was “laughing on the mound” in the seventh while facing Ted Williams, whom he had struck out in the first and walked in the fourth.10 This time the Splendid Splinter grounded out.

Reynolds’ mood changed in the eighth when Lou Boudreau and Fred Hatfield belted hard-hit balls to deep right field that Hank Bauer caught easily. Bearing down, Reynolds heaved a fastball to Aaron Robinson. From the sound of the ball connecting with the bat, Reynolds was concerned. “I didn’t even look back at it,” said the hurler after the game. “I was sure it was out of the park.”11 Bauer snagged it or the last out of the frame.

The Yankees tacked on another run in the eighth on Woodling’s 15th home run, and Reynolds took the mound for a date with history. He was three outs away from joining Cincinnati’s Johnny Vander Meer as the only pitchers to toss two no-hitters in one season.

Jack Hand of the Associated Press described the ninth as a “fantastic thrill.” Reynolds retired pinch-hitter Charlie Maxwell on a grounder to second.12 After Dom DiMaggio drew a walk, Reynolds’ fourth free pass of the game, the stout, 6-foot hurler caught Pesky looking at a wicked curve for his ninth punchout of the game. Up stepped “Teddy Ballgame,” who had managed only six hits and two RBIs in his previous 30 at-bats. Williams hit a high popup behind the plate for what appeared to be the last out. The normally sure-handed Berra misjudged the ball as it moved in the wind. The ball “squirmed out of his glove,” wrote New York Times sportswriter John Drebinger, and the catcher tumbled, “sprawling on his face.”13 Reynolds, after colliding with Berra and concerned that he might have stepped on his All-Star backstop’s hand, went back to the mound. Armed with what Joe Looney called a “blazing fastball” all afternoon, Reynolds fed Williams another heater which “The Kid” popped up again.14 This time Berra caught it easily to secure Reynolds’ no-hitter, completed in 2 hours and 12 minutes.

Reynolds needed 119 pitches to record the fifth no-hitter in Yankees history and his league-leading seventh shutout.15 Other than Reynolds’ four walks, which pushed his season total to 100 (the seventh consecutive season he broke the 100-barrier), the good-natured hurler tossed a flawless game. According to both the Boston and New York press, the Red Sox did not come close to collecting a hit, and the Yankees’ fielders needed no stellar play to preserve the no-hitter. “I had a good curve out there,” said the proud pitcher, “but didn’t put it where I wanted.”16 It was the major leagues’ fourth no-hitter of the season. (Cleveland’s Bob Feller and Pittsburgh’s Cliff Chambers threw the other two.) Boston had not been held hitless since Bob Burke of the Washington Senators turned the trick on August 8, 1931, at Griffith Stadium.

The Yankees had little time to celebrate Reynolds’ gem. Both teams were soon on the field again to play the second game. Trailing 3-0, New York erupted for seven runs in the second inning and cruised to an 11-3 victory to capture the pennant. It was a “fantastic and dramatic conclusion to the American League pennant race,” opined Bob Holbrook of the Boston Globe.17 The party in the Yankees’ clubhouse was subdued compared with those of seasons past. “It’s still a thrill,” said Joltin’ Joe DiMaggio.18 New York capped off the season by sweeping Boston and then defeated the New York Giants in six games to win their third of five consecutive World Series titles.

15 George Mogridge tossed the first Yankees no-hitter, defeating Boston 2-1 at Fenway Park on April 24, 1917. He was followed by Sad Sam Jones, who no-hit the Philadelphia Athletics, 2-0, at Shibe Park on September 4, 1923. Monte Pearson hurled the first no-hitter in Yankee Stadium when he blanked Cleveland, 13-0, on August 27, 1938. Reynolds tossed the next two.