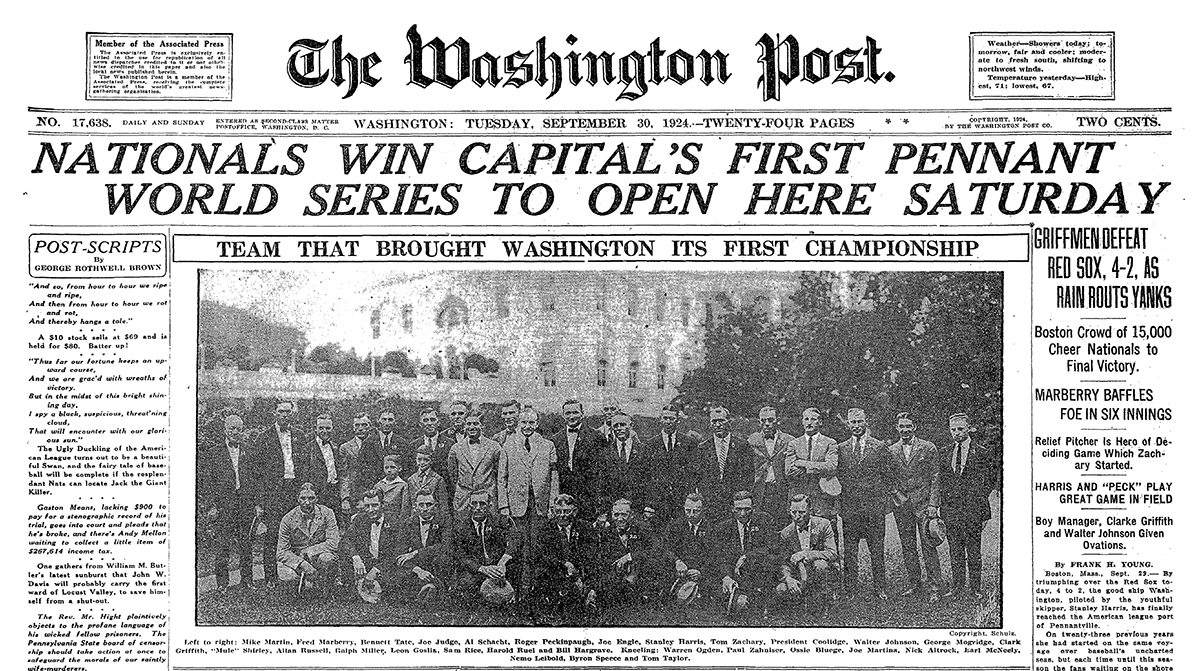 This was it, a day when a dream could come true for three generations of Washington baseball fans. In a year that had produced one of the greatest pennant chases in American League history, involving a summer-long battle between the Senators, New York Yankees, and Detroit Tigers, the Washington Senators moved into first place entering the season’s final month. On September 29, 1924, with two games remaining in the season, Washington needed only one win or a Yankees loss to clinch the first major-league pennant in the city’s history.

Talking to sportswriters that morning at Boston’s Brunswick Hotel, Bucky Harris, the Senators’ 27-year-old rookie manager and starting second baseman, expressed how his entire team felt. “We’re going out today to clinch this thing,” he said with confidence. “Never mind these Yankees. I don’t care what happens in Philadelphia. We’ve got to win our own pennant, not have Philadelphia win it for us (by beating the Yankees).”1

Before a Monday afternoon crowd of 15,000 at Boston’s Fenway Park, the Senators scored in the top of the first. Sam Rice, who contributed to Washington’s late-season charge by hitting safely in 31 consecutive games before his hitting streak ended three days ago, singled with two outs. Then on the first pitch to Goose Goslin, Rice broke for second. Knowing there would be a play, he hit the dirt, and as he aimed his left foot at the base, the catcher’s throw skipped off his left knee and bounced into left field. Rice got up and took off for third as the ball rolled through left field, across the foul line and into foul territory. He then rounded third and crossed the plate for a 1-0 Washington lead.

Scoring one in the top of the first fired up the visiting team. In the bottom of the inning the Senators “took the field with blood in their eyes,” according to Frank H. Young of the Washington Post.2 On the mound for the Senators was left-hander Tom Zachary, who was honored for the opportunity to pitch the potential pennant-clinching game. “I will beat them,” he said the day before. “Tell the folks back home I can beat them and I will. It will all be over tomorrow night.”3 And when he took the mound, he had the luxury of having a 1-0 lead. That quickly vanished, however, when the first four Boston batters reached base to produce a run. With the score now tied, 1-1, and the bases loaded with nobody out, Zachary buckled down by whiffing slugging Red Sox first baseman Joe Harris and inducing the next batter, Homer Ezzell, to hit one on the ground, resulting in an inning ending 6-4-3 double play: Peckinpaugh-to- Harris-to-Judge.

In the top of the second the Senators untied the score on four successive singles, once again waiting until after two were out before going to work. Shortstop Roger Peckinpaugh, catcher Muddy Ruel, Zachary, and center fielder Nemo Leibold all singled for two tallies and a 3-1 lead, which seemed safe with Zachary on the mound. But once again, the usually reliable crafty southpaw got into trouble.

A hit, walk, and an error once again loaded the bases for Boston with nobody out. Red Sox center fielder Denny Williams then lined one up the middle that appeared to be earmarked for a hit. But Zachary raised his mitt in time to snare the ball, then threw to third baseman Ossie Bluege to double up the Boston runner on third. And when the next batter grounded out to Peckinpaugh, the Senators once again had averted disaster.

After the Senators failed to score in their half of the third, they took the field for the last half of the inning, and, “Much to everyone’s surprise, Zachary again took the hill.”4 It was clearly not his day, but Harris opted to stick with Zachary, perhaps believing he would settle down or feeling he owed him a chance to pitch in the pennant clincher.

The first two Red Sox batters reached base and moved into scoring position on a sacrifice. With runners now on second and third and only one out, Red Sox batter Homer Ezzell drilled one back at Zachary, who knocked the liner to the ground, recovered, and threw to first in time, with the runner on third scoring on the play. Zachary then got the last out to end the inning and preserve Washington’s 3-2 lead. When Harris stepped into the dugout after the inning, now convinced that a pitching change was in order, he told Firpo Marberry, the Senators’ relief specialist, “Get ready to relieve Zachary,” which was music to the rookie pitcher’s ears.5

In St. Louis nine days before, Marberry was the loneliest man in the world when his throwing error allowed the Browns’ winning run to score in the bottom of the 10th. Having visions that this loss would result in the Senators losing the pennant by one game, the sensitive hurler isolated himself from his teammates, even going as far as to take a solo taxi ride back to the team’s hotel. But today was another day, and one that offered Marberry a chance for redemption by pitching in the game that could clinch the pennant. “I felt it in me to go out there and stop those Red Sox,” Marberry said after the game. “I was determined to stop them. I warmed up and felt strong enough to beat any team in the world.”6

Marberry blanked the Red Sox in the fourth, fifth, and sixth innings. As the game now headed into the top of the seventh, the Fenway diehards elected to put their put their loyalty aside by standing and cheering, a kind gesture from the home crowd that was unsurprising to the sportswriters or Senators, for on this entire road trip the Senators found themselves favored by the opponents’ hometown fans who poured out their love and support for an underdog. “I never saw anything like that before,” Washington’s legendary pitcher Walter Johnson said before this series. “Even in Detroit and St. Louis the crowd pulled hard for Washington, and in Chicago and in Cleveland, a stranger would have thought that we were the home team.”7

Washington did not score in the seventh, but managed to put another run on the board in the eighth inning when Bucky Harris doubled off the left-field scoreboard and tallied when Sam Rice, Washington’s leading hitter with a .344 batting average, singled to increase the lead to 4-2.

In the bottom of the eighth, Marberry blanked the Red Sox for the fifth straight inning. After the Senators quickly went down in order in the top of the ninth, Washington was just three outs away from victory.

The first batter in the Red Sox ninth, Steve O’Neill, grounded to Harris, who threw to first for the first out of the inning. “Two more to go, Bucky,” the crowd yelled.8 The next batter, pinch-hitter Danny Clark, delivered a single for the fourth Boston hit off Marberry. Now with a runner on first and one out, Denny Williams, 2-for-4 today, stepped in. He hit a roller toward Harris. “Bucky was on it like a terrier on a released rat,” was how a writer described the action.9 The Washington manager fielded the ball cleanly, hopped three or four yards to the second-base bag, touched the base for the inning’s second out, and then made a pivot in mid-air, “a rare gem on acrobatic art, and streamed the ball to (Senators first baseman Joe) Judge.”10 His throw plunged into the webbing of Judge’s mitt with a loud pop that was audible in the stands along the first-base side for the inning’s third out and the end of the game. The Washington Senators were American League champions!

The Washington players in the dugout celebrated by throwing all the bats and mitts onto the field and smashing the water buckets to pieces. The victorious team on the field expressed their joy by enthusiastically shaking hands and pounding one another on the back. A few hundred fans spilled onto the field to join the Washington celebration. After their jubilee, the Senators sprinted for the clubhouse. Several young fans ran for Judge, hoping that maybe the Washington first baseman would hand over that baseball that ended the game. Joe Judge responded by joyfully motioning to the kids to step aside.

Back in Washington, thousands of fans endured the pouring rain and high winds while watching the game’s results posted on six electric scoreboards outside the city’s newspaper buildings and on street corners. When the flash was received, notifying the fans that it was all over, there was “a wild outburst of cheering and shouting that told of Washington’s victory at Boston.”11 Several delirious fans rejoiced by tossing their umbrellas, hats, and canes into the air. “Well, George,” a grizzled old man said to his elderly friend, “we lived to see the day.”12 After five decades of frustration and losing baseball, Washington, D.C., finally had a winner.