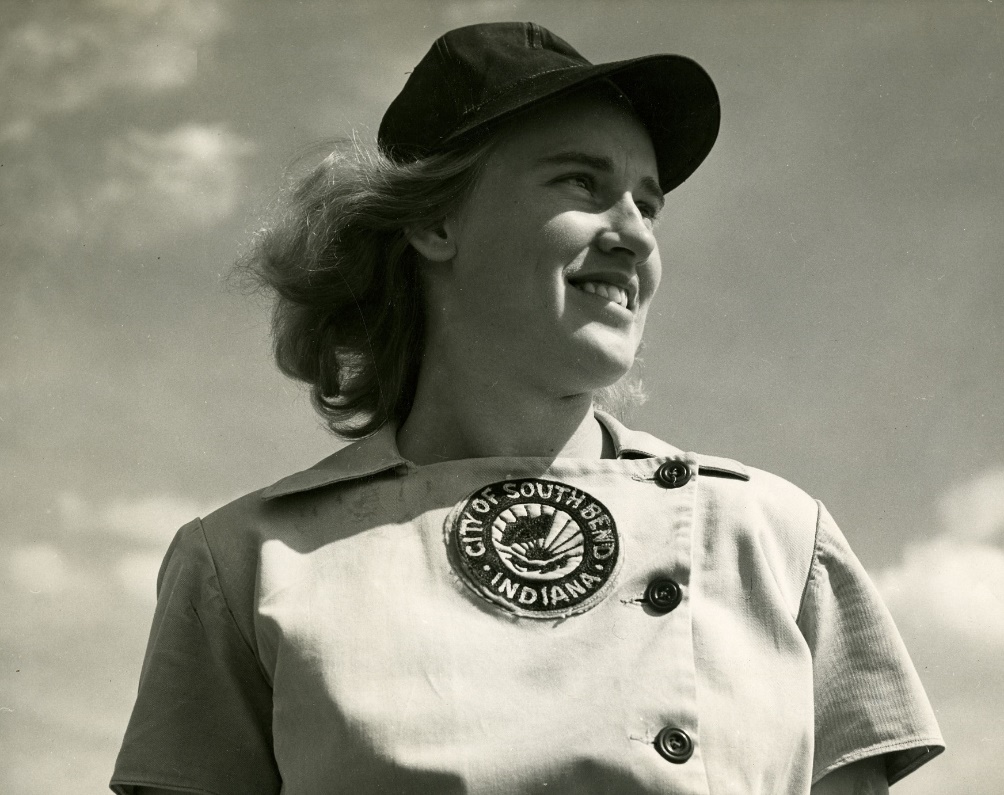 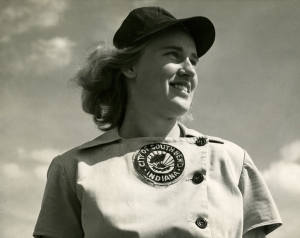 Jean Faut was having another outstanding season for the South Bend Blue Sox. Not only was she the best pitcher in the All-American Girls Professional Baseball League (AAGPBL) in 1953, but her contributions as a two-way player were invaluable. When she wasn’t on the mound, Faut was South Bend’s regular third sacker, leading the team in batting average, home runs, and RBIs.1

Her performance still wasn’t enough to prevent a dramatic fall from grace for the two-time defending champions. A September 2 loss to the Rockford Peaches dropped the Blue Sox’ record to 42-62 and eliminated them from postseason contention.2 Faut, however, continued to battle until the bitter end.

The Blue Sox had defied the odds in 1952 by becoming playoff champions after a six-player walkout near the end of the regular season had reduced the team’s roster to only 12 players.3 Manager Karl Winsch – Faut’s husband – had triggered the player revolt by feuding with star second baseman Charlene “Shorty” Pryer (later Mayer). To plug the sudden holes in the lineup, Winsch relied heavily on a trio of two-way players in the postseason.4 The ploy worked well in two short playoff series. But the Blue Sox were severely hobbled when the six players didn’t return in 1953 and capable replacements could not be found.

The fifth-place Blue Sox opened a three-game series against the Kalamazoo Lassies the day after their elimination. The third-place Lassies, with a record of 56-48, were headed to the playoffs for the first time since the franchise relocated from Muskegon during the 1950 season. The much-improved Kalamazoo offense was led by former Blue Sox outfielder Jane “Jeep” Stoll, one of the players who had walked out in support of Pryer.5

Ruth Williams (later Heverly) got the start for Kalamazoo. During the previous three years, the hard-luck pitcher had become all too familiar with getting poor run support from the Lassies. This start would be no different for the 27-year-old right-hander. Williams finished the 1953 season with an 8-12 record despite posting a 2.12 ERA, sixth best in the league.

Faut took to the mound for what would be the next to last start of her stellar career. The 28-year-old hurler came into the game with a 16-10 record and a 1.51 ERA.6

Faut had been a star pitcher since joining the league in 1946. While flamethrowers like Lois “Flash” Florreich overpowered hitters, Faut used a more cerebral approach. She kept batters off balance by using different arm angles and a diverse repertoire of pitches that included a fastball, curve, screwball, sinker, and changeup.7 She also had an uncanny ability to remember the sequence of pitches she had previously thrown to hitters, which made it more difficult for them to anticipate what was coming next.8

Faut and Williams were locked in a scoreless duel for the first four innings, with Faut easily retiring the first 12 Kalamazoo hitters in order.

South Bend broke the game wide open in the top of the fifth inning by scoring four runs on a double, two infield singles, two walks, and two errors.

With one out, Irene Applegren got things started by beating out a bunt for a hit. She advanced to third on a double pulled down the left-field line by Mary Froning (later O’Meara). After Marguerite “Dolly” Pearson (later Tesseine) walked to load the bases, Lois Youngen hit a grounder to Terry Rukavina. The Kalamazoo second baseman was slow to decide where to throw the ball and all runners advanced safely; Applegren scored the game’s first run and Youngen was credited with an RBI single.

The inning continued to unravel when errors by Jean Lovell and June “Lefty” Peppas each allowed another run to score. The fourth run of the inning crossed the plate when Williams issued a bases-loaded walk to Faut.

The South Bend hurler recorded another one-two-three inning in the bottom of the fifth, with the third out coming on a fly ball to center field off the bat of Joan “Jo Jo” Sindelar.9 It was the third − and final − ball Kalamazoo hit out of the infield in the game.

Faut continued to mow down the Lassies hitters. The East Greenville, Pennsylvania, native took her perfect game into the bottom of the ninth with the score still 4-0 in favor of South Bend. After Fern “Shelly” Shollenberger made the first out of the inning, Kalamazoo manager Mitch Skupien did everything he could to break up the perfect game. Pinch-hitter Betty Francis grounded out for the second out of the inning, leaving another pinch-hitter, Jenny Romatowski, as the final obstacle to a perfect game. Faut sealed the deal by retiring Romatowski on a popup for the game’s final out.

Faut’s outing was so dominant that not a single outstanding defensive play was necessary to preserve the perfect game. She struck out eight Lassies.

It was the second perfect game of Faut’s career − the first was on July 21, 1951,10 against the Rockford Peaches – making her the only AAGPBL hurler to accomplish the feat more than once. Annabelle “Lefty” Lee (later Harmon) of the Minneapolis Millerettes, who threw the league’s first perfect game in 1944, would have tossed a second perfect game were it not for a second-inning error in a July 8, 1945, game.11

Faut’s latest gem was the fourth no-hitter of her career and all four were thrown overhand.12 In addition to her two perfect games, she also tossed no-hitters against the Racine Belles on September 4, 1948, and the Fort Wayne Daisies on September 3, 1949, four years to the day before her gem against Kalamazoo.13

She hurled her 1948 no-hitter from a mound that was 50 feet from home plate using a ball that had a circumference of 10⅜ inches, while her 1949 no-no and 1951 perfect game were accomplished using a 10-inch ball thrown from a distance of 55 feet. The mound was one foot farther away for her second perfect game.14

In its recap of Faut’s most recent perfect game, the South Bend Tribune mentioned that she “may retire when the season ends on Labor Day,” even though she was still in the prime of her career.15 Three days later, the team honored her by hosting a Jean Faut Night in a game against the Grand Rapids Chicks at Playland Park. She was presented with $400 in gifts prior to the contest and the grateful hurler took to the mound on two days’ rest.16 She tossed two more one-two-three innings before Renae “Ray” Youngberg opened the top of the third with a double, snapping Faut’s streak of 34 consecutive outs.17 Grand Rapids, that season’s playoff champions, spoiled Jean Faut Night, as Earlene “Beans” Risinger outpitched Faut in a 3-0 Chicks victory.

Faut finished the season with a 17-11 record and a 1.51 ERA, giving her the league’s best ERA for the third time in four seasons and earning her the Player of the Year Award. She also tied for the league lead in wins and strikeouts (143).

The celebrated hurler announced her retirement at the end of the 1953 season,18 making Jean Faut Night the final appearance of her career. There were several reasons for the premature end to her career, including her tempestuous marriage to Winsch.19 At spring training in 1951, Winsch had shocked Faut by showing up unannounced as the team’s new manager.20 After a relatively tranquil initial season at the helm,21 the hard-nosed skipper became deeply unpopular with the Blue Sox players, leaving Faut isolated from her teammates, who were hesitant to socialize with the manager’s wife.22 “It was a very uncomfortable situation for me and I decided to retire from baseball to get away from it,” Faut recalled. “I was stuck in the middle, so I just bowed out.”23 While Faut stayed home and cared for their young son, Winsch continued as Blue Sox manager in 1954.24 The couple divorced in 1968.25

Faut spent her entire eight-year career with the Blue Sox. The four-time All-Star (1949-51, 1953) compiled a 140-64 career record and stingy 1.23 ERA, the lowest such mark for any AAGPBL pitcher to fling at least 500 innings. She is second on the career wins list, trailing only Helen Nicol Fox (163 wins), and third on the career strikeouts list with 913. She is one of only two players to win the Player of the Year Award twice, and narrowly missed winning another when she fell one vote short in 1952.26 Faut also has the distinction of being the only hurler to toss a perfect game during the league’s overhand pitching era (1948-54).

“Jean was an awesome pitcher and a really complete ballplayer,” remembered Dorothy “Dottie” Schroeder, one of the AAGPBL’s all-time greats and the only woman to play all 12 seasons of the league’s existence. “[Faut was] a top pitcher with few equals: [A] great hitter who was so good with the bat, she played infield or outfield when not pitching. … [I] always admired her greatly, even more so for her competitive nature on the field.”27

In addition to the sources cited in the Notes, the author consulted AAGPBL.org and The All-American Girls Professional Baseball League Record Book. Standings were referenced in the South Bend Tribune. Unless otherwise noted, all play-by-play information for this game was taken from the article “Faut Hurls Perfect Game Against Lassies; Ace Pitcher Caps Season for Blue Sox” on page 33 of the September 4, 1953, edition of the South Bend Tribune.

3 The six Blue Sox players who walked out were Charlene “Shorty” Pryer, outfielder Jane “Jeep” Stoll, catcher Shirley Stovroff, first baseman and pitcher Dottie “Sporty” Mueller, third baseman Barbara Hoffman, and outfielder Elizabeth “Lib” Mahon. Stoll was the Blue Sox’s top offensive player. Pryer was the team’s regular second baseman, leading the league with 59 steals. Stovroff was South Bend’s regular catcher and a proven run producer. The walkout was costly for the players. Of the six who walked out, only Stoll and Mueller ever played another game in the AAGPBL. “Faut to Hurl Opener; Two Join Walkout,” South Bend Tribune, September 2, 1952: 16; Jim Sargent, We Were the All-American Girls: Interviews with Players of the AAGPBL, 1943-1954 (Jefferson, North Carolina: McFarland & Company, 2013), 191, 196.

6 Faut’s record coming into this game was calculated by subtracting her last two starts (1-1 record and 3 earned runs in 18 innings) from her end-of-season statistics.

14 The AAGPBL used a 9-inch ball and a pitching distance of 60 feet in 1954. As of 2022, a regulation baseball was between 9 and 9¼ inches in circumference. “Rules of Play,” All-American Girls Professional Baseball League, https://www.aagpbl.org/history/rules-of-play, accessed March 1, 2022.

24 The AAGPBL ceased operations after the 1954 season.

25 The couple’s first son, Larry, was born in March 1948. He was five years old when Faut retired from the AAGPBL. Lombardo.