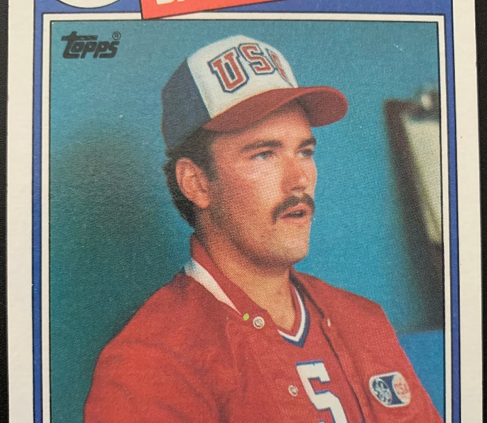 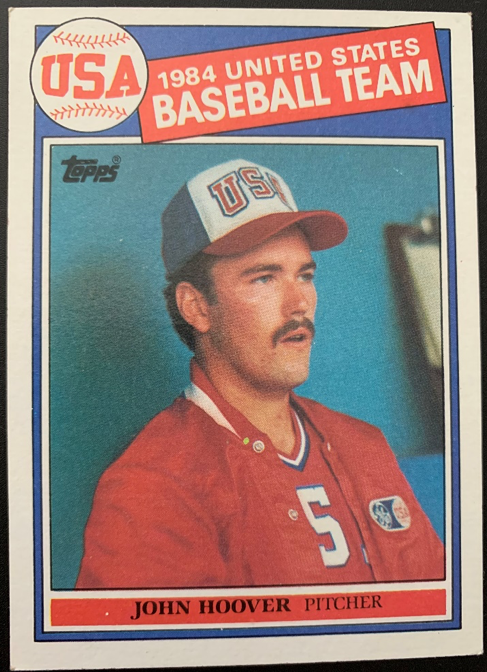 Baseball card collectors were treated to a unique surprise in 1985, as Topps’ flagship card set included a special subset devoted to the members of the 1984 US Olympic baseball team. This subset gave card buyers their first look at some names that would become familiar in years to come, like Mark McGwire, Bill Swift, Cory Snyder, Oddibe McDowell, and Shane Mack.1

Other members of the team — like pitchers John Hoover and Sid Akins, catcher Bob Caffrey, and infielder Flavio Alfaro — never made a name for themselves in the big leagues, or never made the majors at all. Over the years, their 1985 Topps cards became “commons,” with no special value beyond their Olympic novelty.

Hoover, the team’s top starter and a first-round draft pick of the Baltimore Orioles, struggled in the pros. He posted an 11.57 ERA in two major-league appearances with the 1990 Texas Rangers, and in seven minor-league seasons his record was 48-55 with a 4.61 ERA. Still, there were days in the professional ranks when he pitched well and lived up to his potential. Possibly the best of those days came in his fifth pro game, as a 21-year-old member of the Triple-A Rochester Red Wings, when he took the mound for the first game of a season-ending Labor Day doubleheader in Syracuse, New York.

The setting hardly seemed ripe for heroics, with a scant crowd of 1,277 on hand to watch the two worst teams in the International League do battle in a pair of seven-inning games. Manager Jim Beauchamp’s Syracuse Chiefs, affiliated with the Toronto Blue Jays, sat in seventh place with a 57-80 record. The Baltimore-affiliated Red Wings, led by itinerant minor-league skipper Frank Verdi, were even worse at 51-87. In fact, the Red Wings came into the doubleheader having already clinched their worst winning percentage since the modern Rochester franchise began in 1928.2

That said, neither team slacked off on the last day. Toronto held off on recalling players until after the Triple-A season ended, and several players who received call-ups were still in the Syracuse lineup. They included third baseman Kelly Gruber (21 home runs), center fielder Mitch Webster (.300 with 16 stolen bases), second baseman Fred Manrique (.282, 14 SBs) and catcher Toby Hernandez. The Syracuse lineup faced by Hoover also included big-league vet Al Woods in left field; 20-year-old first baseman Fred McGriff, still two years away from the majors; and minor-league veteran DH Jerry Keller, who hit 28 homers for the Chiefs. The Chiefs’ starting pitcher was righty Matt Williams (9-12, 3.34 for the year), who had cups of coffee with Toronto and Texas.

For Hoover, the game offered a chance to end a roller-coaster season on a high note. He posted an 18-2 record in his last season at Fresno State, setting NCAA records for complete games in a season (19) and career (42) and being named NCAA Pitcher of the Year.3 He pitched well during a pre-Olympic barnstorming tour4 and in early rounds of the Olympics, but fared poorly in the final game, a 6-3 loss to Japan.5 Signing with Baltimore in early August, he won his first relief appearance as a pro. But in his first pro start, he lasted just 1⅓ innings, uncharacteristically walking as many Maine Guides (four) as he retired.6 He brought a 1-3 record and an ERA above 8 into the Labor Day start.

The Red Wings got on the scoreboard early. In the top of the second, designated hitter Mike Calise singled up the middle and scored on a double to right-center by Dallas Williams, making it 1-0, Rochester.7

After that, third baseman Ashford carried the rest of the offensive load. In the fifth inning, first baseman Dave Falcone reached on a throwing error by Manrique, Bonner singled him to second, and Ashford drove in both with another double to right-center to make it 3-0. In the seventh, with future big-league mainstay Mark Eichhorn pitching for Syracuse, Bonner reached on an infield single and Ashford again doubled him home to bring the final score to 4-0. (Bonner, a Rochester fan favorite, had previously announced his intent to retire; September 3, 1984, was the final day of his seven-season pro career.)

The inning-by-inning details of Hoover’s complete game are harder to come by. Disappointingly, neither the Rochester nor Syracuse newspaper game stories comment on his pitching performance, focusing instead on other aspects of the doubleheader. (In the second game, the Wings fell into an early hole, rallied almost all the way back, then lost 6-5.) A dominant appearance by a first-round draft pick, and one of the Red Wings’ best-pitched games of the year,8 was apparently not considered worth describing in detail.

But the box score and other sources cast some light on the game. There wasn’t much to say about the Chiefs’ offense because Hoover allowed only three singles — by Hernandez, Keller, and right fielder Dale Holman. He walked none and struck out five, and the Red Wings made no errors behind him. (The Chiefs made four.) The seven-inning game wrapped up in just 75 minutes.9

Hoover was known as a control pitcher who kept the ball low, relying on a 12-to-6 curve, breaking stuff, and smarts rather than an overpowering fastball. When he signed, Orioles farm director Tom Giordano compared him to the crafty Mike Boddicker.10 It seems likely, then, that Hoover’s mix of pitches was working well against Syracuse — that “the fastball was down and the curve was snapping,” to quote a reporter’s description of an effective outing by Hoover the following year.11

Hoover never threw another shutout at the Triple-A level.12 Indeed, his career bogged down at lower levels, and he didn’t even make it back to Triple A until 1990. Hoover’s professional struggles were never definitively diagnosed, although some suggested that he had been overused in college,13 that Orioles coaches had tampered with his pitching mechanics,14 or that his glittering college numbers had simply oversold his talent.15 After baseball, Hoover worked in law enforcement. He died in July 2014 in his hometown of Fresno, California.16 While Hoover’s post-Olympic career was ultimately frustrating, its high points should not be forgotten — including the September day in Syracuse when the future looked golden.

1 The Olympic subset, as well as the rest of the ’85 Topps set, can be seen online at the Trading Card Database: https://tcdb.com/Checklist.cfm/sid/103/1985-Topps?PageIndex=4. John Hoover is card 397.

3 John Kolomic, “Talent of Olympian Proportions Stops at Silver; There Is No Gold,” Rochester Democrat and Chronicle, June 21, 1984: 1D.

8 The 1984 Red Wings pitching staff posted a league-fewest six shutouts and a league-worst 4.72 ERA. They also tied with the Richmond Braves with a league-low 20 complete games, according to Baseball-Reference.

11 Kevin Quirk, “Pitching Is Betraying Hoover,” Charlotte (North Carolina) News, May 25, 1985: B1. In this story, Hoover said of himself: “I’ve always been a low-ball pitcher, throwing groundballs and getting strikeouts.”

12 Hoover threw six additional shutouts at the Single-A and Double-A levels between 1985 and 1989.

13 John Kolomic, “Wings to Test Hoover’s AAA Rating,” Rochester Democrat and Chronicle, August 15, 1984: 1D. In this article, Hoover estimated he had thrown 400 innings over the previous 15 months. In later years, Hoover was quoted as defending his Fresno State coach, Bob Bennett, a member of the College Baseball Hall of Fame.