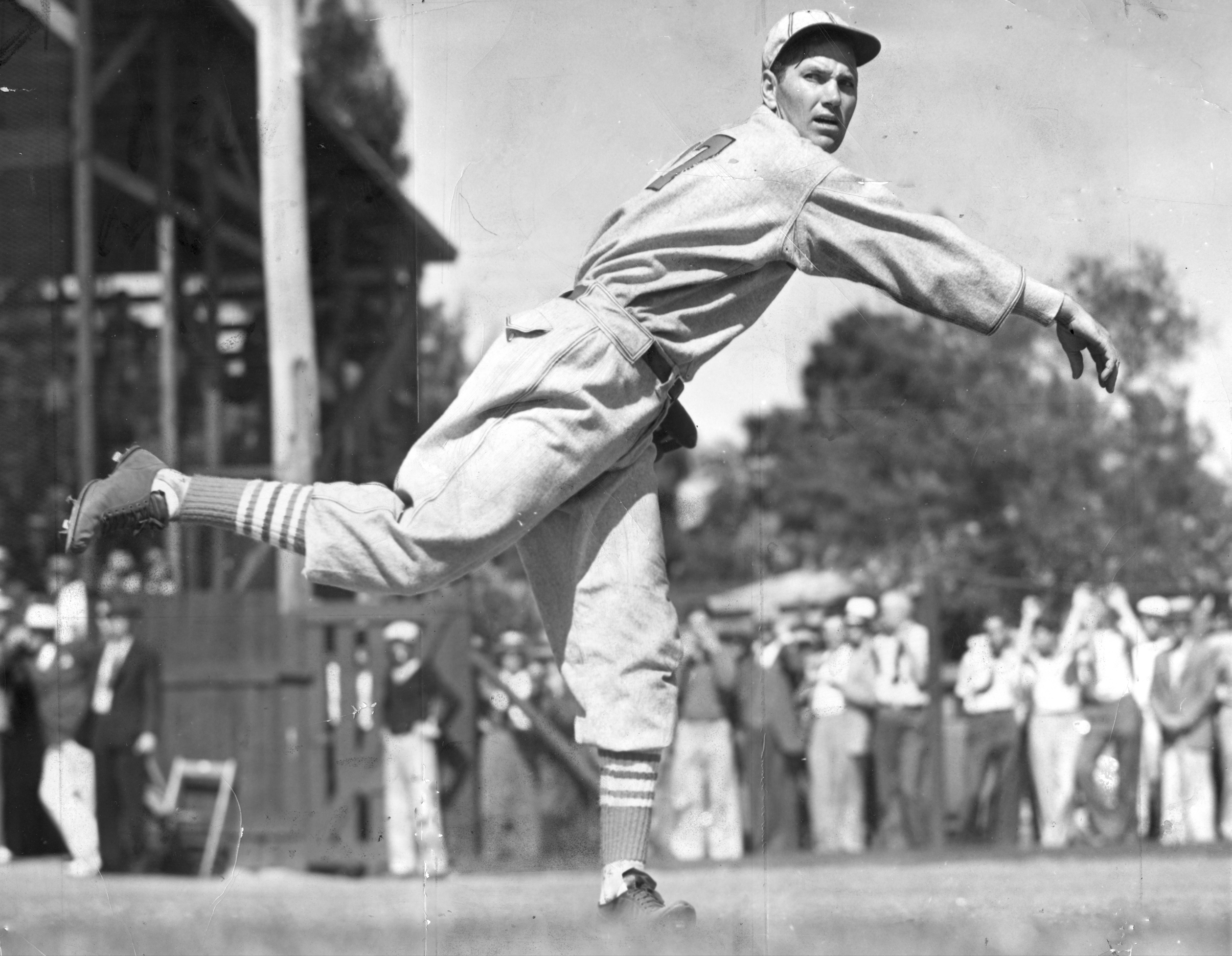 “If a showman had arranged it,” opined the AP’s Paul Mickelson, “he couldn’t have staged a more dramatic finish than that of today.”1 The pennant hopes of the St. Louis Cardinals hinged on the last day of the season. A victory over the lowly Cincinnati Reds guaranteed the Redbirds the pennant; their loss and a victory by the New York Giants against Brooklyn would result in a tie and force an unprecedented playoff. Cardinals player-manager Frankie Frisch called on the hurler who had led his team to an unlikely September surge and to the cusp of its fifth pennant in nine years, Dizzy Dean, whom sportswriter Hugh Fuller hailed as “greatest single figure of the 1934 major league season.”2

After consecutive second-division finishes, the Cardinals were not among the pennant favorites as the 1934 season began. However, they surprisingly battled the Giants and Chicago Cubs for first place for much of the summer, led by a strong mound corps that included the Dean brothers, 24-year-old Dizzy and 21-year-old rookie Paul, often called Daffy, and a high-scoring, rollicking offense. Trailing the Giants by seven games on September 6, the Cardinals got hot and commenced what St. Louis sportswriter J. Roy Stockton described as “the most spectacular story-book stretch drive in the history of the major leagues.”3 The “Gas House Gang,” so known for its rough-and-tumble personalities and style of play, won 18 of 23 games to take a one-game lead over skipper Bill Terry’s Giants on the eve of the last day of the regular season.

“There is no question in my mind,” said Frisch when asked who the 1934 National League MVP should be. “Dizzy Dean.”4 The eccentric right-hander from Arkansas might have been the game’s biggest attraction after Babe Ruth. He had led the NL in innings pitched and strikeouts as a rookie in 1932 and won 20 games in 1933, but his 1934 campaign was one for the ages. He won 14 games by the All-Star break, including a career-best 17-inning outing against Cincinnati on July 1. He was at his best when the Cardinals needed him most. He entered the season finale with victories in his last six starts of the month (and also relieved four times). With the Cardinals trailing the Giants by a half-game with three games left in the season, Dean tossed a seven-hit shutout against the Reds for his 29th victory in the first game of the three-game series to pull the Redbirds into a tie. “I never saw [a ballclub] with more courage or more confidence” said Frisch, who called on his Dizzy to perform his magic again on two days’ rest.5

Sportsman’s Park, the 25-year-old stadium that the Cardinals had called home since 1920, was jam-packed with 37,402 fans.6 It was the biggest crowd since a doubleheader against the Cubs drew in excess of 45,000 on July 12, 1931. “The aisles were crowded and it was tough for spectators to move around,” wrote the Post-Dispatch.7 Just as the game began, the Cardinals faithful let out a collective groan as the scoreboard posted four runs for the Giants in the first inning against Brooklyn in the Polo Grounds.

The score of the Giants-Dodgers game put additional pressure on Dean facing the last-place Reds (52-98), a whopping 41 games behind the Cardinals, and the lowest-scoring team in the big leagues. Dean retired the side in order, the final out coming on the first of several exceptional defensive plays by the Cardinals when left fielder Ernie Orsatti made a “spectacular diving catch” of Mark Koenig’s low fly, somersaulting afterward.8 Cincinnati skipper Chuck Dressen protested the ruling, to no avail. “The gods of opportunities were with the Cardinals,” mused Paul Mickelson, noting the Reds’ “lost opportunities” and “freakish bounces” throughout the game.9

The Redbirds wasted no time taking their hacks at 27-year-old right-hander Si Johnson, who entered the game with seven wins and a league-high 21 losses. Jack Rothrock hit a “vicious” one-out single over second base, and moved to second on Frisch’s single.10 After Ripper Collins drew a two-out walk to load the bases, rookie Bill DeLancey belted a single against the right-field pavilion screen to drive in Rothrock and Frisch for the game’s first runs. Left fielder Harlin Pool made a nifty running catch on Orsatti’s hard fly to end the frame.

Staked to an early two-run lead, Dean blew through the next three innings, yielding two hits. While he subdued the Reds on what the Post-Dispatch lauded as “brilliant pitching,” Lady Luck continued to smile on the Cardinals fielders.11 With two outs in the third, Sparky Adams lined a bullet off Dean’s leg but the ball caromed into Ripper Collins’s glove. The 5-foot-9 first baseman from Altoona, Pennsylvania, sauntered to the bag for an inning-ending out. In an even more peculiar play, Gordon Slade led off the fourth by ducking from Dean’s wild pitch, but in doing so he inadvertently hit the ball back to the mound where Dean stabbed it and tossed to Collins for another easy out.12 The fourth inning ended when shortstop Frisch fielded Pool’s liner and slid into second to force Koenig, who had singled.

Johnson “lost control” in the fourth, wrote the Post-Dispatch, loading the bases by hitting Collins and walking DeLancey and Orsatti with no outs.13 Leo Durocher greeted right-handed reliever Benny Frey with a single to drive in Collins. The Cardinals tacked on two more when the “Wild Horse of the Osage,” Pepper Martin, lined a one-out single to left to give the Cardinals a 5-0 lead.

After Dean worked around a one-out double down the right-field line by Adam Comorosky in the fifth, the Cardinals added another run on DeLancey’s 13th home run, a towering shot over the right field pavilion.

Despite the Cardinals’ commanding six-run lead to start the seventh inning, Frisch was not taking any chances with the pennant on the line and the outcome of the Giants-Dodgers game still up in the air. After Pool led off with a infield single, Frisch motioned for starters Wild Bill Hallahan and Tex Carleton to start warming up in the bullpen. Moments after Dean retired Wes Schulmerich on a pop foul to DeLancey, Sportsman’s Park erupted in collective cheer when the scoreboard announced that the Dodgers had tied the Giants, 5-5 in the eighth. Dean issued a walk to Comorosky then retired Clyde Manion and pinch-hitter Frank McCormick to escape a jam and keep his shutout intact.

Buoyed by a vivacious crowd, Joe “Ducky” Medwick, who had been named earlier to his first of seven consecutive NL All-Star teams, walked to lead off the seventh against reliever Allyn Stout. Collins followed with his 200th hit and 35th home run of the season, a shot over the right-field pavilion to give him 128 RBIs. After Durocher’s two-out single, Dean got into the hit parade with a single. (Adept with the bludgeon, Dean batted .246 [29-for-118] in ’34). Martin fouled out to end the frame. The Redbirds tallied their ninth and final run in the eighth on DeLancey’s third hit of the game, a two-out single driving in Frisch, to tie his career high with four RBIs.

While the Giants-Dodgers game moved into extra innings, Dean took the mound in the ninth, and in the words of the Post-Dispatch, “closed the game with a grand flourish of power,” but not without a few minutes of tension.14 Pool led off with a single and moved to third on Schulmerich’s double. It was the first time Dean had yielded more than one hit in any inning, and the first time a runner had advanced to third. Comorosky drew Dean’s third walk of the game to load the bases. With the bullpen quiet, Dean fanned Manion and pinch-hitter Ted Petoskey for his sixth and seventh punchouts of the game. Around this time, the ballpark burst into its third collective cheer. The scoreboard had just announced that Brooklyn had defeated New York in 10 innings. The Cardinals had won the pennant. The Post-Dispatch reported that the crowd went wild and confetti fell from the upper deck of the stadium.15 Keeping his composure in the mounting melee, Dean retired Adams on a popup to DeLancey to end the game in 2 hours and 1 minute.

There was a “mad rush” of fans onto the field,” reported the Post-Dispatch, as soon as DeLancey corralled the ball.16 Dean was led by a “flying squadron of coppers” to the clubhouse, where the Redbirds celebrated the pennant.17 “[It was a] triumph of a ball club with every man on the squad doing his share,” exclaimed Frisch ecstatically.18

In fashioning his second shutout in three days and his league-high seventh of the season, the hurler, whose given name was Jay Hanna, picked up his 30th victory of the season, the first to reach that mark since Pete Alexander in 1917. Dean finished one of the most memorable campaigns in big-league history with a 30-7 record and 2.66 ERA in 311⅔ innings and led the league in strikeouts (195) for the third straight season.

6 The St. Louis Post-Dispatch gave the attendance as 37,402; the Associated Press gave the figure 35,274. BaseballReference.com uses the AP figure.