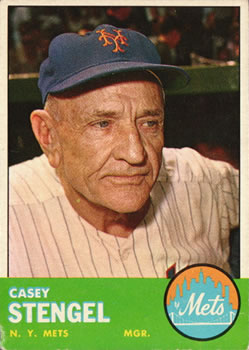 September 30, 1962, was a warm, sunny day in Chicago as the New York Mets and Chicago Cubs took the field for the last game of the season. Both teams resided in the National League basement. The Cubs would finish with a record of 59-103. The Mets would end up even worse, 40-120.

The Mets’ record might have been more woeful had their game on September 9 against the Houston Colt 45’s not been canceled by a curfew in Houston barring the start of any inning after 7 o’clock on Sunday night.1 On September 26, the Mets had lost their 118th game to the Milwaukee Braves, breaking the 1916 Philadelphia Athletics’ twentieth-century record of 117 losses in a season. New York lost its 119th game on September 28 against the Cubs, 3-2.

A meager turnout of 3,960 showed up at Wrigley Field on the 30th. The Mets sent rookie Willard Hunter to the mound. Hunter had won one game since being called up from the minors late in the season. The Cubs’ Bob Buhl, with a record of 11-14, opposed Hunter.

Buhl pitched solid ball for the first three innings, allowing just one Mets hit, a double by Felix Mantilla in the second inning. The Cubs scored a run in the second when Hunter gave up a single to leadoff batter George Altman and walked the next three hitters. After the third walk, Mets manager Casey Stengel replaced Hunter with Ray Daviault, who retired the Cubs without allowing any more runs.

The Cubs made the score 2-0 in the bottom of the third. Daviault gave up a single to Ron Santo to start the inning. Billy Williams flew out to center field, and Ernie Banks hit a ground ball to force out Santo at second. Altman walked, and Nelson Mathews doubled to score Banks. In the top of the fourth inning, Frank Thomas knocked his 34th and final home run of the season to make the score 2-1.

The Cubs kept putting runs on the board. They tagged Craig Anderson, who took the mound in the fifth inning, for three runs. It just another long day for Anderson. After getting his third win in May, he had endured 19 consecutive losses.2

After Anderson got the first two Cubs out in the fifth, he gave up a hit to Altman, who ended up on third base when Mets right fielder Joe Christopher threw wildly as Altman tried to stretch his hit into a double. Anderson walked Mathews, then threw a wild pitch that allowed Altman to score.

Anderson was still pitching in the seventh inning when the Cubs struck for the last time. Leadoff batter Ron Santo reached on an error by third baseman Felix Mantilla, stole second base, and reached third when Billy Williams’s groundball to second was booted by Richie Ashburn. Banks popped out to shortstop, but Altman singled home Santo. Altman stole second and scored on a single by Nelson Mathews. By the time Anderson got the third out, the Cubs were up 5-1.

The Mets tried to score in the eighth inning, but they hit into a triple play instead. Buhl started the inning by giving up singles to Sammy Drake and Richie Ashburn. The next batter, Joe Pignatano, hit a broken-bat line drive into short right field.

Edward Prell of the Chicago Tribune described what happened next: “The runners were on the way when it appeared as if Joe Pignatano’s pop fly would be out of Ken’s [Ken Hubbs, the Cubs’ second baseman] reach. After he speared it, Hubbs had time to set himself for the throw to Banks at first. Neither was there any urgency for Ernie to hurry his throw to André Rodgers because Drake never had a chance to get back to second base.”3 Earlier in the season, Stengel said, “We’ve got to learn to stay out of triple plays.” Clearly, even on this final day of the season, they had not figured out how to do that.

Neither Drake, Ashburn, nor Pignatano would ever play in another major-league game.4 Ashburn and Pignatano retired after the season, while Drake was released by the Mets after batting .192 in the 25 games he played for them in 1962. Ashburn had made the All-Star team that year, batted .306 for the Mets, and was eventually chosen as the Mets’ most valuable player. When his teammate Don Zimmer asked him why he retired after such a good season, Ashburn said, “I could see us losing 100 games again. I couldn’t lose again.”5

After the Mets failed to score in the eighth, Buhl finished the game. First, he got Joe Christopher to pop out to start the ninth. Thomas managed one final hit for the Mets, but was left standing on first. Buhl struck out Ed Kranepool, who had taken over for Marv Throneberry in the seventh inning, and got Mantilla to ground out to finish the game and the season for both teams.

The Cubs finished the season with a .364 winning percentage, their lowest ever. It was the 16th time the Cubs finished in the bottom half of the league. They drew just 609,802 fans, their worst year for attendance since 1943.6

As for the Mets, they finished their inaugural season in last place, an astounding 60.5 games out of first. Casey Stengel told the players after the game: “Fellers, don’t feel bad. This was a group effort. No one player could’ve done all this.”7