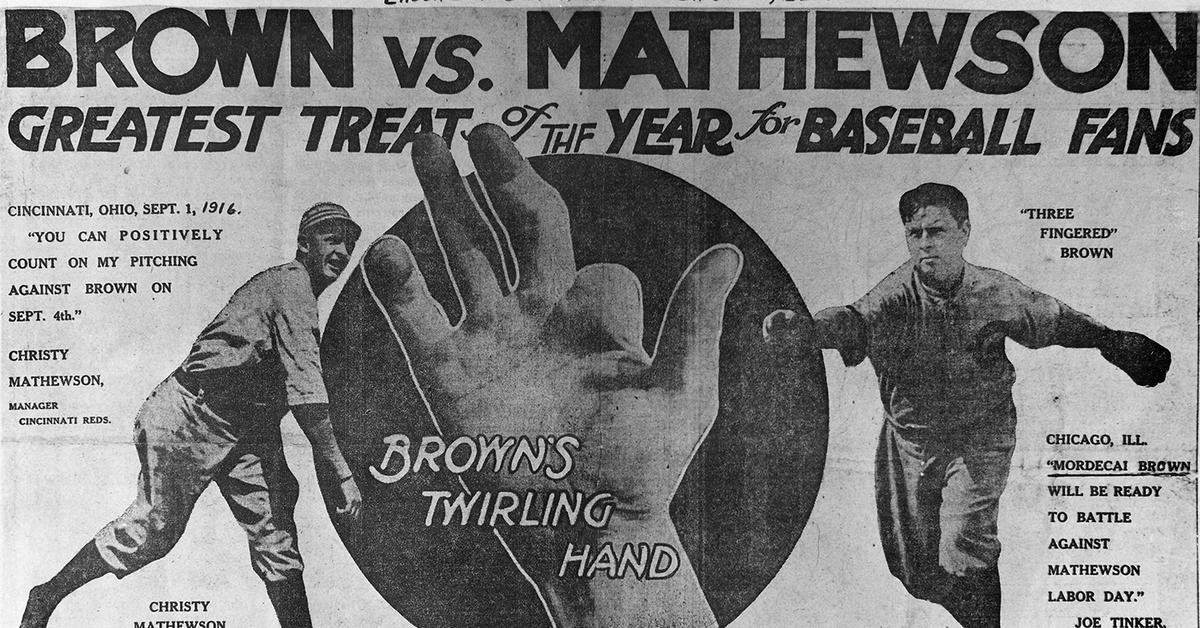 A promotional poster advertising the September 4, 1916 matchup between Mordecai Brown and Christy Mathewson. This game would be the last of 24 times in which the two future Hall of Famer pitchers would face each other. (National Baseball Hall of Fame Library)

“Great Masters Are Through.”1

On September 4, 1916, famed pitching foes Christy Mathewson and Mordecai Brown faced one another for the last time2 in a match viewed by over 17,000 fans3 in Chicago’s Weeghman Park.

Mathewson with his dreaded screwball was one of the greatest pitchers of his era, “compiling a 2.13 ERA over 17 seasons” and setting National League records for “wins in a season (37), wins in a career (373),4 and consecutive 20-win seasons (12).”5 But Mathewson had a rival. One of the most persistent debates of that time concerned who was the better pitcher: Mathewson or Brown.

Mordecai Brown was popularly known as Three Finger Brown because he had lost most of the index finger of what would become his pitching hand in a childhood farm accident. A subsequent fall resulted in a bent middle finger and paralyzed little finger on the same hand.6 Brown’s greatest years were 1904 to 1912, when he won 186 games, including a career high 29 in 1908, and led the Chicago Cubs to two World Series victories.7 At his peak in 1906, Brown had a “microscopic 1.04 ERA.”8

Mathewson’s fans called him “Big Six” because he was like New York’s “Big Six Fire Company” — the “fastest to put out the fire.”9 Mathewson and Brown faced off against each other more than 20 times before their appearance together in this final match.10 In their glory days each served as the linchpin for a rival championship team: Between 1904 and 1907 Mathewson’s New York Giants and Brown’s Chicago Cubs each won the National League pennant twice, and during this period each team also won a single World Series title.

That period of mutual greatness had ended before this final duel. By mid-1916 Mathewson had effectively retired from pitching, having taken on a managerial role with the Cincinnati Reds, and Brown was essentially a backup pitcher.11 “Gone are the days,” the Chicago Tribune lamented, “when Matty and Brownie could give the greatest batsmen in the game a winning argument nine times out of ten.”12 No longer did Brown exercise his “deadly hook” or Mathewson his “famed fadeaway.”13

None of this mattered to their fans. A “great group of baseball rooters stood in the rain for an hour” to pay tribute to these two men with “their lion’s hearts and their master minds.”14

Except for the attraction of seeing Mathewson and Brown, this Labor Day doubleheader otherwise represented the meeting of two lackluster National League teams that would finish the season fifth (Cubs) and seventh (Reds).15 As the media reported, there “was nothing but sentiment to attract a crowd that overflowed the plant to see these past masters of the slab.”16

Same-day advertisements for tickets proclaimed: “Brown and Mathewson Battle.”17 Although the Cubs vs. Reds holiday doubleheader was scheduled to begin at 1:30 P.M., newspapers reported that it still had not been decided “in which section the old rivals would perform.”18 The weather remained in doubt as well, with predictions of probable “thundershowers.”19

Mathewson made it clear before the game that this would be his last time on the mound. “I’m through with pitching,” he told reporters; “I just want to work once more against Brown.”20 He said he was determined to pitch the full game, “even if they make a million runs off me.”21 As for Brown, the Cubs manager — the great Joe Tinker — promised he would to keep him “in the box as long as Matty sticks.”22

The mass of people that gathered to watch these two past masters play overflowed the stands. A “fringe of people was strewn around the outfield,” necessitating ground rules, “a hit into this overflow being good for two bases.”23

During the pregame festivities, Brown and Mathewson each received a large bouquet of American Beauty Roses from Cubs owner Charles Weeghman, and the “two great veterans” had their pictures taken “hand in hand.”24

Thanks to Mike Prendergast’s expert pitching,25 the Cubs took the first game 3-0. As Brown and Mathewson came out to warm up for the second game, they “both got a great reception.”26 The game began well for Brown, who “retired the Reds in the first half of the first inning without scoring” and he was “wildly cheered” as he walked off the field.27

Things unfolded less promisingly for Mathewson. “Laughing Larry” Doyle of the Cubs “singled to right” and scored on Joe Kelly’s “triple to center.”28 Kelly “followed over on a sacrifice fly” on which right fielder Tommy Griffith “made a fine catch near the fence.” That season’s home-run leader,29 Cy Williams, “singled, but was out stealing.”30

After that the Reds “began to hit it up,”31 scoring once in the second inning on singles by catcher Ivey Wingo, first baseman Emil Huhn, and Mathewson himself. One reporter observed that the Reds showed their fondness for Mathewson “by working their heads off to hold the Cubs down,” with especially impressive efforts made during the second inning by Reds left fielder Earle “Greasy” Neale who had come in “on the dead run” making “a beautiful diving catch” of Art Wilson’s “hard liner to left” and by Tommy Griffith who “went a mile” for shortstop Chuck Wortman’s long fly, nailing it “just in time to save a triple.”32

The game’s opening innings represented “a see-saw battle of bats and wits.”33 The Cubs led 2-1 by the end of the second inning. The teams were tied, 3-3, in the third, and in the fourth the inning’s lone run put the Reds into the lead for the first time. In the fifth, a walk to right fielder Max Flack was “Matty’s only pass.”34 With two more scoring runs in the sixth, the Reds’ lead continued to widen and when Mathewson came out for the ninth inning the Reds “had the enemy ten to five.”35

Mathewson was “tired, but game” and “went at his work like a master,”36 but the Cubs “rallied at the finish”37 and got two men on base. Cubs first baseman Vic Saier hit the ball “over the short fence”38 for the game’s only home run. The score was Reds 10, Cubs 8, with the Cubs managing to put “tying runs on the bases in the last half round” when first baseman Fritz Mollwitz, batting for Charlie Pechous, “flied the game over.”39

“Mathewson and Brown Battle Like in Old Days,”40 a headline proclaimed the next day. Many commenters stressed that the two pitchers had put in a fairly even showing, with the Cubs touching “Mathewson for fifteen hits, while the Reds gathered nineteen off Brown.”41 Brown scored two runs and Mathewson one, and each pitcher also “gave only one base on balls,” a fact regarded as “a treat in itself.”42

The Sporting News expressed admiration for the hurlers’ tenacity in working “steadily and grimly through the full nine innings.”43 One journalist noted that “neither would admit the weariness that overcame him as the long struggle wore on[,]”44 and was especially impressed by an exchange observed during the last half of the ninth, when Brown was on second. Cubs manager Tinker offered to “give him a runner,” but “Brownie shook his head, sticking to the paths and eventually scoring his run.”45

Despite such positive gestures, there was ultimately no disguising the number of runs batted in. As a reporter for The Sporting News wrote, “Imagine either of them, when at his best, allowing any such bombardment as that!”46 No one had really expected otherwise, though. Mathewson had already basically stopped playing and Brown would retire after the season’s end. What mattered to the “immense concourse of Chicago bugs”47 who crowded the stands and the field for this final duel wasn’t so much how these pitchers were likely to perform as the chance to pay homage to two of the sport’s great heroes.

For many Americans who had grown up during the first decades of the twentieth century, Brown and Mathewson’s pitching rivalry represented a magical part of their childhood. In 1912, when he was around 12 years old, the future Nobel Prize-winning author Ernest Hemingway sent 35 cents to The Sporting News asking to purchase some “baseball action pictures,” including ones of “Mathewson ” and “Mordecai Brown.”48 In 1920 in his first published novel, This Side of Paradise, F. Scott Fitzgerald included a fictionalized version of his younger self wondering if “Three-finger Brown was really a better pitcher than Christy Mathewson.”49

Although the match on September 4, 1916, represented far from their best performance,50 in important ways both Brown and Mathewson emerged victorious. In a month notable in Illinois for the early arrival of a “killing frost,”51 these two baseball greats made their immortal last stand. “In spite of the brutal manner in which the two veterans were treated by the opposing battlers,” one writer observed, it was “an inspiring sight to see them matched once more.”52 In their final showdown, Brown and Mathewson played with “the brains and courage of yore,” and a “spirit that would never acknowledge defeat.”53

In addition to the sources cited in the notes, information on this game, and on the pitching careers of Brown and Mathewson, came from Baseball Reference.com and Retrosheet.org.

Note: Play-by-play data for this game is not available on retrosheet.org; most of the details for specific plays came from Sanborn, I.E. “Matty Beats Miner Brown,” Chicago Tribune, September 5, 1916: 15, and Ryder, Jack. “Mathewson Bests Mordecai Brown,” Cincinnati Enquirer, September 5, 1916: 8. My thanks to Janet Wall of the US National Oceanic and Atmospheric Administration (NOAA) for assistance conducting historical weather research.

2 They had met 23 times previously with Mathewson winning 12 times and Brown 11 times.

3 The game had “over 17,000 paid admissions,” according to “Notes of the Game,” Cincinnati Enquirer, September 5, 1916: 8. Weeghman Park had a capacity of 18,000 ticketed seats but popular games could result in an overflow of fans “standing in the back of the grandstand or on the field” (See Mike Lynch, “Chicago Feds open Weeghman Park, later known as Wrigley Field,” April 23, 1914, SABR Games Project, https://sabr.org/gamesproj/game/april-23-1914-chicago-feds-open-weeghman-park-later-known-wrigley-field, accessed June 14, 2020). This kind of fan overflow onto the field was reported with respect to this game.

4 This was later tied by Grover Cleveland Alexander.

11 Before he was traded to Cincinnati in late July 1916, “Mathewson appeared in just twelve games” and although Mordecai had contributed to rebuilding team unity that year, he “offered only occasional help on the mound”; See Cindy Thomson and Scott Brown, Three Finger: The Mordecai Brown Story (Lincoln: University of Nebraska Press, 2006), ebook.

21 “Matty and Brown in Pitching Duel.”

22 “Matty and Brown in Pitching Duel.”

24 “Notes of the Game,” Cincinnati Enquirer. A reproduction of this photograph appears in Thomson and Brown, Three Finger: The Mordecai Brown Story.

25 He allowed four hits and struck out two batters.

32 “Notes of the Game,” Cincinnati Enquirer.