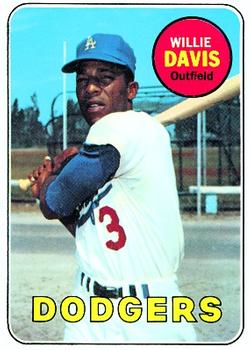 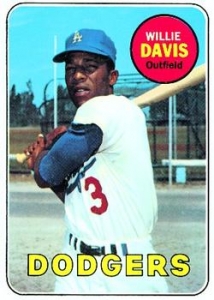 Zack Wheat, more than four decades after playing his last major-league game, experienced a revival of fame in 1969 thanks to another Dodgers slugger who put on a hitting clinic against National League hurlers. Willie Davis tied Wheat’s 29-game streak on September 1, 1969, in a game against the Mets; it ended two games later at 31, when he went hitless in four at-bats against the San Diego Padres, an expansion team in its first major-league season. “I’m just trying to make contact now,” the veteran center fielder said on explaining his change to a 40-ounce bat from a 31-ounce one.1 In turn, Davis’s batting average rose from .250 in 1968 to .311 in 1969.

A late-season letter to The Sporting News from David H. Nix, executive sports editor of the Yale News, attributed the improvement to bat size and physics combined with Davis’s technique: “By choking up a couple of inches, he was making better contact without sacrificing control.”2

The Padres drew 6,917 fans to the ballpark for the September 4 game against the Dodgers that stopped Davis;3 it kicked off an eight-game road trip for the Dodgers, against the Padres, Braves, and Astros. San Diego – in its inaugural season – swept the four-game series, an unlikely scenario given team’s 52-110 record compared with the Dodgers’ 85-77 performance in 1969. Davis and his Dodgers cohort split each two-game series against the other teams.

Maury Wills led off the top of the first inning with a single against Dick Kelley and, though no longer the speedster of old – he led the National League in stolen bases from 1960 to 1965 and the major leagues in 1962 and 1963 – stole second base. Manny Mota grounded to Padres third baseman Van Kelly and Davis made his first out of the game with a grounder to second baseman Jose Arcia that moved Wills to third. Wes Parker ended the half-inning with another 4-3 groundout.

Dodgers ace Bill Singer, who finished 20-12 in 1969, began the bottom of the first by plunking Arcia. San Diego looked as though it could strike an early blow against its Southern California rivals when Roberto Peña singled and Arcia advanced to second base. Ollie Brown struck out; Arcia went to third on Al Ferrara’s fly to right fielder Andy Kosco. With runners at the corners, Singer prevented the Padres from scoring when Nate Colbert grounded to rookie second baseman Ted Sizemore.

After Wills got a two-out single in the top of the third and moved to second base on Chris Cannizzaro’s passed ball,4 Kelley walked Manny Mota; Padres manager Preston Gomez called in Gary Ross to relieve his starter. Davis came up with Wills in scoring position, but Ross put out the fire, getting another groundball to second base to end the threat.

The Padres then came alive against Singer, scoring two runs in the bottom of the third as Peña singled and moved to third on Brown’s single; Ferrara’s double to right-center scored them both.

San Diego added a run with Ferrara’s homer leading off the bottom of the sixth. Walter Alston used a pinch-hitter for Singer in the top of the seventh inning and brought on Ray Lamb to pitch the bottom half.

The Dodgers never scored and managed only four singles – two by Wills. Singer in the fifth and Kosco in the ninth added the others. Davis grounded out in his first three opportunities and struck out in in the eighth inning – his last at-bat – with Mota on base via a walk. Ferrara, the game’s hero and a Dodger before heading to San Diego in the 1968 expansion draft, said, “Those guys (the Dodgers) are my friends, but we have had our noses rubbed into the dirt all season. Now we have a chance these four weeks to get even.”5 It didn’t quite happen – the Padres went 9-15 over the rest of the season and suffered a three-loss sweep at Dodger Stadium a week later.

Davis’s first season in professional baseball forecast great potential. In 1959 the Arkansas-born Reno Silver Sox outfielder led the Class C California League in runs scored, hits, doubles, and triples; his performance earned him the league MVP. Davis played the 1960 season with the Spokane Indians, leading the Triple-A Pacific Coast League in runs scored, hits, and triples before Los Angeles brought him to the majors in September.6

Although Davis’s 31-game streak is a signal achievement and was a Dodgers franchise record as of the end of the 2019 season, speed was his trademark; he led the 1959 California League in stolen bases and tallied 398 for his major-league career. At the time of Davis’s death in 2010, former teammate Manny Mota recalled, “The thing about Willie Davis that left the greatest impression on you was the sight of him running. Once in spring training, I saw him score from second base on a fly ball to center field. He was the only person I ever saw do that.”7

Davis was philosophical about the end of the streak: “It was great while it lasted. All I can do now is start again tomorrow and hit in every game for the rest of the season.”8

His improved batting eye was not only evident from the streak but also his number of strikeouts in 1969. He whiffed 39 times in 540 plate appearances. The 1969 season began a six-year stretch when he hit at least .285.

During the streak, the Dodgers notched an 18-13 record. They finished the season at 85-77 and fourth in the National League West.

In addition to the sources cited in the Notes, the author used Baseball-Reference and Retrosheet.org for team and player pages, box scores and play-by-play information: