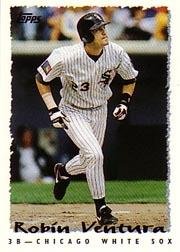 Chicago White Sox third baseman Robin Ventura joined the record books by blasting two grand slam home runs in a 14-3 victory over the Texas Rangers in a Monday night game at The Ballpark in Arlington. The White Sox put up eighteen hits and scored in each of the first five innings in a dominant performance highlighted by Ventura’s accomplishment. A Labor Day crowd of 18,036 survived the 95-degree weather to be on hand to witness Ventura connect in the fourth and fifth innings.

The White Sox were 53-64 entering the contest, but they were riding a five-game winning streak. The Rangers had a record of 60-59. Chicago’s Jason Bere faced off against Texas starter Kevin Gross. Chicago’s Lance Johnson wasted no time, as he parked a Gross offering deep into the right field stands for a home run to lead off the game. Texas slugger Juan Gonzalez repaid the favor, lining a deep home run down the left-field line in the bottom of the first off Bere with Otis Nixon on base (walk, stolen base). The Rangers had a 2-1 lead after one inning.

Ventura led off the second and doubled to right. Lyle Mouton walked and Ray Durham reached safely on a bunt single to the pitcher. The bases were loaded for Mike LaValliere. He grounded a weak ball to third baseman Mike Pagliarulo who fielded the ball and stepped on third for the force out, but Ventura crossed the plate with the tying run. Chicago added a go-ahead run in the top of the third when Tim Raines singled and scored on Mouton’s double down the right-field line.

The Chicago squad would hit for the cycle in the top of the fourth. Ozzie Guillen tripled with one out and scored on Johnson’s single. Raines followed with a single. After Dave Martinez moved the runners up on a fielder’s choice to first, Frank Thomas drew a walk. Texas manager Johnny Oates went to his bullpen and handed the ball to Dennis Cook. Ventura promptly sent Cook’s offering 423 feet over the right-center field fence, clearing the bases. Mouton hit his second double and Durham tripled, driving in Mouton. LaValliere grounded out, but Chicago had scored 6 runs on 6 hits and led 9 to 2. Bere gave up an unearned run to Texas in the bottom half of the fourth, on an error, single and sacrifice fly. That would be the last run the Rangers would muster.

Cook, who had given up two runs in one-third of the fourth inning, exited the game, to be replaced by Danny Darwin at the top of the fifth. After retiring the first two runners on two balls hit in the infield, Darwin gave up back-to-back line drive singles to Raines and Martinez. Frank Thomas again drew a walk, loading the bases once more for Ventura. The left-handed hitter parked Darwin’s pitch into the right field bleachers for his second grand slam of the game and 25th home run of the season.

When Ventura came to the plate in the seventh inning, the fans wanted to show their appreciation for his accomplishment. He received a standing ovation from the home crowd, a tribute to his amazing feat. After the game, Robin told reporters, “You definitely have to get lucky to do that. To have the bases loaded and do that, it’s kind of a freak thing….You get an opportunity to do that when you hit behind Frank [Thomas] because he walks a lot. They’d rather not pitch to him, so I’m in that situation more.”1

The White Sox added a run in the eighth inning off of Darwin, as Guillen drove in Mouton on a grounder to second. Mouton, the Chicago rookie outfielder, had a 3-for-3 performance plus a walk at the plate, giving him 11 hits in his last 17 at-bats, good for a .647 clip. He also scored two runs. The next day (September 5th) Mouton had a 3-for-4 game against the Rangers. Left fielder Raines had three singles in four trips to the plate and scored three runs. Chicago’s starting pitcher Jason Bere allowed three runs (two earned) in six innings, a quality start, as he picked up his seventh win of the season. 80 of his 120 pitches were thrown for strikes. He had walked four but had given up only 3 hits. The White Sox relievers Scott Radinsky and Rod Bolton pitched the final three frames and only allowed two base runners on a single and walk in the bottom of the ninth.

In his 3-for-5 plus a walk performance, Robin Ventura had 10 total bases, 3 runs scored and 8 runs batted in, which tied a White Sox record for most RBI in a game, set by Jim Spencer in 1977.2 Chicago roughed up the four Texas pitchers for 18 hits, which moved the club to within .0001 of the Cleveland Indians as the best hitting ball club in the American League (.288).3 Another single season record was set, as Ventura’s two bases loaded home runs brought the major league season total to 111 grand slams,4 and there was still close to a month left in the season. The current record for most grand slams hit in the major leagues in one season is 176, set in 2000.5

Robin Ventura became just the eighth batter to have hit two grand slams in the same game, and he was the first since Baltimore Oriole Frank Robinson, who accomplished the feat 25 years earlier on June 26, 1970.6 Robinson also had connected in successive innings, as did Baltimore’s Jim Gentile (May 9, 1961) and Detroit’s Jim Northrup (June 24, 1968). After the game, Robin Ventura said, “I’m sure I’ll reflect on it another day. It’s nice, but you don’t stop playing just because you do something.”7

1. Four seasons after this spectacular performance, Ventura became the first (and only, as of 2017) major league player to hit grand slams in both ends of a doubleheader, when he smacked two against the Milwaukee Brewers on May 20, 1999.8 That was the same year that Tatis and Garciaparra each hit two grand slams in one game.

2. Robin Ventura shares another item in common with Frank Robinson. In 2012, Ventura became the manager of the White Sox, the team he hit the two grand slams for. In 1988, Robinson became the skipper for the Orioles.