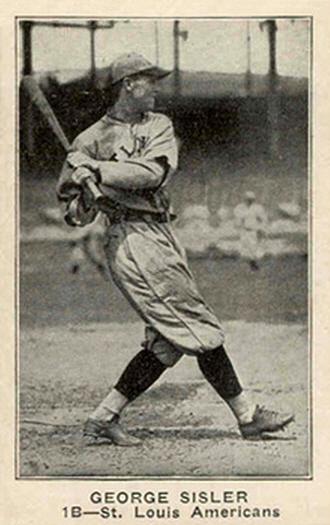 It’s been a long and weary wait
Since back in 1888,
When we last copped the bunting.
So having such a rosy chance
The fans are prone to look askance
At pessimistic grunting.
So if their hopes don’t fructify
And from our pole no pennants fly
’Twill be, indeed, a pity.
But if the boys should make the grade
We’ll honor them with a parade
And they will own the city.

In 1922 the city of St. Louis had not seen a major-league baseball championship since the St. Louis Browns won the American Association pennant in 1888. The St. Louis Browns of the American League finished in third place in 1921, the team’s best season in 19 years. The 1922 Browns were even better; on September 4 they were just one game behind the first-place New York Yankees. The Browns were 40-16 at home and would play the final 21 games of the season there, while the Yankees would play 18 of their final 25 games on the road. The Browns had indeed “a rosy chance” to win the pennant.

The 1922 Browns were led by 45-year-old Lee Fohl, a knowledgeable and popular manager. On September 4, first baseman George Sisler led the major leagues in hits (221), stolen bases (44), and batting average (.419); outfielder Ken Williams had 33 home runs (five more than Babe Ruth) and led the major leagues with 127 runs batted in; and outfielder Johnny Tobin, “the best lead-off man in baseball,”1 was third in the AL with 107 runs scored.

While the Browns were rising, the Cleveland Indians were falling. After winning the 1920 pennant and finishing second in 1921, the Indians were a .500 ballclub in 1922. Tris Speaker, Cleveland’s 34-year-old playing manager, was a “grizzled Texan, his hair as gray as that of a man twice his age.”2 On September 4, his .377 batting average ranked third in the league, behind Sisler and Ty Cobb. Speaker had been limited to pinch-hitting since suffering a leg injury on August 24.

By convincing margins of 10-3 and 12-1, the Browns swept a doubleheader from the Indians on September 4 in St. Louis. The third game of the series, on Tuesday, September 5, promised to be a closer contest. The starting pitcher for the Browns was Ray Kolp, a second-year man with a 12-4 record and a 3.68 ERA. The Cleveland starter was rookie James “Dan” Boone. On August 20, Boone had hurled a 12-inning shutout to defeat Walter Johnson and the Washington Senators, and on September 2 he threw a four-hit shutout against the Chicago White Sox.

About 10,000 enthusiastic Browns fans came to Sportsman’s Park for the September 5 matchup on a 95-degree afternoon.3 Umpiring the game were former major-league players  Bill Dinneen behind home plate and George Moriarty at first base.

The Browns quickly jumped on Boone. Tobin led off the bottom of the first inning with a single to center field. Eddie Foster grounded into a force out at second base, and Sisler singled to right field, sending Foster to third. (With this hit, Sisler extended his hitting streak to 35 games. The streak would reach 41 games before ending on September 18.) After Williams popped out, Bill “Baby Doll” Jacobson knocked in Foster with a single, and Sisler advanced to third. On a double steal, Jacobson stole second and Sisler stole home.

The Browns scored two more runs in the third inning. Foster reached base on an error; Jacobson singled to right field; and Marty McManus, a 22-year-old second baseman, drove the pair home with a double to center field.

The Indians scored their first run in the top of the fourth inning when Joe Connolly drew a walk and Joe Sewell doubled to left field. The St. Louis barrage continued in the bottom half. Singles by Wally Gerber and Ray Kolp, and a base on balls to Sisler, loaded the bases for Williams, who slugged the first pitch from Boone over the right-field wall for a grand slam, his 34th home run of the season.4 The score was now St. Louis 8, Cleveland 1. That was all for Boone, who was relieved by Jim Lindsey in the fifth inning.

It looked dismal for Cleveland, but Kolp weakened in the sixth inning, and the Indians rallied. Larry Gardner led off with a walk. Joe Sewell singled to center field, and his brother Luke Sewell, a 21-year-old rookie, drew a walk to load the bases. Stuffy McInnis singled to center field, driving in two runs. Speaker, pinch-hitting for Lindsey, knocked in a run with a single to right field, prompting Fohl to replace Kolp with Hub Pruett, a 22-year-old rookie southpaw. Facing Pruett, pinch-hitter Riggs Stephenson grounded into a force out, scoring McInnis, and Charlie Jamieson doubled to center field, scoring Stephenson. The St. Louis lead was cut to 8-6.

After Pruett walked two batters in the seventh, Fohl brought in spitballer Urban Shocker, the St. Louis ace, who had pitched a complete game the day before. Shocker retired two batters to get out of the seventh-inning jam, but the Indians battered him in the eighth with singles by Jamieson, Connolly, Gardner, and both Sewells. Three runs scored and the Indians led, 9-8.

Pat Collins pinch-hit for Shocker to lead off the bottom of the eighth inning, and he singled to left field off reliever James Edwards. Cedric Durst entered the game as a pinch-runner, and Tobin laid down “a perfect sacrifice bunt” to move Durst to second base.5 Foster was hit by a pitch, and Sisler beat out an infield hit that bounced high off the plate. With the bases loaded, Williams swung for the fences, but came up a little short, lifting a fly ball to Connolly in deep center field; Durst tagged and scored the tying run, and Foster went to third. When Sisler attempted to steal second, catcher Luke Sewell threw wildly, and Foster scampered home with the go-ahead run.

Fohl called on knuckleballer Wayne “Rasty” Wright to get the final three outs. After getting the first out, he gave up a single to pinch-hitter George Uhle and a base on balls to Jamieson, and “the crowd groaned.”6 Bill Wambsganss lined to Williams in deep left field for the second out. The third out came on a close play at second base:

“Connolly banged a mean hopper over second. McManus was on the ball like a hawk. He refused to take the chance of throwing to [shortstop] Gerber, and dashed toward the bag himself, sliding desperately to be sure of beating Jamieson to the base.”7

The final score was St. Louis 10, Cleveland 9. The day got even better for St. Louis when word arrived that the Yankees had lost both games of a doubleheader against the Boston Red Sox. The Browns were now in first place, a half-game ahead of the Yankees.

The Browns went 13-7 in the remaining games of the 1922 season, but the Yankees went 16-7 and won the pennant by a one-game margin. Sisler batted .420 for the season and was named the American League’s Most Valuable Player. Williams led the league in home runs (39) and runs batted in (155). The 1922 Browns recorded the highest winning percentage (.604) of any Browns team from 1902 through 1953.