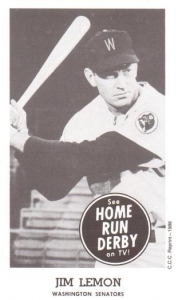 Washington Senators outfielder Jim Lemon struggled offensively over the final five weeks of the 1958 season. In the Senators’ final 36 games, he didn’t hit a home run and drove in just three runs.

After the season Lemon underwent surgery on his left knee. With his knee repaired and after receiving some advice in the Senators’ final series of the 1958 season, Lemon showed improved offensive production in 1959.

According to the Washington Post sportswriter Shirley Povich, the tip Lemon received came from a knowledgeable source.

“Ted Williams had a batting tip for Jim Lemon on his last appearance in Washington (in 1958). He advised Lemon to stop crowding the plate because pitchers were getting him out on offerings that were high and tight.”1

Lemon’s improvement was on display against the Red Sox for the entire 1959 season and especially in the second game of a three-game series in the first week of September. In the 14 games against the Red Sox going into the series, Lemon had hit .360 with six home runs and 16 RBIs.

On September 4 the sixth-place Red Sox and last-place Senators opened a three-game series at Griffith Stadium. On the previous weekend the teams had split a two-game series in Boston, with Boston winning the opener, 4-3 in 10 innings, and the Senators winning the second game, 7-4. After the split, Boston lost twice in Baltimore on September 2 and 3, while the Senators lost two to the Yankees in New York on the same dates.

The Senators won the series opener, 4-3, to hand the Red Sox, their fourth consecutive loss.

Lemon made the second game of the series memorable for the crowd of 4,283. He staked the Senators to a 1-0 lead in the bottom of the first with a run-scoring double off Boston starter Bill Monbouquette.

In the top of the second inning, Lemon prevented the Red Sox from tying the score when he made a leaping catch against the left-field fence to rob Frank Malzone of a home run.

In the top of the third inning, Boston’s Pumpsie Green drew a two-out walk off Senators starter Camilo Pascual. Jackie Jensen followed with his 27th home run of the season to give Boston a 2-1 lead. The lead was short-lived.

Monbouquette struck out Senators center fielder Lenny Green to lead off the bottom of the third inning. The Red Sox quickly lost control.

Faye Throneberry singled, bringing Lemon to the plate, and Lemon hit a home run to left-center, giving the Senators a 3-2 lead. Errors by the Red Sox on the next two hitters prolonged the inning. Harmon Killebrew reached second base when center fielder Pumpsie Green dropped his popup in short right field. Red Sox shortstop Don Buddin booted Roy Sievers’ routine groundball and Killebrew scored as the ball wound up in left field. Then things got worse for the Red Sox.

Hal Naragon singled, sending Sievers to second. Reno Bertoia’s double scored Sievers and sent Naragon to third. Pascual, a good hitting pitcher who batted .302 in 1959, fouled out to first baseman Pete Runnels for the second out. Monbouquette walked Billy Consolo to load the bases and prompt Boston manager Billy Jurges (who had started the season as a Senators coach) to replace Monbouquette with reliever Al Schroll.

Schroll walked Lenny Green and Throneberry on eight pitches to force in two runs. Earl Wilson was brought in to face Lemon with the bases loaded, and Lemon hit Wilson’s 2-and-1 pitch into the left-field seats for a grand slam. Killebrew struck out to end the Senators’ 10-run inning.

With the two home runs – his 27th and 28th of the season – Lemon tied two major-league records. He became the 13th player to hit two home runs in one inning and became the seventh player since 1901 to drive in six runs in an inning. (On September 23, 1890, Ed Cartwright of the St. Louis Browns  of the American Association hit two home runs and drove in seven runs in the Browns’ nine-run fifth-inning of a 21-2 victory over the Philadelphia Athletics in St. Louis.)

The most recent major-league player to drive in six runs in an inning was on the Senators bench to witness Lemon’s feat. Sam Mele, who became a Senators coach on July 4 when Jurges left to become the Boston manager, drove in six runs in one inning for the Chicago White Sox on June 10, 1952, in a 15-4 victory over the Philadelphia Athletics in Philadelphia. Mele had a three-run home run and bases-loaded triple in Chicago’s 12-run fourth inning.

The Senators added a run in the sixth on a run-scoring single by Pascual and closed out the scoring in the eighth inning on a two-run home run by Sievers.

Pascual cruised to the complete-game five-hitter. He walked one and struck out three as he improved to 14-10 for the season.

Nine of the Senators’ 14 runs were unearned as Boston made four errors, which prompted a Boston newspaper to declare in a headline over the box score, “Hurry Up Football.”2

Boston won the series finale, 2-1, as Tom Brewer outdueled Pedro Ramos, and went on to win 13 of their final 18 games. The Red Sox, who were in last place when Jurges succeeded Pinky Higgins as manager, went 18-12 in August and 13-10 in September to finish with a 75-79 record. But the strong finish was quickly forgotten as the Red Sox would not have another winning season until 1967.

After losing the series finale to Red Sox, the Senators went 8-5 over the next two weeks to improve to 63-86 on September 20. But they lost their final five games and at season’s end occupied last place for the third consecutive season (and fourth in five). They also reached 90 losses for the fifth consecutive season.